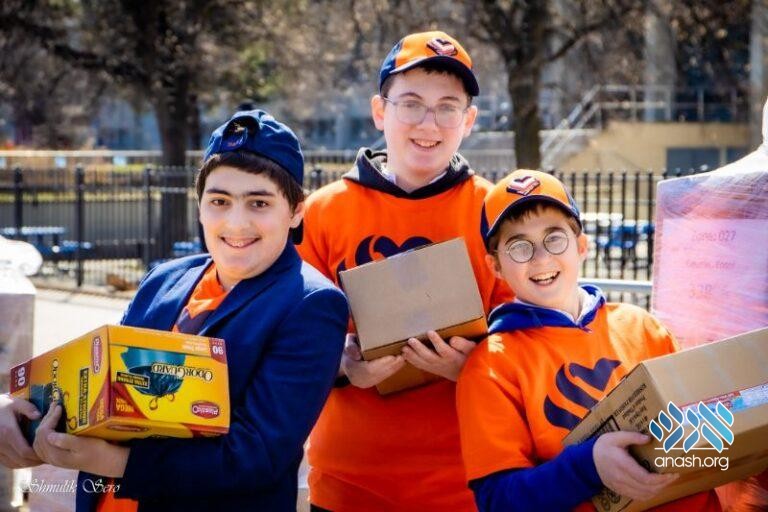 From the Anash.org Inbox: Following Igud Hamelamdim’s massive show of honor for Crown Heights Rebbis, one mechanech shared what he felt was its most valuable impact.

By a Crown Heights Rebbi

Twice a year, before Pesach and before Tishrei, the Igud Hamelamdim organization run by Rabbi Avrohom Bluming, organizes a massive distribution of basic items for Crown Heights Rebbis. They deserve a tremendous thank you for their support and for everything they do.

But I would like to point out one aspect of what they did this year, that may have gone unnoticed.

This year, instead of the distribution taking place in Flatbush, they organized for it to happen right here in Crown Heights. They had a street blocked off and saved the Rebbis from having to make a trip to get it. But there was something so much more significant that happened there.

The biggest thing that they did was they got our children to load up the trucks of their teachers. This was an incredibly significant and important Chinuch lesson for the children on how they should treat their Rebbis (and their parents!).

In Kuntrus Inyana Shel Toras Ha’Chassidus the Rebbe explains that Chassidus has four main purposes and that each of these lay at the essence of Chassidus. One of the purposes that is outlined there is Lishanos Midosav Hativi’im, to change our natural Middos and even more, Lishanos Teva Midosav, to change the nature of our Middos.

Middos Tovos are the essence of Chassidus. Bringing this idea home to our students is perhaps the most meaningful addition to this year’s program.