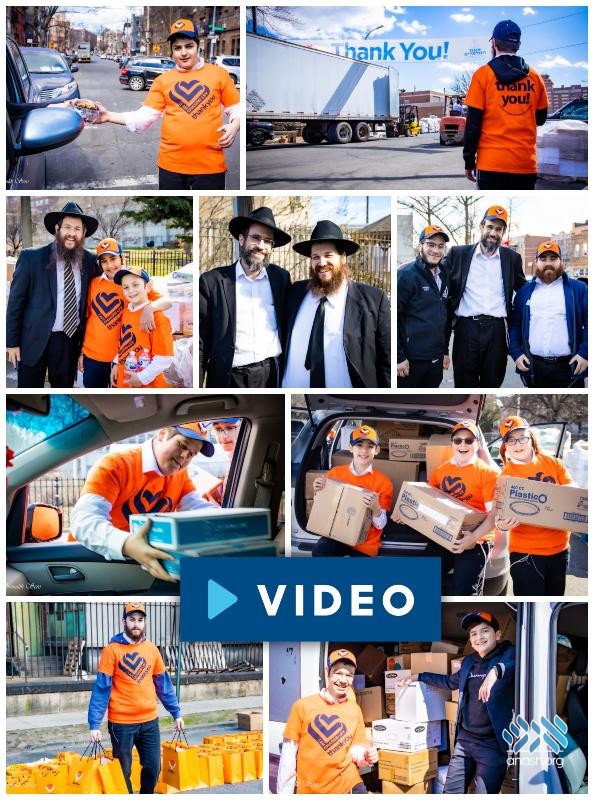 Community members and students showed up last Sunday to thank 280 Rebbis of Crown Heights and show their admiration for what they do.

Hundreds of cars rolled down Kingston Avenue last Sunday, as Chabad educators from across the Crown Heights area were showered with thanks and appreciation for their tireless devotion towards their students.

The annual event, run by Lubavitch Chinuch Organization Igud Hamelamdim in partnership with Chasdei Lev, is usually held in a central location in Brooklyn along with numerous other frum schools. This year however, Igud hosted the event in the Crown Heights community, saving Melamdim the time of driving each way.

Full length trailers unloaded close to 300 pallets of food and home items on Kingston Ave between Rutland and Winthrop which was blocked off by police for the event. The pallets marked with each teacher’s name were organized along both sides of the street ready for pickup. The Rebbis were welcomed with a large Thank You Banner and joyous music, and a special thank you gift awaited them on their way out.

But the real clincher was this: students from across Crown Heights wearing bright attire and bearing broad smiles were amongst the majority of the volunteers participating in loading up the cars with discounted staples for Yom Tov.

“Bringing the children to volunteer is in itself a major chinuch experience,” said Rabbi Avrohom Bluming, director of Igud Hamelamdim. “The students get to actively show appreciation to those who give all of themselves to their precious students.”

Igud Hamelamdim strives to put educators in the spotlight and at the forefront of our most respected leaders and visionaries; boosting the spirit and drive of those who’ve dedicated their life’s mission to teaching our precious children. For the past 5 years, they have been devoted to providing educators with empowerment and support with which to empower and nurture their students. Strong educators produce strong students who then go on to change the world.

Sunday’s program was weeks in the making and gave teachers an opportunity to order top-quality discounted Pesach staples. Weeks of vigorous planning and organizing and hours of preparation lended itself to a seamless distribution. A number of non-Jewish residents in the area inquisitively approached the distribution volunteers and were impressed to hear that the huge operation was solely devoted to teacher appreciation. The adults, teenagers and children who helped out at the event left feeling uplifted and inspired.

One such student who participated in the distribution is Berel Vogel, a fifth-grader at Oholei Torah, who told Rabbi Bluming how excited he was to be participating in an afternoon of appreciation for his teachers. In his words: “It’s so nice to honor our Rebbis who work so hard with their classes.”

A Yom Tov appreciation for Morahs is likewise being organized by sister organization Igud Hamechanchos in gratitude for their holy work.

The first order of gratitude is extended to the honorable administration of Yeshiva Oholei Torah, for taking initiative and generously sponsoring the entire costs of their yeshiva’s share in this Chasdei Lev project. We are very grateful to them.

Special thanks to the community members who stepped forward to cover the costs of this important project, among them: Dovid and Malky Smetana, Chaim Tzvi Nash, Levi Eckhaus, Sholom Laine, Moshe Drizin and OK Kosher. Thank you to Yossi Hershkop of Kamin Health for sponsoring food items for the volunteers. Thanks to R’ Chanina Sperlin and R’ Eli Cohen for arranging the street closure.

A big thank you goes to all the adults and children who volunteered to thank our teachers, and to Rabbi Yossi Bryski for organizing the operation along with Yossi Rapp, Yisroel Friend and Avrohom Gorman.

A Yasher Koiach to the Yeshivos for partnering with Igud Hamelamdim in covering the expenses, and an added thanks to R’ Yossi Langzam for arranging a crew for cleanup.

For more information about Igud Hamelamdim’s work for chinuch and to support such initiatives, visit IgudHamelamdim.org.