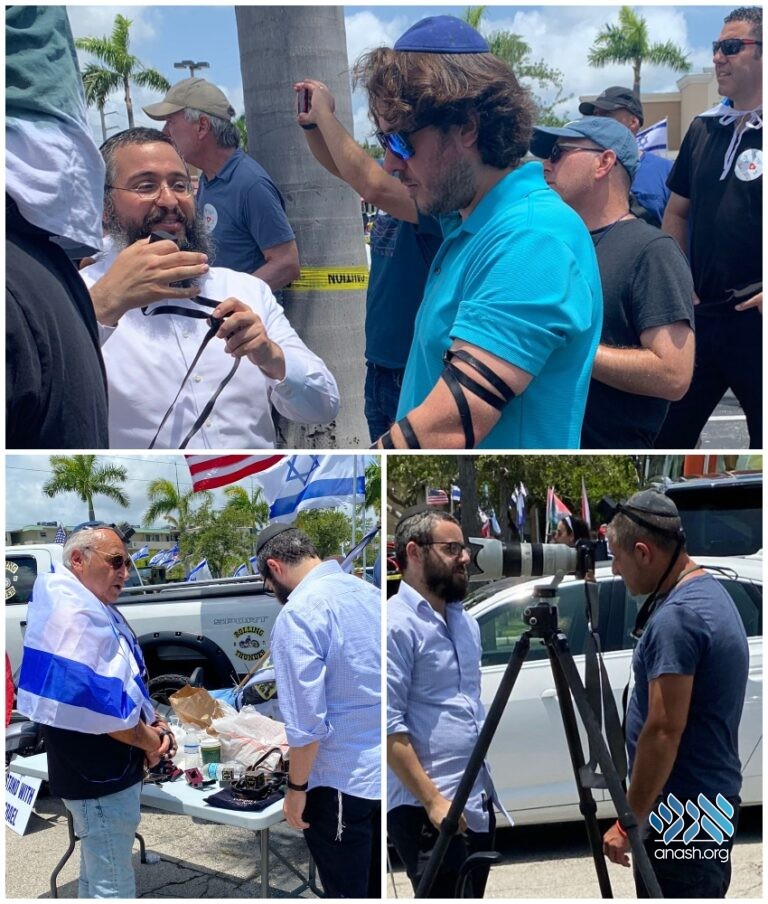 180 yidden put on Tefillin, 180 people lit Shabbos candles and $180,000 is being raised in 18 days to beef up security at Chabad of South Broward in Florida following 3 anti-Semitic attacks in Hallandale Beach.

Chabad of South Broward Headquarters was the scene of three anti-Semitic attacks that took place over ten days, from May 14 — May 23. One man was arrested for a hate crime, for dropping feces twice at the Chabad Center, for scaring and threatening Rabbis and parents at Chabad of South Broward, for spitting at the Menorah, and for cursing at Synagogue and Shul bystanders that “all Jews should die”!

The Rebbe always said that when terror strikes Israel and is not dealt with relentlessly until victory is 100% complete, it opens the door to terror and anti-Semitic violence in the USA and around the world.

Chabad of South Broward Headquarters, under the leadership of Rabbi Raphael Tennenhaus for 41 years, since its inception, is responding to this Hallandale Beach terror act and all the violence against Jews in Israel and around the world, with light, additional Torah study, and Mitzvah Campaign initiatives.

“Torah and Mitzvahs protect the Jewish people everywhere. When a Jew puts on Tefillin in South Broward, it helps protects soldiers and citizens in Israel” Rabbi Tennenhaus said.

At this past Sunday’s Support for Israel Rally in Hallandale Beach, Chabad Rabbis and laymen put Tefillin, a Major Mitzvah that brings Divine Protection to Jews everywhere, on 180 men and teenagers, and distributed 180 candlesticks and candles to women and girls of all ages. The Mitzvah of candle lighting Friday evenings is a blessing for peace and harmony in the home and in the world.

In addition, an Emergency Security Campaign is being launched to raise $180,000 in a period of 18 days to beef up security at Chabad’s Headquarters – the Main Chabad Center in South Broward with 25 Satellite Centers. The $180,000 will cover a year of security and has been organized by a team of experts in protecting Houses of Worship and schools.

Open from 5 AM until often past midnight most days of the week, Chabad is reaching out to friends and supporters for an intense round-the-clock security detail.

“We will leave no stone unturned,” said Rabbi Tennenhaus, who acknowledges that vigilance is not a luxury in today’s volatile climate, but a necessity”!

Congregation Levi Yitzchok-Lubavitch and Chabad of South Broward merited a special endearment from the Rebbe. The Rebbe had warm interaction with Rabbi Tennenhaus and his Chabad Center on 25 Adar 1, 26 Adar 1, and 27 Adar 1, 5752-1992, the day the Rebbe suffered the first of two strokes. On this day, the last letter the Rebbe ever signed was to the 11th Annual Dinner of the Hallandale Chabad Congregation.

The 18-day Campaign to raise 180K for Security of Chabad of South Broward Headquarters, and its many schools, etc on Campus, concludes on Gimmel Tammuz, Monday, June 15, the Rebbe’s 27th Yahrzeit.

To generously help their EMERGENCY SECURITY CAMPAIGN, please donate on this here or via PayPal: [email protected], or by CashApp: $chabadsouthbroward.