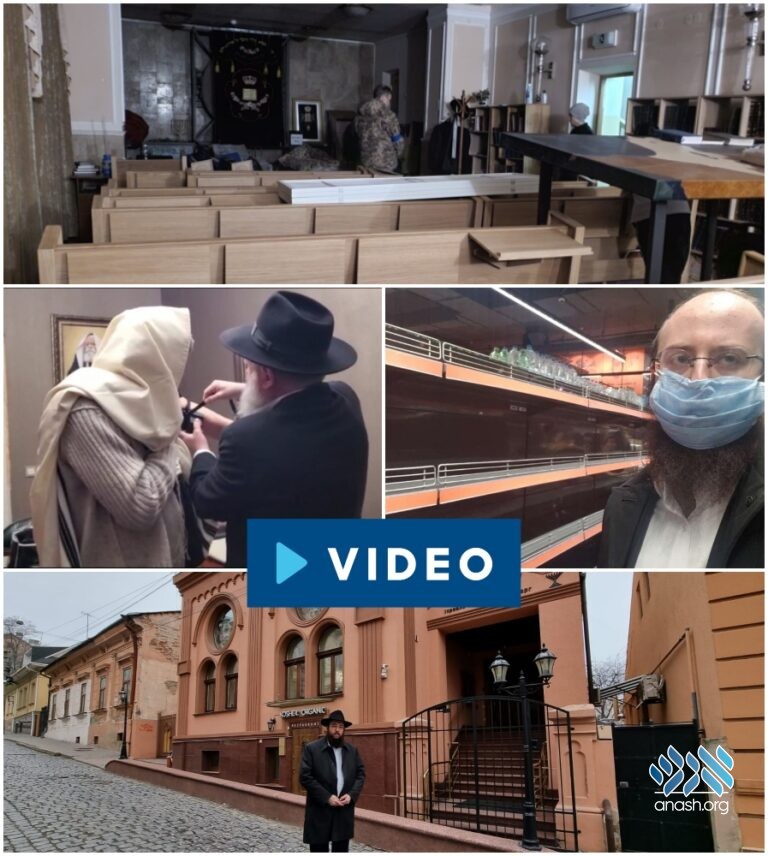 A number of shluchim from Ukraine who had already evacuated safely to other countries, returned to Lviv, Odessa, and even Kyiv to help those who still remained and to celebrate Purim with them.

Nothing can stop them.

A number of shluchim who had faithfully served in Ukraine, and had recently evacuated to safer countries, returned to Ukraine before Purim.

The shluchim returned to Lviv, Odessa, Chernivtsi, and even to the capital city Kyiv to help their community members who had remained behind, as well as to celebrate Purim together with them.

First to return was Rabbi Avrohom Wolff of Odessa, who headed back to the port city nearly a week ago, where he was greeted by delighted community members. As Purim came closer, more and more shluchim started returning to their cities, showing genuine mesiras nefesh with no fanfare.

Another shliach to return was Rabbi Mendy Glitzenshtein, Shliach to Chernivtsi. The Glitzenshtein family evacuated a number of weeks ago, after first ensuring thousands of other could escape as well. Pictures of his daughters kissing the mezuza on their way out of their home went viral, and were seen as photos that expressed the uncertainty brought about by the war, as well as the sacrifices of the shluchim. This week, Rabbi Glitzenshtein kissed the mezuza again, but on his way back in.

In Lviv, a city near the border in Western Ukraine, Rabbi Mendel Gottlib helped tens of thousands of refugees as they passed through en route to safety before evacuating himself. Before Purim, he headed back to the city, the largest city in Western Ukraine and the sixth-largest city in Ukraine overall. Upon his arrival, he took a photo in a local supermarket, showing bare shelves. “Judge for yourselves,” he wrote.

Later, however, Rabbi Gottlib posted a video of new pots, pans and utensils that had arrived for the Purim meal, as well as food deliveries. Lviv will celebrate Purim once again.

Even in war-torn Kyiv, where non-stop shelling has destroyed large parts of the city, and the number of civilian deaths climb by the day, Purim celebrations are underway. Shliach and Chief Rabbi Yonasan Markowitz returned just before Purim, traveling through dangerous roads, checkpoints and streets lined with anti-tank defenses.

“I could not leave the remaining Jews alone. The ones who did not yet escape include Holocaust survivors, those who are ill, and those who did not have the means to leave,” Rabbi Markowitz said.

“I know that it is difficult and dangerous, but I had to do it because there is no one else who will,” he said. “I came to Kyiv to bring some joy to the remaining Jews. Both Purim joy, with mishloach manos, matanos l’evyonim, megillah and the seudah, as well as simply to make them happy: to bring food and medicine for them, and to remind them that Hashem is watching over us. “