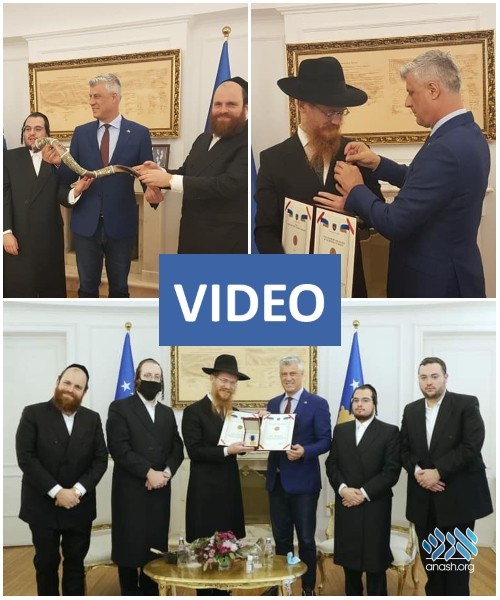 Rabbi Yoel Kaplan, Shliach and Chief Rabbi of Albania and Kosovo, was awarded an honorary ambassadorship by Kosovo’s President Hashim Thaçi. The surprise award will greatly benefit the Jews of Kosovo, the rabbi says.

The delegation was led by Shliach and Chief Rabbi of Albania and Kosovo Rabbi Yoel Kaplan, who was involved in negotiating the mutual recognition agreement between Israel and Kosovo announced last month by President Donald Trump.

The trade delegation later visited President of Kosovo Hashim Thaçi who surprised Rabbi Kaplan in awarding him Kosovo’s highest civilian honor, an honorary ambassadorship, in recognition of his work on behalf of Kosovo.

“Ambassador of honor of Kosovo is a real privilege and also a stronger commitment to do much more for Kosovo. Thank you Dear President Hashim Thaci for this biggest honor,” Rabbi Kaplan remarked.

After Shabbos, the delegation was received by the Imam, who together with Rabbi Kaplan worked extensively for peace and mutual recognition between the two nations. The event was covered extensively in the local press.