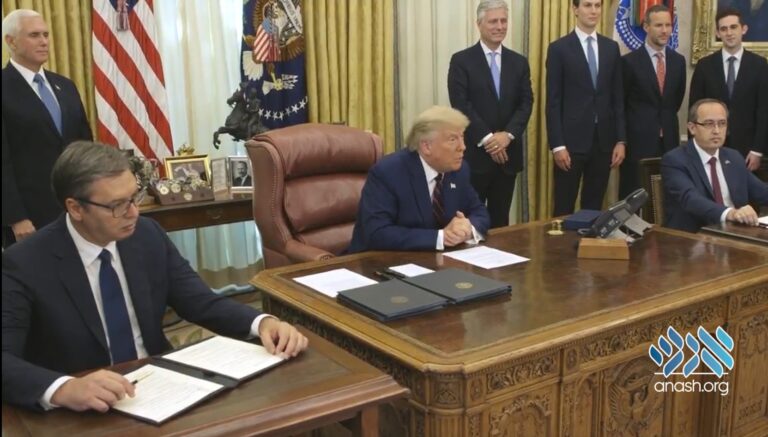 Just days after the Trump administration brokered a deal between Israel and the UAE, the White House announced that Kosovo will officially recognize Israel, and Serbia will move its embassy to Yerushalayim.

During a White House summit on Friday morning, the Balkan nations of Serbia and Kosovo agreed to normalized economic ties between the two countries as part of U.S.-brokered negotiations that also include Serbia moving its Israeli embassy to Yerushalayim and Kosovo recognizing Israel.

Kosovo, a predominantly Muslim country, has never before recognized Israel nor has Israel recognized Kosovo.

“Truly, it is historic,” Trump said, standing alongside the two leaders in the Oval Office. “I look forward to going to both countries in the not too distant future.”

This comes just days after the Trump administration brokered a deal for Israel and the United Arab Emirates to normalize relations. That was followed by the first commercial flight between Israel and the UAE, with neighboring Saudi Arabia and Bahrain to allow such flights to pass through their airspace.

Kosovo’s Parliament declared independence from Serbia in 2008. Most Western nations have recognized Kosovo’s independence, but Serbia and its allies Russia and China have not. The ongoing deadlock has kept tensions simmering and prevented the full stabilization of the Balkan region after the bloody wars in the 1990s.