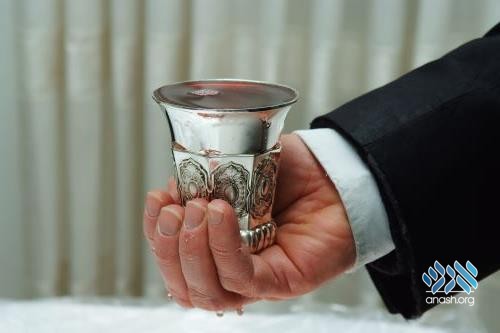 May the wine be drunk when our Shabbos afternoon sheva brachos concluded after dark?

Chazal prohibit eating or drinking anything besides water on motzei Shabbos before havdala, and Chabad custom is to refrain even from water. If you washed for bread earlier and are in the middle of a meal, you may continue eating until you either bentch or daven Maariv.

According to the Shulchan Aruch, the cup of wine left over from bentching shouldn’t be used to make havdala as we do not bundle mitzvos together and each one deserves its own cup. Only when there is no other wine available may it be used for havdala, which should be made right after bentching. The custom, however, is to use the same cup for havdala after maariv.

One of the sheva brachos is hagafen on the wine. Should it be left out in this situation?

The halacha—regarding both bentching and sheva brachos—is that the one who recited hagafen need not be the one to drink the wine. Therefore, the ideal option is to have someone who didn’t bentch, or one who already heard havdala, drink from the cup. Alternatively, the wine can be given to a child—preferably, but not necessarily, over the age of chinuch—to drink.

If bentching concludes while it is still bein hashmashos, the one who bentched may drink the wine before havdala.