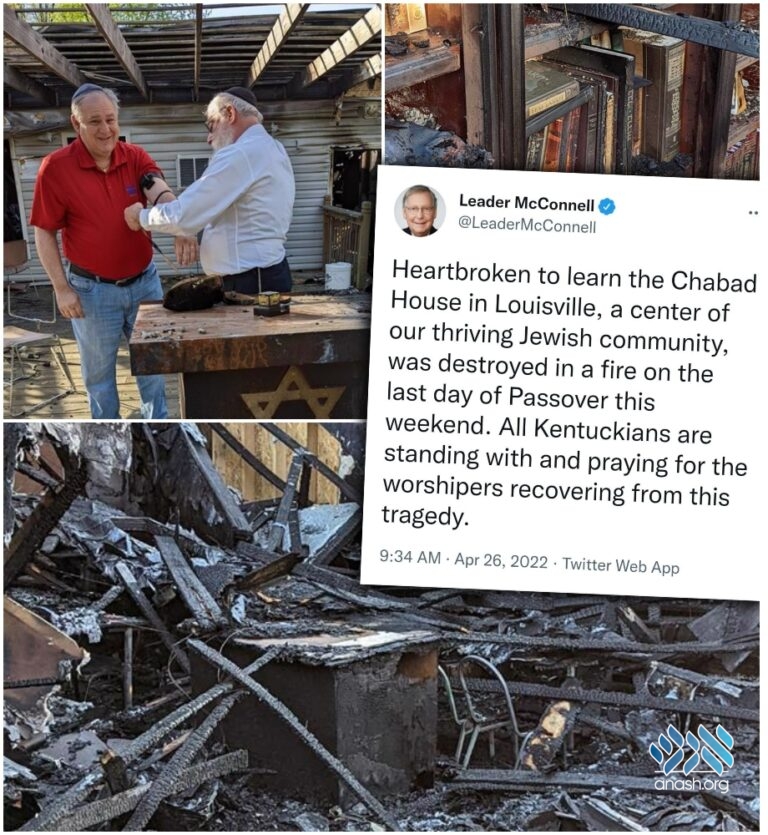 Senate Minority Leader Mitch McConnell said that he was “heartbroken” to hear of the fire that devastated Chabad of Kentucky’s Headquarters. Insurance said they would not cover the loss.

A fire that destroyed Chabad of Kentucky’s headquarters got attention from a high-profile local politician: Senate Minority Leader Mitch McConnell.

McConnel, the senior United States Senator from Kentucky, served as Senate majority leader from 2015 to 2021, and as minority leader from 2007 to 2015, and again since 2021. Listed twice as “one of the 100 most influential people in the world”, McConnell is one of the leaders of the current Republican party.

On Tuesday, he tweeted that he was “heartbroken to learn the Chabad House in Louisville, a center of our thriving Jewish community, was destroyed in a fire on the last day of Passover this weekend.”

He said that all Kentuckians are standing with and praying for the worshipers recovering from the tragedy.

The fire, which completely destroyed the Chabad House, broke out on Shabbos, Acharon Shel Pesach, hours after a grease fire earlier that day in a building next door to the center was extinguished by the local fire department.

Police quickly ruled out arson, instead saying that the second fire was a reignition or secondary fire from the earlier blaze. But along with the good news that it was not a deliberate act, came a blow to the shluchim – the insurance company said they would not cover the loss of the structure.

Because the Chabad House was built on leased land, the insurance will not cover the loss of the structure, Rabbi Avrohom Litvin, Head Shliach to Kentucky, told a local news station.

Chabad was scheduled to purchase the property on June 8, after which time the insurance would have covered the structure, he said.

“This entire building cost us $100,000 to build about ten or so years ago,” Rabbi Litvin said. “That money is gone and rebuilding’s going to be a challenge.”

Despite the challenge, Litvin pledged to rebuild “bigger and better than ever.”

“G-d’s the captain of this world and things are going to be OK,” Litvin said on Monday, standing by the charred remains of the Chabad House. “We just don’t see how at this moment, but we know it’s going to work out.”

Chabad of Kentucky’s programs will continue even as they make plans to assess and create a new home. To donate, visit Chabadky.com/donate.