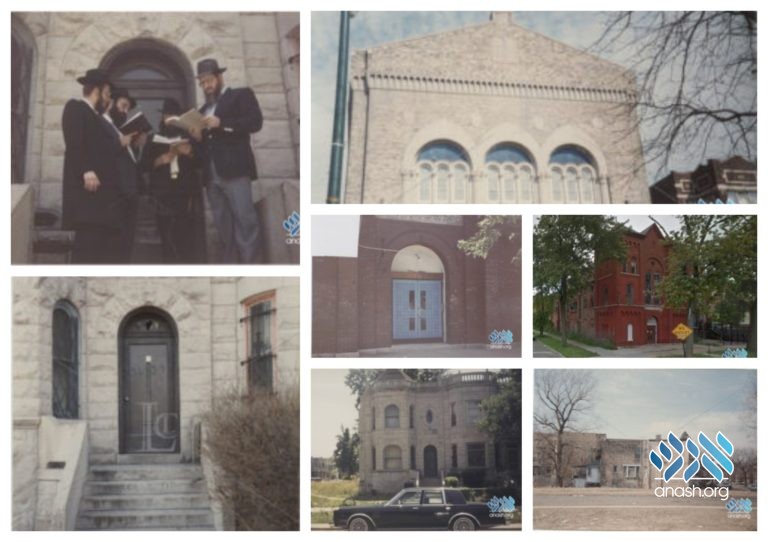 In honor of the upcoming Chag HaGeula of 12-13 Tammuz, I would like to share some historical pictures, never before published, that show us a few details about the Frierdiker Rebbe’s visit to Chicago. (Note: it is unclear if this the visit in 5690/1930 or the visit in 5702/1942.)

Sometime in the early ’80s, I and a group of Chassidim (Rabbi Shmulik Liphsitz, Rabbi Yitzchok Wolf and Rabbi Boruch Gurewitz), researched the address of where the Firerdiker Rebbe נ”ע, stayed during one of his visits to Chicago. We have now confirmed this through checking the pictures in the Chabad Library Archive (here), that it was in fact the house.

We went there to say Tehillim. The owner at that time graciously allowed us into the house for a short visit, and gave us permission to daven on the porch and entrance way. The visit and the saying of Tehillim was, to say the least, very emotional. We all know that a place that spends time is holy and that kedusha is eternal. Subsequently, we sent in a Duch (report) along with the pictures to the Rebbe, זי”ע, and we received an immediate reply: ת”ח. = (t’shuos chein.)

We then went to an empty lot where the original Bnei Reuven Shul stood on the West Side of Chicago. The reason why it’s currently an empty lot is that, to the credit of Congregation Bnei Reuven, they refused to sell the Shul to a non-Jewish house of worship as many others did. In the early 60’s, Congregation Bnei Reuven, under the leadership of Rav Herschel Schusterman ע”ה, relocated to West Rodgers Park and is now a booming, dynamic Shul serving the Anash community, led by HaRav Boruch Hertz שליט”א.

It’s interesting to note, that many of the Frierdiker Rebbe’s supporters lived in Chicago, like the very famous Reb Yankel Katz, as well as Reb Avrohom Shayevitz who I personally remember Davening in Bnei Reuven in the 80’s, with him being well into his 90’s.

While on the subject of Chicago and shuls; Rav Shlomo Zalmen Hecht, ע”ה (son-in-law of Reb Yisroel Jacobson,) served as the Rov of Chicago’s “Warsaw Bikur Cholim Shul.” The Shul now is the Agudas Yisroel Shul and Agudah headquarters of Chicago.

We then went to the Tzemach Tzedek Shul (which is no longer in use as a Shul), which stands today at 1459 N. Talman Avenue in Chicago. Unfortunately, we could not enter that building.

[Ed. note: There was talk about the Frierdiker Rebbe actually stetting in Chicago, instead of New York.]

In general; along the Lake Michigan lakeshore, including Chicago and Wisconsin, lived numerous Lubavitcher Chassidim who fled Russia from the pogroms and settled there. The Frierdiker Rebbe נ”ע also visited Sheboygan, Wisconsin, 60 miles North of Milwaukee, during his 5689-1929 visit.

I had the opportunity to see the Shul where the Frierdiker Rebbe Farbrenged. in Sheboygan. It seems there was a large contingent of Chabad Chassidim there, which is why the Frierdiker Rebbe visited. Over the years I’ve met numerous Frum people whose ancestors lived there.

Unfortunately, I don’t have a photo of that Shul.