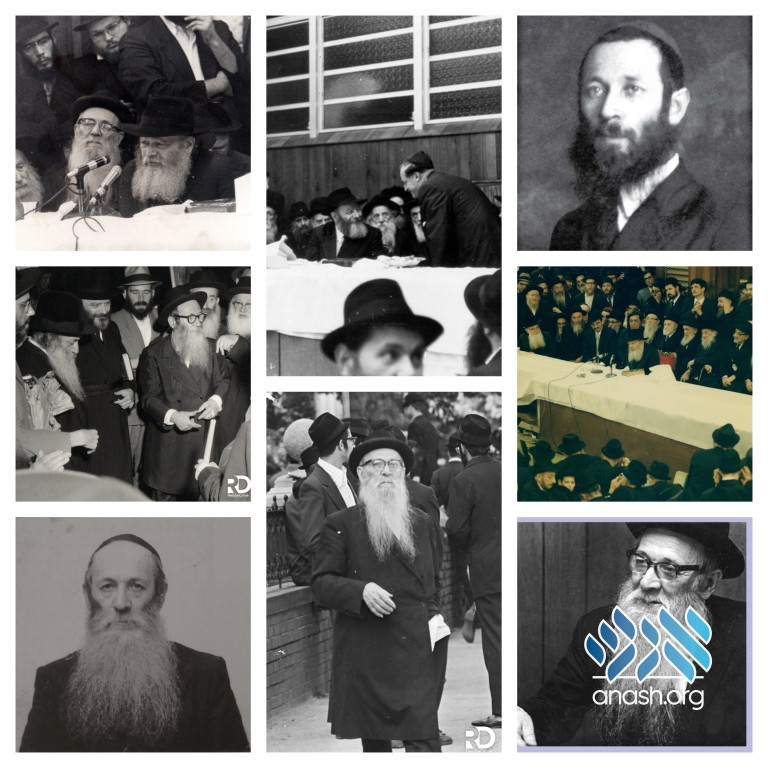 17 Sivan is the yahrtzeit of Rabbi Yisroel Jacobson.

Born in Zuravitz 5656/1895, Yisroel (born Paretzkin) was ten years old when he arrived in Lubavitch. There were no melamdim in his town and a local man convinced his father to send him to the yeshiva of Rabbi Reines in Lida.

It was seemingly “by chance” that he ended up in Lubavitch. While on the way to Lida, he and his father met an elderly misnaged who asked them where they were going. “I’m a misnaged, but if you want your son to remain an erlicher yid send him to Lubavitch,” the elderly yid said. He spent the next decade learning in Tomchei Tmimim, first in cheder and then in yeshiva.

In 5680/1920 he married Shaina Levin, the daughter of Reb Yehoshua Heschel. Her sister had married the chossid Reb Aron Lazer Zeitin, who was murdered by the KGB. The Jacobsons spent the first five years after their wedding in Homel.

In 5685/1925, Reb Yisroel and his family left Russia, having been chosen by anash as their representative to move to America and help obtain papers for other chassidim to follow. Before leaving, he met with fellow chassidim and agreed that he would do everything possible to assist those who were staying behind.

Upon arriving in New York, he became the rav of Anshei Babruisk, a nusach Ari shul in Brownsville, Brooklyn. He immediately began working among the yidden there, and sending money to Russia.

In 5687/1927, Rabbi Jacobson was instrumental in getting high-ranking politicians to put pressure on Soviet officials to release the Frierdiker Rebbe from prison. Ultimately, he succeeded and the Frierdiker Rebbe was able to leave the Soviet Union and travel to Riga, Latvia.

As Sukkos approached, Rabbi Jacobson realized that he could not get Yanover esrogim, a basic staple for any Lubavitcher chossid for the yom tov. Unable to imagine using anything but a Yanover esrog, he made arrangements to have them sent to him from Europe.

In 5715/1955, he started traveling to Italy himself to oversee the cutting and export of the esrogim. The business was inherited by his son-in-law Rabbi Mottel Altein, and today is run by his grandson Rabbi Leibel Altein of Crown Heights.

From the mid-1920s until the Frierdiker Rebbe’s arrival in America in 5700/1940, Rabbi Jacobson was the contact point for all things Lubavitch in the country. All inyonei Chabad went through him, from Agudas Chabad, to shiurei Chassidus for various groups, to collecting ma’amad for the Rebbe.

One of his main peulos with American youth was teaching chassidus and farbrenging with bochurim in other yeshivos, such as Torah Vodaas and Chaim Berlin. The bochurim were very taken by his sincerity and drank his words with great thirst. At the time, there was not yet a Tomchei Tmimim in the US. He would tell them about the Rebbe and the great merit of being connected to him.

Many of those talmidim traveled to Poland to study in Tomchei Tmimim in Otwock, and went on to become great Chassidim, rabbanim, mashpiim, and shluchim. Among these students were Rabbi Shlomo Zalman Hecht, a”h, and yblcht“a Rabbi Mottel Altein, who later married his daughters. Rabbi Avrohom Hecht, Rabbi Avrohom Barnetzky, and Rabbi Berel Levy were also his talmidim and traveled to Otwock at his advice.

Rabbi Jacobson used his connections with the government to secure visas for the Frierdiker Rebbe and his family, including the Rebbe and Rebbetzin Chaya Mushka. He also procured visas for Reb Mendel and Rebbetzin Sheindel Horenstein, but unfortunately they could not use them.

Tragically, some of the great Chassidim for whom he procured visas, such as Reb Itche der Masmid, Reb Chatshe Feigin and Reb Mordche Cheifetz were unable to escape Nazi-occupied Latvia, and they perished there, HYD.

After the arrival of the Frierdiker Rebbe, the breadth of Rabbi Jacobson’s talent and the depth of his commitment truly stood out. One would be hard-pressed to find any activity that was associated with Lubavitch that he didn’t have a major hand in.

Soon after the founding of Tomchei Tmimim on American shores, in Adar Sheni of 5700/1940, Rabbi Jacobson was appointed mashpia, together with Reb Shmuel Levitin. Other tasks he was given included the founding of the Chevra Kadisha and Beis Rivkah Schools, establishing mikvaos and strengthening shmiras Shabbos.

His realm of work spanned across all demographics and levels of observance. He was the mashpia to young couples and to bochurim. He established ladies auxiliaries and Achos Temimim as a counterpart to the Achei Tmimim groups that were established for boys. And of course, he worked hard to spread yiddishkeit among those who were not yet affiliated.

After the histalkus of the Frierdiker Rebbe, Reb Yisroel was among those who immediately implored the Rebbe to accept the nesius. He did not rest, writing letters to chassidim and mashpi’im in other countries that may not have known the Rebbe, encouraging them to connect themselves to the Frierdiker Rebbe’s younger son-in-law, our Rebbe.

In 5718/1958 he was instrumental in the founding of the yeshiva in Newark NJ, which later relocated to Morristown. There, too, he served as mashpia.

In the 60s, soon after the founding of Yeshiva Hadar Hatorah, he was appointed Rosh Yeshiva and through this role succeeded in bringing hundreds closer to Yiddishkeit. Despite his no-nonsense approach, which would, perhaps, seem tough in today’s day and age, it was clear to each person that Rabbi Jacobson sincerely cared for his well-being.

Before joining the yeshiva, one needed to abide by his rules; there was no way around it. Decades later, his talmidim speak about him longingly. He was, for many of them, the father they wished they had.

In the last few weeks of his life, he became ill and was hospitalized. Reb Heishke Dubrawski shared an incredible observation about him from this time. Despite his age, and even after all that he had accomplished in well over 5 decades, he only saw what he still needed to accomplish, and found no time to rest.

His physical strength had left him, but in terms of his neshama, there was an abundance of energy and much to be done. He passed away at the age of 80 on the 17th of Sivan, 5735/1975. He left behind a beautiful family of chassidim, shluchim, and rabbonim who follow in the Rebbe’s ways.

His memoirs were published in “Di Yiddishe Heim” magazine in the 60s and 70s and were later published as the book Zikaron L’vnei Yisroel. They are a must-read for those interested in Chabad history, or for anyone who wishes to be inspired by a Chassid who worked tirelessly until his last breath.

Special thanks to Rabbi Michoel Seligsohn