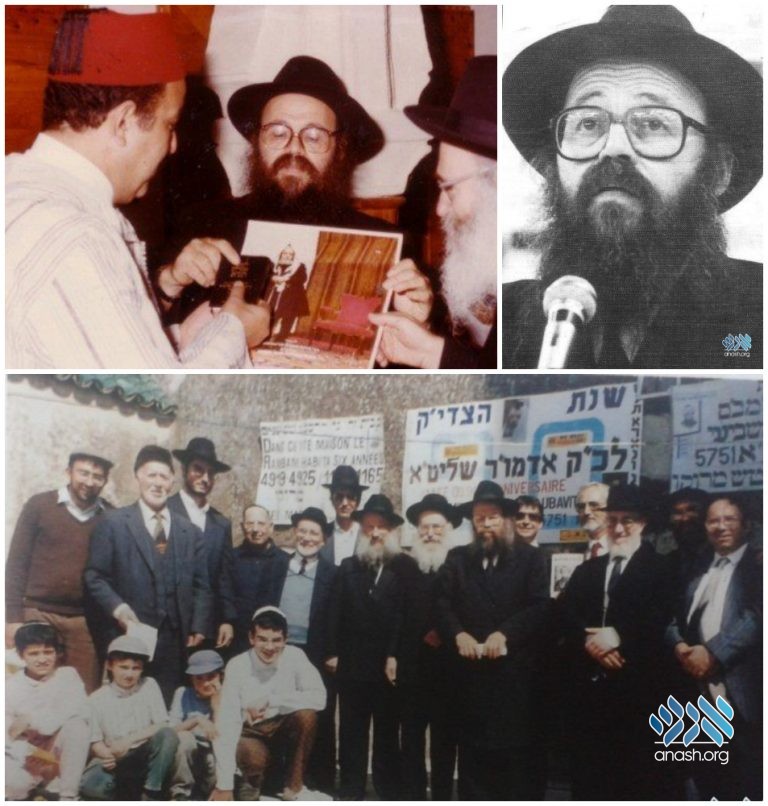 12 Iyar is the yahrtzeit of longtime shliach to Casablanca, Morocco Rabbi Leibel Raskin, who passed away after an illness in 5764/2004.

12 Iyar is the yahrtzeit of shliach to Morocco Rabbi Leibel Raskin, who passed away after an illness in 5764/2004.

This year will be sixty years since Reb Leibel and tblcht”a his Rebbetzin, Raizel Raskin, arrived in Casablanca. Mrs. Raskin is still very much active in her shlichus in Casablanca.

Last year, I spent time in Morocco as part of the 60th-anniversary festivities honoring Rabbi Sholom and tblcht”a Rebbetzin Gittel Eidelman. I saw with my own eyes the revolution and transformation brought about by the shluchim and their activities. A revolution that brought about mosdos and institutions that educated and cared for thousands of Jews over the decades, and in Rabbi Raskin’s case bringing about the “Uforatzto” revolution.

Shlichus in Morocco began in 5710/1950, with Reb Michoel Lipsker, Reb Shlomo Matusov, Reb Sholom Eidelman, and others. They had already been serving thousands by the time that first decade was over. Reb Nissen Pinson had served in Morocco for several years and then moved on to Tunis.

However, Rabbi Leibel Raskin’s arrival in Casablanca changed the character of shlichus there. If the first decade (5710-5720/1950-1960) of shlichus was all about starting educational and other institutions in conjunction with local rabbonim and community leaders, then the next decade was all about Uforatzto!

In the years prior, the Rebbe had begun to speak about activities outside the formal realm of the shul and the school. In Eretz Yisroel, activities began at kibbutzim and outlying settlements, reaching people that don’t come to shul or send their children to schools where they can be reached. In Morocco, the idea was to mimic those activities in Eretz Yisroel in ways that are appropriate for the situation in the ground.

Rabbi Raskin’s activities were in addition to his responsibility as menahel of the Beis Rivkah in Casablanca. Some of his innovations included having the Rebbe’s photo in every Jewish home, translating the Tanya into Arabic, the siyum HaRambam in the Rambam’s home, and more. All this was done with incessant energy and chassidishe bren.

In his years as an older bochur, Rabbi Raskin spent his days in 770 learning in yeshiva there and hearing the Rebbe’s call. He heard the sichos and farbrenegns and that lead him straight to shlichus and Casablanca. He was the first shliach in Morocco that had spent his formative years in 770 and brought that energy with him. His generally fiery personality was contagious and also helped light a fire among the local Jews. His arrival helped complement the Chabad empire that was being built in Morocco.

One of the challenges Rabbi Raskin faced was publicizing his activities both before and after. The situation in Morocco called for activities to be done quietly – without much fanfare, unlike in other countries. The authorities there were wary of the Islamists there and didn’t allow public outdoor events and didn’t allow “noise” for Jewish events. Such difficulties posed all kinds of questions for Rabbi Raskin and his fellow shluchim there. In urgent situations they would ask the Rebbe and receive answers.

They realized that such events need to take place indoors only and that publicizing the events can only happen internally, within the Jewish community.

Rabbi Raskin received guidance and direction from the Rebbe. He shared some of them over the years:

“At the end of 5721/1961, I traveled to New York, the first time since arriving to Morocco. During my first yechidus I asked the Rebbe that since I’m still new there I’d like to know how I can reach the hearts and minds of the yidden there? The Rebbe’s response was the following:

1) You need to tell the yidden there that you haven’t come to bring new ideas to them. Sefardic Jews have for centuries had the concept of Kabbalah and Zohar, you’ve only come to strengthen what already exists among them, and mainly to inject a little chayus. ”

2) You need to share with them sippurei tzaddikim and Chassidim; this will help bring them closer.

Rabbi Raskin continues: “During the Six-Day War anti-Jewish sentiment was high, and thousands of Jews left Morocco. One member of the shluchim family sent a letter to the Rebbe asking that in light of the correct situation maybe the shluchim should leave – for their own safety. The Rebbe’s answer was short: “di shluchim vet nit shatten = It will not hurt the shluchim.” All Jews there are shluchim of the shluchim, Rabbi Raskin added. “A shliach must know that he is the baalebos of his city and country.”

“It happened to me that I was once walking on the deserted streets late at night and all of a sudden a group of goyim pulled out knives and began to chase me. I ran, and began to yell: Rebbe, helf mir! As you can see, the Rebbe helped me, b’chasdei Hashem.”

“At the end of Tishrei, 5745/1984, my son Mendel, now a shliach in Cote S. Luc, Montreal, got engaged and I remained in New York to arrange some things and be present for the vort. My Rebbetzin traveled back home and was very unpleasantly greeted by a note stuck to our door. It said: Raskin, don’t come back home, otherwise we’ll have to kill you, r”l. For good measure, they smeared some blood on the note.”

“I wrote into the Rebbe, recounting what my wife had told me over the phone, and added that it’s shum davar, nothing at all, and I was just informing the Rebbe, and that we had no intention of leaving our shlichus, c”v. Within half an hour I received an answer from the Rebbe where the Rebbe underlined shum davar and added that it would be worthwhile to info the Jewish community leaders. The details of what followed are not important, but the important thing is that we did not panic and remained steadfast in the Rebbe’s shlichus.”

“I’ll share one more memory that is a lesson to anybody: Hoshana Rabbah 5752 was on Sunday and the Rebbe distributed dollars and lekach. When I passed the Rebbe Rabbi Leibel Groner told me that he had something for me from the Rebbe and that I should come into mazkirus later today. When I went into mazkirus I was told that the Rebbe had said since the shlichus had been operating in Morocco for over 40 years, after which time Hashem gives “a heart to know, eyes to see and ears to hear,” that I need to grasp the responsibility that comes after 40 years and act upon it.”

“I asked Rabbi Groner what the Rebbe means to which he responded: These are the Rebbe’s exact words,” and that I need to figure that out for myself. This was five months before chof-zayin Adar. This told me that the Rebbe gives the koach and that we need to do our utmost and fulfill the Rebbe’s teachings,” Rabbi Raskin concluded.

May these short paragraphs be in the memory of three of the Rebbe’s shluchim, who for decades brought about the revolution that Lubavitch made in Morocco: Reb Shlomo Matusov, Reb Sholom Eidelman and Reb Leibel Raskin. – Yehi Zichrom Baruch.