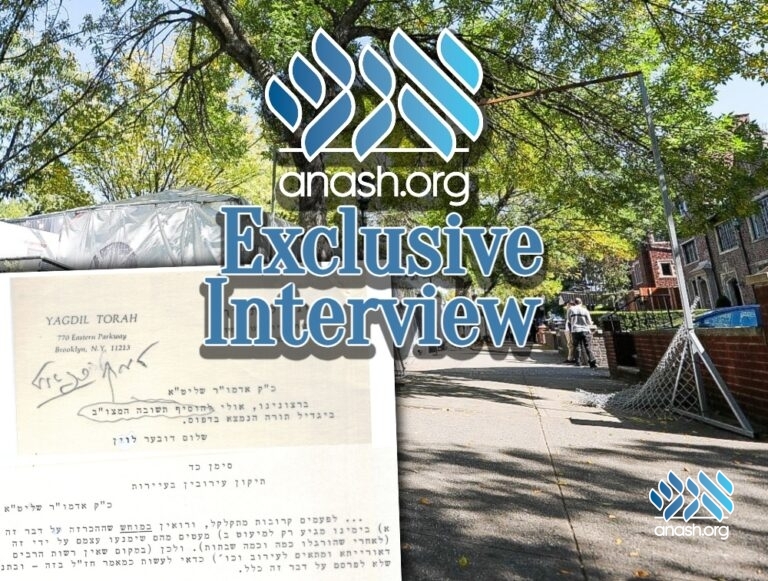 Following the release of the landmark response from the Rebbe against eruvin in large cities, Anash.org sat down with Rabbi Shalom Ber Levine to get a full picture of the Rebbe’s position.

Following the release of the landmark response from the Rebbe against eruvin in large cities, Anash.org sat down with Rabbi Shalom Ber Levine to get a full picture of the Rebbe’s position.

Rabbi Levine is a renowned talmid chochom and an author of countless seforim on halacha and history, notably among them the new edition of the Alter Rebbe’s Shulchan Aruch. He also stands at the head of the Rebbe’s library.

Between the years 5736 and 5746, Rabbi Levine published, at the Rebbe’s instructions, a high-level Torah journal called Yagdil Torah which contained halachic writings by the Rebbeim and leading chassidim. The Rebbe’s response about the eruv was prepared for that journal.

Anash.org: Where did this new maineh come from? And what made you decide to release it now?

Rabbi Levine: I have a large file with all the handwritten responses that I received from the Rebbe over my years of work at the library. I recently opened the file and b’hashgacha protis I came across that maineh after not having seen it in years.

The text that was published is the complete response that the Rebbe had written. While we don’t know the context of who it was written to, the Rebbe acknowledged and confirmed the authenticity of the maineh.

Anash.org: Why was the Rebbe so opposed to an eruv in a metropolis?

Rabbi Levine: In this maineh, the Rebbe spells out the single biggest impediment to building an eruv in a metropolis: reshus horabim midoraisa.

The eruv that we are familiar with using posts and wires is kosher for smaller areas. However, it doesn’t work for a reshus horabim, which needs proper walls and doors that can close.

Rabbi Levine: A reshus horabim means a public area used by 600,000 (or according to some any street that is 24 feet wide).

While some want to argue that 600,000 people must walk on that street every day (which would come out to 15 people per second!), it’s clear from the Alter Rebbe in several places that it’s only necessary for the 600,000 to live in the city and access the streets.

What’s unique about this specific maineh is that the Rebbe spells out clearly lmaiseh that a reshus horabim is a common issue that must be looked out for. The Rebbe says that in such a case one cannot even build a hidden eruv!

Anash.org: Why then was the Rebbe concerned to eruv in smaller cities where there aren’t 600,000?

Rabbi Levine: In this maineh the Rebbe clarifies that as well. The Rebbe says that it is common for the eruv to break, and if people continue to carry, they will be carrying on Shabbos without an eruv.

Although it’s possible to create a system to notify people, the Rebbe says that not everyone will find out, and even those who do will continue to carry out of habit. They are so used to carrying on Shabbos that they won’t take the announcement to heart.

There are other halachic concerns that apply even to small-town eruvin (such as sechiras reshus from a public official according to the Alter Rebbe and other issues), but the Rebbe doesn’t mention them.

Some might argue that today it’s less common for the eruv to break and we have better systems for notification, however, this is irrelevant in large cities which have 600,000, which as mentioned cannot possibly have a string eruv according to the Alter Rebbe and other poskim.

Anash.org: In the Rebbe’s response to you, he rejected the idea of printing it in the Kovetz Yagdil Torah. Do you have any ideas why that might be?

Rabbi Levine: There are several possibilities.

At that time, in the early 5740s, there were heated debates in the frum world over building an eruv in Borough Park (and that might have been my thought to include it). Yet, as we see from other instances, the Rebbe did not want to get involved in the controversy (since there are poskim who don’t follow the Alter Rebbe and are lenient).

It could also be that the Yagdil Torah journal was not the right place for it (just as the Rebbe rejected other pieces which he decided weren’t suited for this particular journal).

Anash.org: Thank you Rabbi Levine for the clarity, and may we continue to implement the Rebbe’s guidance for us!