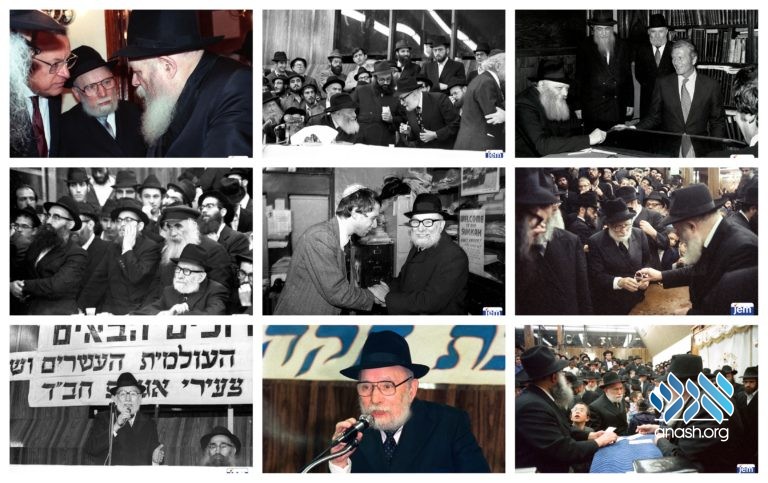 Reb Yosef Halevi Wineberg, whose 7th yahrtzeit is on 7 Tammuz, among his many other accomplishments, was for decades the voice of Lubavitch, as far as many thousands of non-Lubavitchers were concerned. When you turned on the radio on Motzoei Shabbos and listened to his shiur Tanya and then to a “teil fuhn ah sicha k’doysho fun Libavitcher Rebben, zol gezunt zein,” you knew you were in a good and safe place. That for the next thirty minutes you’d get away from the nitty-gritty of the week awaiting you and have some oylem haBoh on this world.

Rabbi Wineberg would give the Rebbe the notes before presenting the shiur and the Rebbe would review them, make he’oros and/or corrections and return them. These shiurim were ultimately turned into the שיעורים בספר התניא in Yiddish and Hebrew, and Lessons in Tanya. Some years ago a discovery was made. A street vendor was selling old records, among them were the recordings of the first Tanya shiurim on the radio, on station WEVD, “The station that speaks your language,” back in 5723/1963. We bring you two of these rare and precious recordings, along with another recording from the beginning of Sefer HaTanya, in 5742/1982. (See below.)

Born in Poland in 5678/1917, Rabbi Wineberg was a talmid of the Yeshiva Tomchei Tmimim in Otwock. During WW2 he spent the yomim nora’im of 5700/1939 with the Frierdiker Rebbe while the bombs were falling in Warsaw, taking cover from the bombs while trying to protect the Rebbe himself and his precious manuscripts. Once the Frierdiker Rebbe escaped to Riga, Rabbi Wineberg was one of the talmidim in Otwock who escaped to Vilna and then Kobe, Japan, and Shanghai, China by way of one of the precious visas issued by Chiune Sugihara. He was also one of the nine bochurim who were issued visas to come to Canada in 5702/1941. These boys were the building blocks on which the Montreal mosdos stand to this day. Later he married and moved to New York.

Over the years he worked as a Shadar (a shlucha d’rabbonon) for the Yeshiva Tomchei Tmimim, having been appointed to the position by the Frierdiker Rebbe. While traveling to faraway countries for the yeshiva he also merited to do many shlichusen of the Rebbe, often seeing open mofsim for the Rebbe while on those trips. Rabbi Wineberg also was the baal tefilloh for selichos and yomim nora’im by the Rebbe’s minyan in 770.