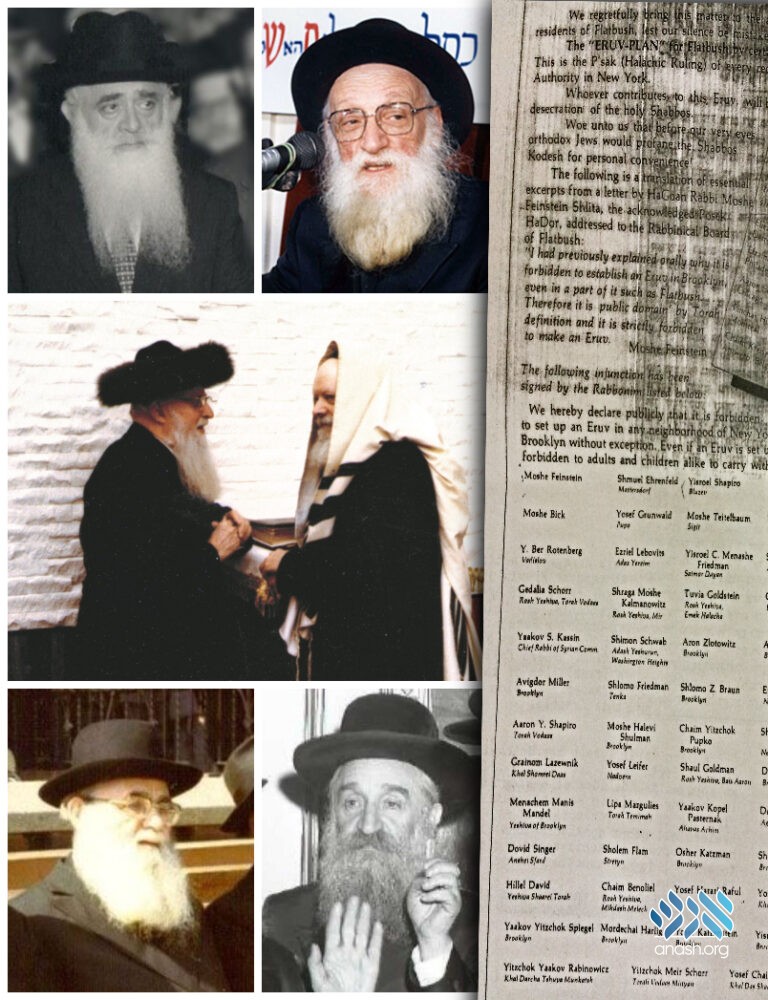 Following the publicity of the longtime Lubavitch stance regarding eruvin in large cities, one reader shared a more comprehensive list including signatures by other prominent Lubavitcher Rabbonim against constructing or using an eruv in Brooklyn.

The notice, which appeared at the time in the Jewish Press, is signed by 73 leading Rabbonim, including famous names such as Harav Moshe Feinstein, Harav Simcha Elberg, and the Rebbes of Bobov, Satmar and Pupa.

In their public letter, they state their unequivocal opposition to create or use an eruv in Brooklyn: “We hereby declare publicly that it is forbidden to set up an Eruv in any neighborhood of New York or Brooklyn without exception. Even if an Eruv is set up, it will be forbidden for adults and children alike to carry within it.”

Of special interest to Lubavitch readers are the signatures of prominent Lubavitcher Rabbonim. Aside from Harav Zalman Shimon Dworkin, Harav Pinchas Hirshprung, and Harav Meir Greenberg, whose names appeared on the previous notice, the new letter includes other acting Rabbonim at the time:

Harav Shlomo Aron Kazarnovsky – Rov and famous chossid of three Rebbeim, member of the boards of Merkos, Machene, and Aguch, and a Rov in Bensonhurst.

Also, interesting to point out, the names of other Rabbonim who signed, who although were not Lubavitcher Rabbonim per se, shared a close kesher with the Rebbe:

Harav Mordechai Harlig – the father of Mashbak Reb Meir Harlig, Harav Mordechai was close to the Frierdiker Rebbe and the Rebbe, and merited special kiruvim from the Rebbe. He served as a rov in the Bronx, until his final years when he lived in Crown Heights.

Harav Efraim Eliezer Yolles – Rov and Chief Rabbi of Philadelphia and head of the Agudas Horabbonim, Harav Yolles was a fervent follower of the Rebbe and merited a very special connection with the Rebbe.

Harav Chaim Tzvi Kreiger – a phenomenal rov and posek who lived in Crown Heights for many years where he answered shailos and gave semicha. He had a close connection and correspondence with the Rebbe, who even apologized for not being able to attend his son’s bar mitzvah.

The following is the full text of the notice:

We regretfully bring this matter to the attention of all G-d Fearing Jewish residents of Flatbush, lest our silence be mistaken for acquiescence.

The “ERUV-PLAN” for Flatbush by certain rabbis and laymen is invalid. This is the p’sak (Halachic Ruling) of every recognized responsible Rabbinical Authority in New York.

Whoever contributes to this Eruv will be contributing to the public desecration of the holy Shabbos.

Woe unto us that before our very eyes orthodox Jews would profane the Shabbos Kodesh for personal convenience!

The following is a translation of essential excerpts from a letter by HaGaon Rabbi Moshe Feinstein Shlita, the acknowledged Posek HaDor, addressed to the Rabbinical Board of Flatbush:

“I had previously explained orally why it is forbidden to establish an Eruv in Brooklyn, even in a part of it such as Flatbush. Therefore it is public domain by Torah definition and it is strictly forbidden to make an Eruv.”

The following injunction has been signed by the Rabbonim listed below:

We hereby declare publicly that it is forbidden to set up an Eruv in any neighborhood of New York or Brooklyn without exception. Even if an Eruv is set up, it will be forbidden to adults and children alike to carry within it.

The following out of town Rabbonim of the Union of Orthodox Rabbis of America have also signed an injunction prohibiting the establishment of Eruvin New York and all other cities throughout the United States (where similar halachic conditions exist):