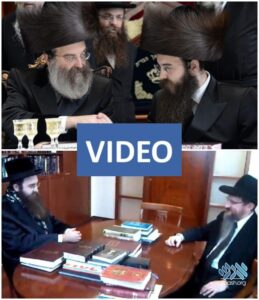 Following the passing of the Sadigura Rebbe last week, three of his sons were appointed as his successors. His son Harav Mordechai Sholom Yosef, named as the ‘Sadigur Yerushalayim’ Rebbe, has a close relationship with shluchim around the world.

The court of Sadigur has announced the successors of the Sadigerrer Rebbe, who passed away last week.

Harav Yisroel Moshe Friedman, the Sadigerrer Rebbe, passed away Monday, 21 Av in his home in Eretz Yisroel. He was a direct descendant of the Heiliger Ruzhiner. Like his father before him, he was a member of the Moetzes Gedolei HaTorah of Agudas Yisroel. He was known as a friend of Lubavitch and the work of shluchim.

In a will left to his family and his chassidim, the Sadigerrer Rebbe instructed that his fifth son, Harav Yitzchak Yehoshua Heschel to be the next Rebbe, and lead all Sadigur institutions around the world.

However, after consulting with the Rebbetzin, wife of the niftar, and with rabbonim of the chassidus, all the sons and sons-in-law of the Sadigerrer Rebbe agreed that three of the sons will become Rebbe. Harav Mordechai Sholom Yosef, the eldest son, is to become ‘Sadigur Yerushalayim’ Rebbe, his third son, Harav Aharon Dov Ber is to become ‘Sadigur London’ Rebbe and his fifth son, Harav Yitzchak Yehoshua Heschel, will be named as his father’s successor in Bnei Brak.

Shluchim and Chabad activists around the world say that the eldest son, the ‘Sadigur Yerushalayim’ Rebbe, has had a decades-long relationship with Chabad, and has expressed his support for shluchim and mosdos.

“In 5771, the to-be rebbe visited Moscow, on a mission from his father a”h,” recalled Rabbi Shiya Deitch, one of the shluchim in Moscow. “He came to visit the Chabad center, where he met Chief Rabbi Berel Lazar and they had a warm conversation.”

Other Chabad chassidim recalled the warm relationship between Chabad and Sadigur extending back numerous generations, and expressed their warm wishes at the appointment of the new rebbes, wishing them much success.