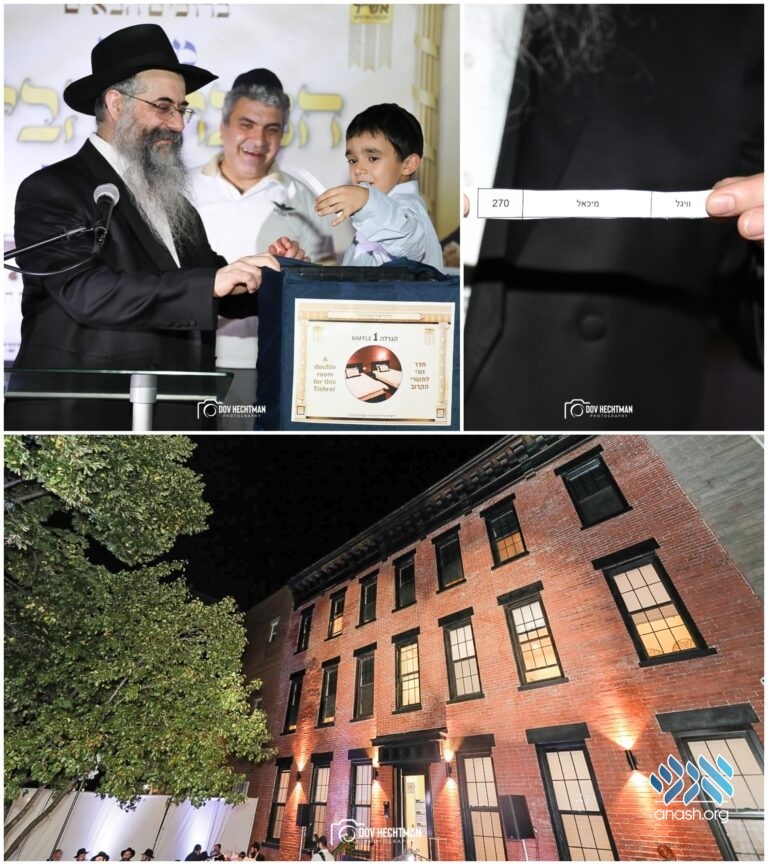 During the chanukas habayis for the new Eshel building that will serve as the second Crown Heights hotel, raffles were held for donors to the building campaign. Winners inside.

Last week, on Eastern Parkway, there was a Chanukas Ha’Bayis for the new Eshel building during which a raffle was held, as promised, among the donors to the new hotel.

Chayolei Tzivos Hashem, who were at the event, were called up, one by one, to the podium to take the winning name out of the raffle box.

First was the raffle for a room at the Eshel hotel for the upcoming month of Tishrei. The winner was Mrs. Tamar Pevsner from Crown Heights.

The next raffle, for donors who gave more than $180, was for a pair of tickets to the Rebbe for Tishrei. The winner was R’ Michoel Vaigel from Kfar Chabad, Israel.

The winner of one of the most desirable prizes, a suite for the entire month of Tishrei in the new Eshel building was R’ Shraga Crombie from Edison, NJ.

The raffles concluded with a special raffle – a dollar from the Rebbe for every family member. This was won by R’ Avi Ovadia from Petach Tiqva, Israel.

The hanhala of Eshel are exceedingly grateful to the more than 600 of Anash, men, women and children, who donated toward the new building.

They particularly want to give a special thank you to the Keren Meromim of philanthropist R’ Yitzchok Miralshvili, Chabad on Campus in Israel directed by Moshe Shilat, and the Badalov family.

“There is no greater gift to give to the Rebbe at the start of a Hakhel year than this building,” they say with satisfaction. “We anticipate this building becoming attached to 770 which will be attached to the Beis Ha’Mikdash in Yerushalayim, immediately.”