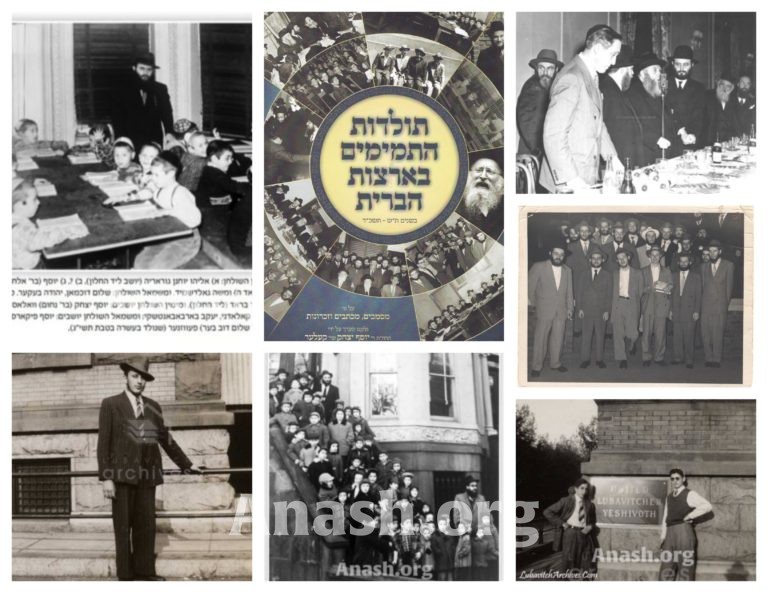 The book, part one of a series, shares the history of all the Lubavitcher Yeshivos in America from 5700/1940, when the Frierdiker Rebbe founded the first Tomchei Tmimim on these shores, until 5724/1964. It also mentions Achei Tmimim, the younger division, and includes the names of many students, class pictures, and much more.

In the book, Rabbi Keller occasionally goes back to pre-1940 to tell the stories of the trials and tribulations of some of the founding students of Tomchei Tmimim in America. He shares descriptions of their earlier, extracurricular studies with Rabbi Yisroel Jacobson, their travels to learn in the Yeshiva in Otwock, Poland, and ultimately, their harrowing trip to the US after the War broke out in 5699/1939.

The book contains many individual pictures, yomanim and personal accounts written by bochurim throughout the years. Many of these, such as a diary written by Rabbi Sholom Ber Schapiro of the events of the years 5717/1957 – 5723/1963, are being released for the first time.

The book covers another topic that is relevant today: the ups and downs experienced by the yeshivos in their early years. From monetary issues, to dwindling attendance, to bochurim seeking “college-friendly” yeshivos, the reader can see that many of the issues facing mosdos today are not only a recent phenomenon.

The book is the brainchild of Rabbi Sholom Ber Schapiro, who was appointed by the menahel Rabbi Yosef Tennenbaum to be assistant menahel in the mesivta on Ocean Parkway, and who served there for 40 years. Rabbi Tennenbaum gave Rabbi Schapiro the yeshiva archives for safekeeping, and he graciously shared them with the author, Rabbi Yossi Keller of Crown Heights.

Part of the material presented in the book is taken from the archive of Dr. Nissen Mindel, mazkir of the Rebbe and Frierdiker Rebbe, and father-in-law of Rabbi Schapiro. Rabbi Mindel amassed a large archive of yeshiva material over years of working for the yeshiva and with the Rashag, who was the menahel haPoel.