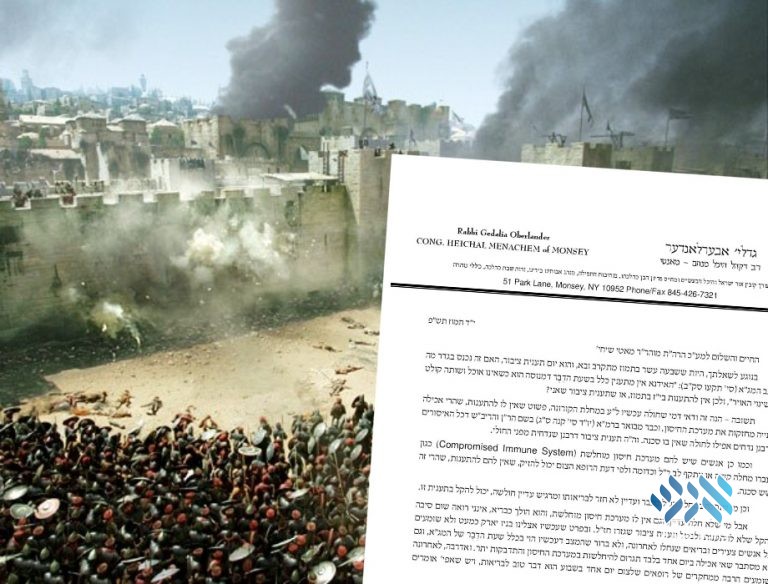 Continuing the discussion of fasting during the age of a pandemic, Monsey Rov Gedalya Oberlander writes that any healthy individual should be fasting, and it might even be beneficial. Other rabbonim in Russia and Eretz Yisroel wrote similar letters.

The question who must fast on 17 Tammuz this year is continuing to be debated by rabbonim around the world, with many releasing letters addressing the question.

Harav Gedalya Oberlander, rov of Heichal Menachem in Monsey, NY, and a member of Vaad Rabbonei Lubavitch, weighed in on the subject as well in a letter released earlier this week.

“In response to your question, whether 17 Tammuz this year would fall into the category discussed by the Magen Avrahahm, who writes that one may not fast during a raging pandemic,” begins the letter.

He goes on to write that one who is unwell, surely should not fast. This would include one who has a compromised immune system or one who had COVID-19 and did not yet fully recover.

“However with regards to one who is healthy, I see no reason why he should not fast,” he writes. “Especially in New York, where we haven’t been hearing about any young, healthy people getting sick lately. This does not fall into the category discussed by the Magen Avraham.

Harav Oberlander mentions that according to recent medical studies, fasting intermittently might even be healthy. He writes that he also spoke to a frum doctor who told him that there is no issue for a healthy person to fast.

This responsa follows the letters issued by the Beis Din Rabbonei Chabad in Eretz Yisroel, and the Crown Heights Beis Din. Other Chabad rabbonim also issued letters on the subject with slightly different conclusion.

Harav Yitzchok Aizik Landa, Chief Rabbi of Bnei Brak wrote that anyone who has any illness, even one which would not prevent him from fasting any other year, should not fast this year. Those that have even mild symptoms, or were tested positive but do not have symptoms, need not fast as well.

In Russia, Chief Rabbi Berel Lazar wrote a differing psak, saying that if one feels fine even after receiving a positive result, or if one only has slight symptoms such as loss of taste, must fast.

It must be noted that the different piskei dinim are mainly influenced by the current situation in each location. Eretz Yisroel is in midst of a severe outbreak, while New York is long beyond its peak. This stresses the need to ask a local rov, and not rely on hearsay, or a psak din passed around social media.