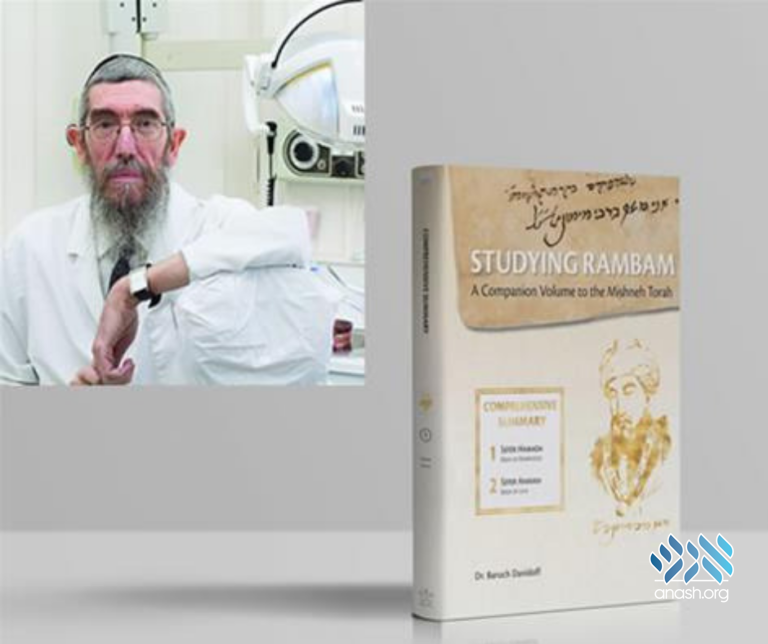 For 15 years, he had kept the undertaking to himself. Very few knew of the monumental project that he had spent countless hours perfecting. But as Jews around the world mark the completion of the 38th annual study cycle of Rambam’s Mishneh Torah, a world of new resources have been made available to aid in its study the 39th time around. And its author isn’t a rabbi or teacher.

He’s a dentist from London.

Dr. Baruch Davidoff began learning Rambam in 2003, as part of the daily Rambam study cycle introduced in 5744/1984 by the Rebbe. in His then-young children struggled to comprehend the often complex intricacies of the laws set forth in the Rambam’s’ 14-volume magnum opus, a work which, in the author’s own words, encompasses all of Torah.

So Davidoff decided to do something about it.

“When I first began, nowhere in my mind did I envision anything big,” Davidoff told Chabad.org. “It was going to be a series of summaries, focusing on the mitzvot. As I worked my way through the text, I would summarize it.” But as his writing progressed, it led to his creation of a number of innovative study aids. Soon, Davidoff was working on an index and a second, more comprehensive set of summaries to go along with the remastered and abridged concise version.

Then came more ideas: a reworking of the key facts in each set of laws, focusing on the essential points of each mitzvah, as well as a plethora of illustrations, charts and diagrams, laboriously hyperlinked and cross-referenced. “Rambam mentions each law once. He won’t remind you if a previously mentioned topic comes up again, so I thought it’d be nice to hyperlink to it,” Davidoff explains. And still, he told almost no one of his undertaking. “I didn’t want to expose it,” he explained simply. “It isn’t me.”

But it was at this point that Davidoff realized that his work had eclipsed its original purpose—as a study aid for his family—and had become something that could be useful to others. In his characteristic humility, he felt a work on Rambam had to be thoroughly examined by an expert. The reviewing process took more than a year, as multiple rabbis—including Dayan Levi Yitzchok Raskin, a senior rabbi in London’s Chabad-Lubavitch community—examined Davidoff’s many pages with the proverbial fine-toothed comb. Their warm approbations soon followed amid an enthusiastic general reception.

“What’s special about this study aid is the clarity,” says Rabbi Mendel Raskin, who heads London’s Lubavitch Kollel, an advanced study institution. “Until now, many would find the amount of detail and new concepts overwhelming and difficult to absorb. With this new edition, you can get real clarity in the chapters you’re learning.”

An idea that began as a study aid for a few young children had evolved into a comprehensive guide to one of the foremost works of Jewish law. And now, Davidoff was finally prepared to take the leap of publishing his work. And so RambamPress.com was born. Davidoff’s summaries were put to paper, while the tables and illustrations remained online—QR codes on the printed pages bridging the gap between digital media and the printed word. A bilingual index was published as well, with every term referenced in English and Hebrew. The books, which are on special offer for the month, can be shipped worldwide.

And finally, a few weeks ago, his website went live. It contains his series of study aids in digital form, as well as the daily Rambam-study schedule and links to Rabbi Eli Touger’s translation of Rambam on Chabad.org. Davidoff also digitized Itturei Hamelech, an index of the Rebbe’s teachings on Rambam prepared by Chazak Publishers, a work in which he was assisted by Rabbi Zalman Brackman of London’s Kollel.

After a whirlwind of last-minute touches, marketing and PR, Davidoff finally feels he can relax. “I spent 15 years indexing, summarizing and hyperlinking,” he says. “Now, I want to start really learning Rambam properly!”