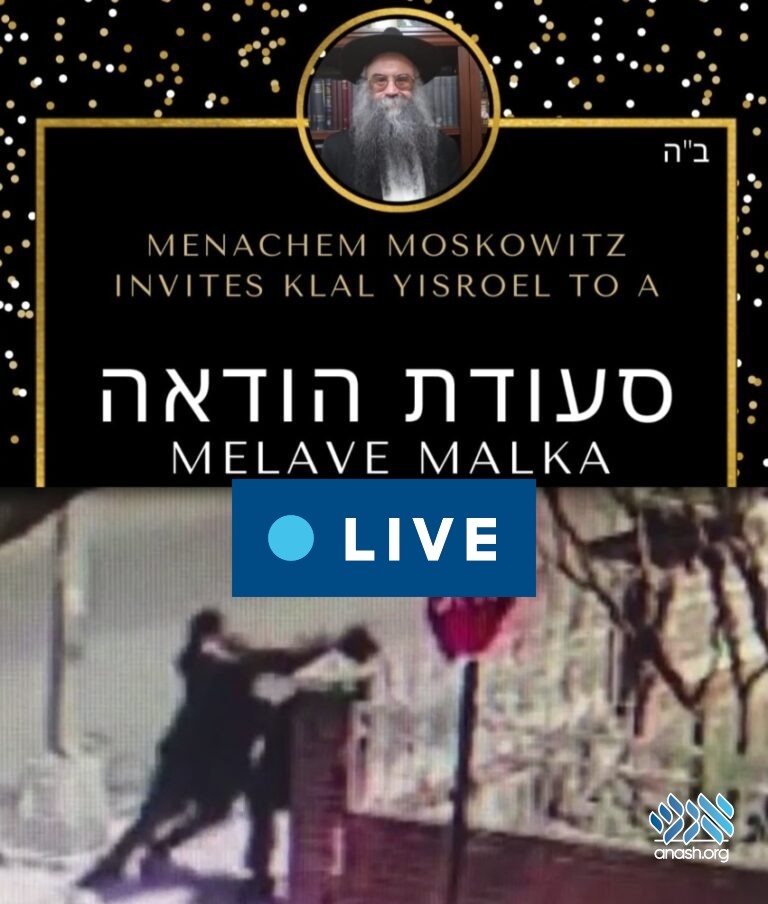 Join Live at 8:00 PM ET: A grand melave malka and seudas hoda’ah will celebrate the recovery of Rabbi Menachem Moskowitz who was attacked 4 years ago in an unprovoked, antisemitic attack.

Rabbi Menachem Moskowitz invites all of Klal Yisroel to a melava malka and Seudas Hodaah giving thanks to Hashem for his miraculous recovery in the unprovoked attack which left him badly bruised and with a fractured rib.

As reported on Anash.org, Brooklyn District Attorney Eric Gonzalez announced that James Vincent has been sentenced to 11 years in prison for strangulation and assault as hate crimes in the unprovoked attack against Rabbi Moskowitz, whom he cursed and strangled as the victim was walking home from Shul.

Throughout the trial, hundreds of Crown Heights residents and fellow Yidden logged on to the court proceedings to show their support. The community’s interest is said to have made a very big impression on the court and its officials handling the case.

The melava malka will be held this coming Motzei Shabbos Vayechi, at United Lubavitcher Yeshiva, 570 Crown Street, at 8:00 PM. The event is open to men, women, and children.

On April 21, 2018, at approximately 1 p.m., Rabbi Moskowitz, was walking home from his shul after Shabbos davening. He walked past the defendant in the vicinity of Rutland Road and East 46th Street in East Flatbush, when the defendant allegedly yelled, “You [expletive] Jew, you Jews took my house and mortgage.” Rabbi Moscowitz continued walking.

Moskowitz sustained a cracked rib along with a black eye, swelling, bruising, and scratches over his body.