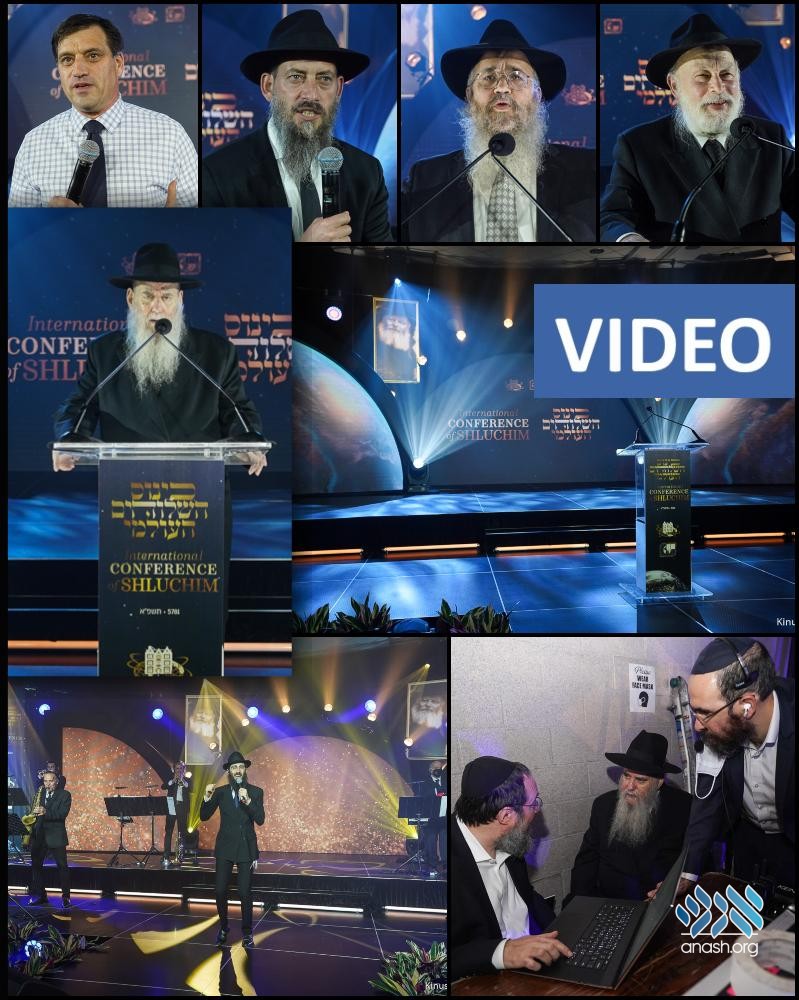 The Grand Event of the Kinus Hashluchim 5781 was vastly different than the banquet of previous years, but the inspiration, joy and energy were still there. Addresses were given by Rabbi Moshe Kotlarsky, Rabbi Yehuda Krinsky, Attorney Nathan Lewin, Rabbi Mendel Kalmenson and others.

“This year more than ever, I feel the need to be connected to my fellow shluchim.”

The Grand Event of the 5781 Kinus Hashluchim began with that powerful statement by Rabbi Sholom Lubin, Shliach to SE Morris County.

Similar sentiments were echoed many times over the event, which took place early Sunday afternoon to allow shluchim from Europe and Eretz Yisroel to view it live.

The Grand Event concluded a Kinus which was starkly different than those of previous years, and the event reflected that as well. Previous years had seen thousands of shluchim stream into Crown Heights for the Kinus Hashluchim weekend, and the annual banquet was a powerhouse of inspiration and joy, concluding with over 5,000 shluchim and guests dancing together.

This year, however, the coronavirus pandemic prevented the Kinus from taking place in its regular format. Instead, the entire program was moved online, and the shluchim joined each other from their offices and homes.

On Sunday, the thousands of shluchim tuned in to the virtual Grand Event, which took the place of the annual banquet. Tens of thousands of others watched the live stream on Chabad.org and Anash.org

The program was opened by Rabbi Moshe Kotlarsky, Vice Chairman of Merkos L’inyonei Chinuch, and began with a clip of highlights from previous banquets, including snippets of addresses by Senator Joseph Lieberman, Mr. Yehuda Avner, Mr. Sami Rohr, Rabbi Lord Jonathan Sacks and other memorable moments.

Greeting were then presented from shluchim around the globe, who spoke of the need to connect with other shluchim even as the pandemic kept them apart physically.

The Rebbe’s kapital, Kuf Yud Tes, was divided into 22 sections, for each of the Alef Beis. The first was recited in the Rebbe’s Ohel by Rabbi Mendy Sternbach, a new shliach to Nigeria. The next 20 sections were recited by young shluchim around the world, and the final section was recited in the Rebbe’s room in 770 by Rabbi Elchonon Marozov of France.Rabbi Chaim Baruch Halberstam recited the Rebbetzin’s kapital at her holy resting place.

“A Story of Hope” presented the story of Rabbi Mendel Cohen, shliach to Mariupol, Ukraine, who continued serving his community despite a war, terror attack and most recently, the COVID-19 virus causing his hospitalization and evacuation to Eretz Yisroel. He then recited kapital chof at the Kosel in Yerushalayim.

Throughout the evening, musician Avremi G and the band led by Nochi Krohn played niggunim, accompanied by singer Eli Marcus.

The Dvar Torah of the evening was given by Rabbi Yosef Rosenblum, shliach to Pittsburgh, followed by greetings by Rabbi Yehuda Krinsky, Chairman of Merkos L’inyonei Chinuch, who also introduced the guest speaker, Attorney Nathan Lewin.

Mr. Lewin spoke of his court battle for the Rebbe’s seforim and his assistance to numerous shluchim across the USA in their efforts to erect a public menorah. Rabbi Korlarsky followed with a global update of the shluchim’s activities around the world during the pandemic.

A moving moment at the Kinus was a video presentation showing the Wolff family in Hanover, Germany, following the passing of their father, Rabbi Benny Wolff a”h, and the new building that was purchased in his memory.

Rabbi Dov Drizin and his congregant Mr. Stu Gold of Woodcliff Lake, NJ, described the Chabad response to COVID-19, when all regulars activities, including shuls, classes and visits had to suddenly stop.

Annually, a highlight of the Banquet is the Roll Call, led by Rabbi Kotlarsky, director of the International Conference of Chabad-Lubavitch Emissaries and vice chairman of Merkos L’lnyonei Chinuch, the educational arm of the Chabad-Lubavitch movement. This year, as every year, the Roll Call highlighted the expansion of the network of shluchim around the world and celebrates the opening of centers in new countries and territories.