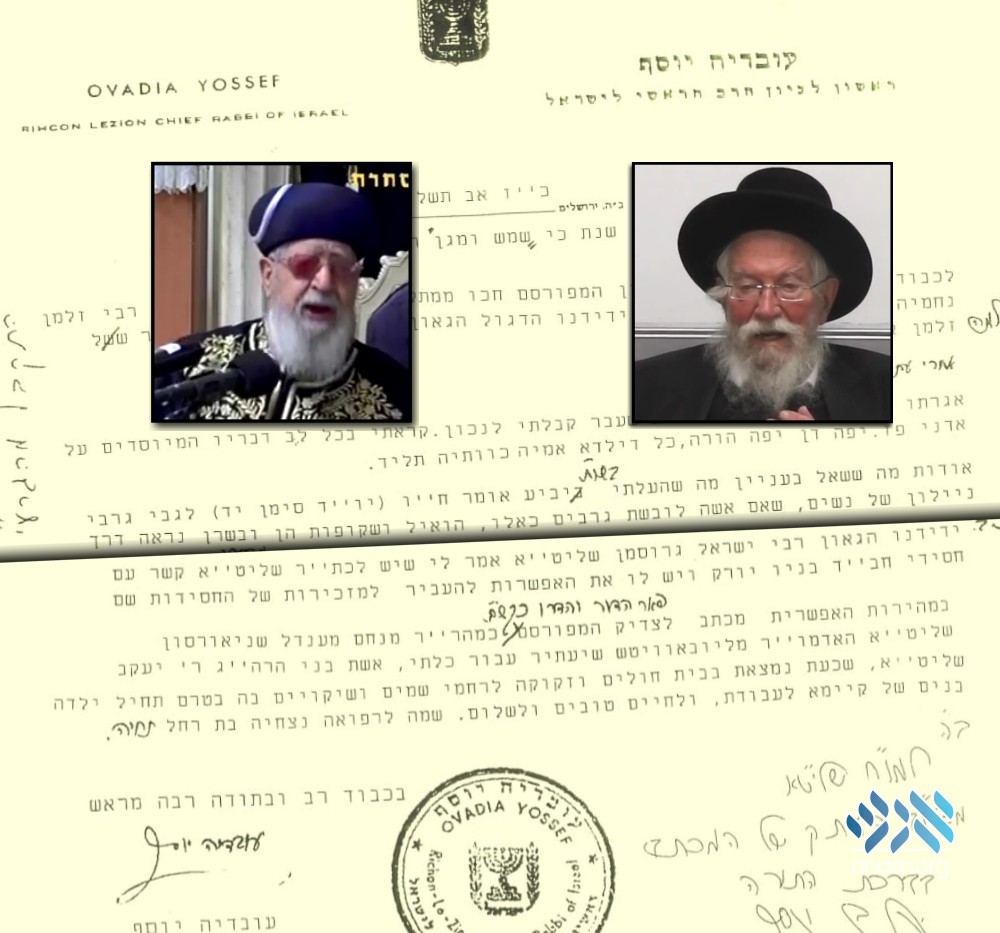 A newly uncovered letter from the archives of renowned possek Harav Zalman Nechemia Goldberg a”h reveals a fascinating angle in the connection between the Rebbe and Sefardi leader Harav Ovadia Yosef.

A newly uncovered letter from the archives of renowned possek Harav Zalman Nechemia Goldberg a”h reveals a fascinating angle in the connection between the Rebbe and Sefardi leader Harav Ovadia Yosef.

The letter was published after being discovered following the passing of Harav Zalman Nechemia last week, seemingly as his family began to go through his vast archives of responsa from his decades in Rabbonus.

The letter was written by Harav Ovadia Yosef, Chief Rabbi of Israel, a renowned possek who was widely considered the leader of Sefardic Jewry. Dated on 27 Av, 5739 and addressed to Harav Zalman Nechemia, the letter begins with a halachic disccussion regarding tznius and a psak brought in one of Harav Ovadia’s seforim.

At the end of the letter, Harav Ovadia adds a postscript, before signing his name.

“Our friend the Gaon Harav Yisroel Grossman told me that you have a connection with Chabad chassidim in New York, and you have the ability to swiftly send the secretariat of Chabad a letter addressed to the glory of our generation, kvod kdushas the Lubavitcher Rebbe. Please ask him to daven for my daughter-in-law, wife of my son Harav Yaakov who is in the hospital and needs heavenly mercy,” he wrote.

The letter itself is spellbinding, revealing an previously unknown aspect of the connection between the Rebbe and Harav Ovadia. But the story did not end there. After the publication, a grandson of Harav Ovadia revealed the back story of the letter, giving more context to the story.

The details were revealed in a Facebook post written by Rabbi Yonatan Yosef who said that the letter had a special connection to him.

“The context of the letter was that my mother, over a period of 7 years, had three miscarriages in the ninth month of pregnancy. My father traveled to the Baba Sali to ask for a bracha for my mother to have a healthy child, and indeed my mother became pregnant again. But the doctors weren’t taking any chances and hospitalized my mother starting from the fifth month of the pregnancy,” he wrote.

“The worry of the family that chas v’shalom another miscarriage would take place, led my grandfather to ‘turn over the world’ with davening for a healthy birth. This was the reason he asked Harav Zalman Nechamia to ‘pull connections’ with Lubavitch for a bracha from the Rebbe,” he wrote.

“Indeed, the bracha was fulfilled with the birth of a healthy child. That child is me,” he concluded.