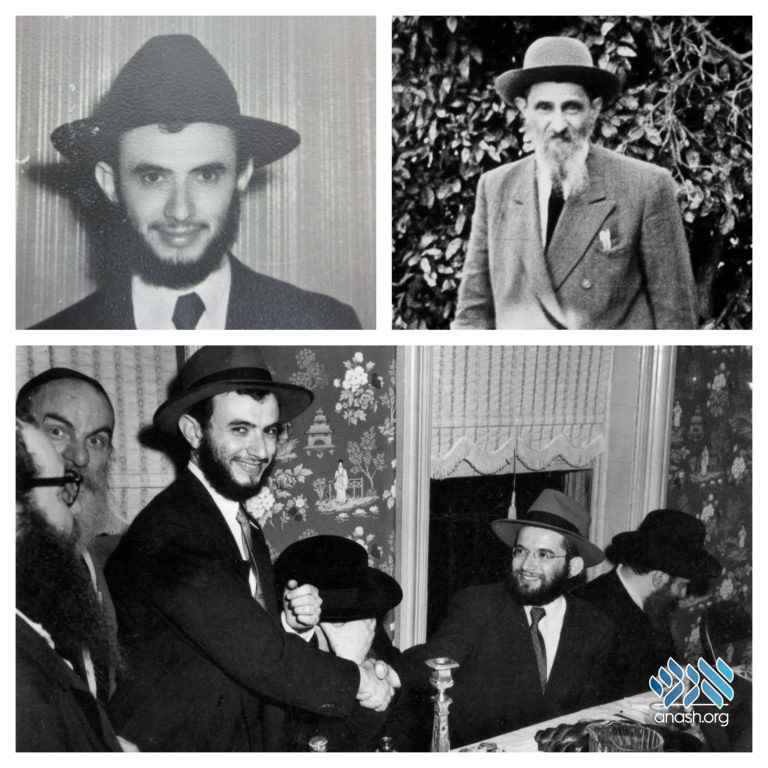 At a recent wedding of a grandchild of Reb Nosson, a teshura was published with a trove of incredible letters from Reb Nosson and his father Reb Moshe. Most of the letters discuss profound concepts in Chassidus, but some of the letters contain specific instruction in Avodas Hashem from Reb Moshe to his son.

Reb Moshe Gourarie was born in Kremenchug in the year 5659/1899. He learned in Yeshivas Tomchei Temimim in Lubavitch and married the daughter of Reb Ovadya Leiner, the Radziner Rebbe of Chelm, Poland, a grandson of the author of Mei HaShiloach and his son the author of the Beis Ya’akov.

Reb Moshe moved to Riga, Latvia and began sending food to his brethren in the Soviet Union. The Latvian Government wasn’t fond of this venture, and he and several other chassidim were arrested and banished from the country. The Frierdiker Rebbe instructed him to relocate to Eretz Yisroel, where he settled in Tel Aviv, then a center of chassidim who had recently arrived in the Holy Land.

In Tel Aviv, Reb Moshe served as mashpia to the local Anash community and was one of the foremost askanim for all things Chabad in Eretz Yisroel. A noteworthy task that he completed was arranging visas for fellow chassidim to leave the Soviet Union and go up to Eretz Yisroel.

Reb Moshe was known as an astoundingly deep thinker and maskil in Chassidus. He dedicated his entire life to studying Chassidus in great depth. Among his students in Chassidus was Reb Yoel Kahan שליט”א, the Rebbe´s chozer.

Reb Moshe’s son Reb Nosson was born in Moscow in the year 5689/1929. He grew up in Tel Aviv and was educated in Tomchei Temimim Lubavitch under the tutelage of the famous Mashpia Reb Shoiel Bruk. He later learned in 770 and was present by the Rebbe’s first maamar on Yud Shvat 5711/1951. After his marriage to Mrs. Hinda Gourarie – may she live and be well – (nee Chaikin), he lived in Montreal. He continued in his father’s footsteps and was completely immersed in the learning of Chassidus, with a reputation for being a great maskil.

Chassidus Lesson on a Mountaintop

In one of his letters (page 31), Reb Moshe mentions a visit to the top of a beautiful mountain; he writes, “I enjoyed seeing the wonders of nature from Hashem.”

Here is one of those exchanges (page 31):

“Although one can fulfill his obligation of limud hatorah just by learning one perek in the morning and one perek at night, or even by merely reciting Krias Shma – that is only the bare minimum, and one must do what he can not to suffice with the bare minimum alone.

“When pertaining to his physical needs every person puts in much time and effort to live with an abundance of physical comforts and not be satisfied with the minimum. This, despite being able to survive on a minimal amount of food and drink, since living constantly under such conditions would lead to him becoming weak and deteriorating. The same is true, and even more so, when it comes to his spiritual needs such as learning and davening.”

In one of the letters, Reb Moshe writes that the decision to make time for learning Torah in a proper way and not being satisfied with the bare minimum creates a keili for Hashem to provide the person with abundant parnassa.

“Hashem will for sure help you, and without a doubt, you will find a source of respectable parnassa so that you can learn nigleh and Chassidus. It is all dependent on the decision a person makes when he takes upon himself the yolk of parnassa. If he decides not to be overly encumbered by his work and he sets aside time in the day for Torah learning and avodas Hashem, then Hashem will help that he will not be overly bothered by his work.”

In one of the letters, Reb Moshe encourages his son to get his children into a routine where they review what they learned many times over. In his words: (page 33):

“It is also important to review every daf of Gemara and every perek of Tanya many times. Lack of reviewing what he learned will hinder his further growth; later on, he will realize that he forgot what he learned in his formative years because he did not review the material. In addition, if a sugya (topic) of Torah is well understood and ingrained in the memory with clarity, it can help in other areas of Torah as well.

“On a positive note, if a child remembers what he learned, then B’ezras Hashem, he will act properly, further magnifying the good that comes from learning Torah.”

One of the more important letters contains Reb Moshe’s guidance in being mechanech children. Reb Moshe encourages his son not to think at all about what his children will do for parnassa when they grow up, rather he should be concerned with their complete devotion to Torah study.

“I was pleased that you are arranging for there to be Torah learning all day in Yeshiva. There’s no need to give time to the thoughts of what will be later in life, that they will need language skills, etc. Trust in Hashem; if you don’t there may be no end to this matter. [If one doesn’t trust in Hashem and therefore thinks it is imperative for him to teach his children fluency in the local language, he can be asked] does fluency in the local language alone suffice? There are many more subjects and much more knowledge necessary to succeed in this world [thus there is no end to the matter, and ultimately one must trust in Hashem regardless].

“This is the mistake of people who do not withstand this test and run their lives according to the ways of the world. But this is not our lot. Boruch Hashem, he has separated us from the mistaken and the lost. You and I, my son, have been challenged in this matter. I have seen firsthand, that the fact that I did not learn any secular studies at all was never the slightest impediment to my earning a good parnassa. I do not regret my decision in the way I raised you at all, in fact, quite the contrary.

“People would ask me, “what are your plans regarding your son? What are you doing? How will he sustain himself without any secular studies?” The truth is, I never made any calculations or entered into arguments with others because arguments that are built on the natural order of the world are very hard to answer or completely resolve. As the possuk says, “Do not answer [a fool]”. Hashem will do what He needs to do for the good. I am writing all of this to make the battle within yourself easier, as the saying goes: “two yetzer tovs join together to fight one yetzer hara.”

Not Enough to Just Know Chassidus

One of the concepts that often is repeated in his letters is the need to not be satisfied with what we understand in Chassidus but to find practical applications for what has been learned.

Reb Moshe elaborates on this concept with the following:

“You [surely] know about the ‘raging waters’ [ed. note: a term used in Chassidus for the tirdos haparnoso that cause one to become lost in worldly matters rather than avodas Hashem]. What would be good for a person is to make the mind control the heart [and not allow the ‘raging waters’ to cause him stress and stop him from serving Hashem properly]. This involves a lot of work, and in the end, Hashem’s way will prevail. Worries are not of any help.

This is also my advice to you, to constantly contemplate this matter. The truth is that almost everyone who learns Chassidus grasps this basic concept, but what is lacking is taking the Chassidus to heart and acting in a way that the brain understands. People see this anomaly, that there is an inconsistency between what the mind understands and what the heart feels, and how much more so, between feeling and action. This requires constant effort.”  (page 25)

¨The main thing is not the intellect and understanding, which people have no power to change. That which they do understand is not enough, as we see first-hand that they understand clearly what needs to be done but they don’t do it, or they do the opposite. This is because the intellect is only the haoro [‘ray’ – not the essence, but a mere external part] of the nefesh. What’s most important, is that which comes from beyond intellect, from the will of a person. Like how intellect interacts with the midos. If only a person can recognize in his youth that which he sees in his old age, because then he sees that time is so precious, and lost time cannot be returned to him.”

“I saw, Boruch Hashem, throughout my life that when I was faced with what appeared to be an unscalable mountain, my intellectual cheshbonos together with my nature of moro shechoro made the mountain seem even higher. But in the end, Hashem helped me, as there are no hindrances in front of Hashem [i.e all the worries were for no reason].

“For those that have tasted from the “tree of life” of Chassidus, they do not lack in understanding and knowledge. They have the wherewithal to answer what is a seeming difficulty in any matter. They also have the tools to push away any distracting thoughts and they have the ability to strengthen their faith. What is lacking is the ability to bring all of this into the heart and into feelings. The heart is the “poel mamash” of the mind.”