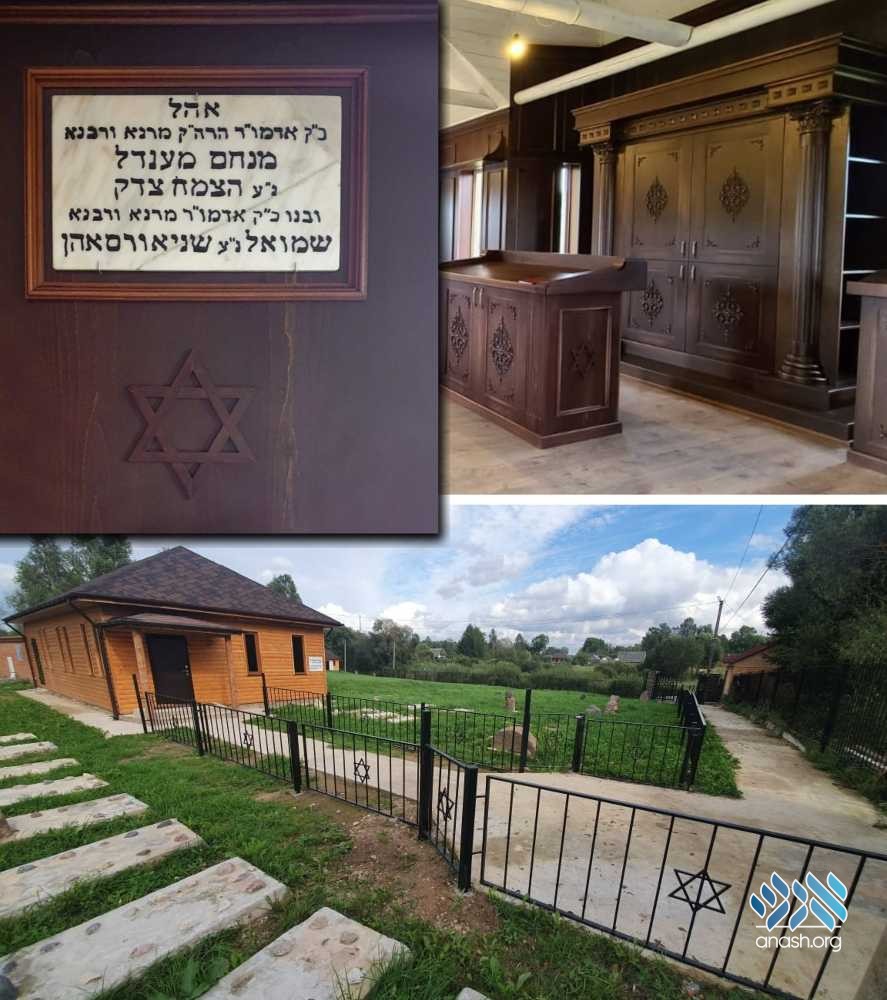 The shul bordering the Ohel in Lubavitch, which was known as the ‘Akeda Shul’ after a heavenly event which took place there, was rebuilt and restored just in time for Yud Gimmel Tishrei.

Just ahead of the Rebbe Maharash‘s yahrzeit on Yud Gimmel Tishrei, the restoration work on a historic shul near his Ohel was completed.

Rabbi Nachman Kahn, who learned in the original Tomchei Tmimim in Lubavitch, described the shul in his book “Lubavitch V’Chayoleha”.

“The main entrance to the Ohel was accessed by going through the shul that was built next to it. On the North wall, there was a door through which one would enter the Ohel. In front of the door, there was a wooden board to mark that Kohanim could not go further,” he wrote.

During the years that Lubavitch served as the headquarters of the Chabad movement, minyonim took place in the shul every Shabbos and Yom Tov.

Among chassidim, the shul was referred to as the ‘Akeda Shul’, in reference to a heavenly event that took place there, as related by the Rebbe on Yud Beis Tammuz 5720: When the Frierdiker Rebbe was 15 years old, the Rebbe Rashab brought him to the shul, after first toveling in the nearby river.

Once in the shul, the Rebbe Rashab opened the Aron Kodesh and said “I am bringing my son to the akeda,” referring to Akedas Yitzchok.

“In the matter of the Akeda, there is the one binding, and the one being bound. Avraham Avinu bound his son Yitzchok so there would be no p’soul, any invalidation chas v’shalom. I want the Akeda to be as desired. I am making a covenant with you. From today, I will hand over to you the work of public affairs in both material and spiritual matters.”

After the departure of the Rebbe Rashab and the Tomchei Tmimim Yeshiva from the town of Lubavitch during the First World War, non-Jewish residents of the town demolished the Ohel and the Shul and set them on fire.

“Below a large pile of earth and dirt, we discovered the original floor, and remains of lamps, nails and hinges from the Shul,” Rabbi Gordon told Anash.org.

“In the newly installed floor, certain parts were made of glass to allow visitors to see the original, burnt floor,” he said.

As part of the restoration, the Shul was returned to full functionality, with an Aron Kodesh, Bima, library and places to daven and learn. Just recently, a minyan for Selichos was held in the shul, for the first time since it’s destruction, decades ago.

Rabbi Gordon said that he is “very excited” about the restoration and that for the first time, Kohanim will be able to daven in close proximity to the Ohel.

“A special thank you goes to philanthropist Rabbi Yossi and Batsheva Popack, along with Mendel Levin of Crown Heights, and the ‘Geder Avos’ organization, founded by Rabbi Moshe Yosef Rubin of Câmpulung zt”l,” he said. “Even despite the challenges posed by the coronavirus, they continued to support the restoration work in Lubavitch.”