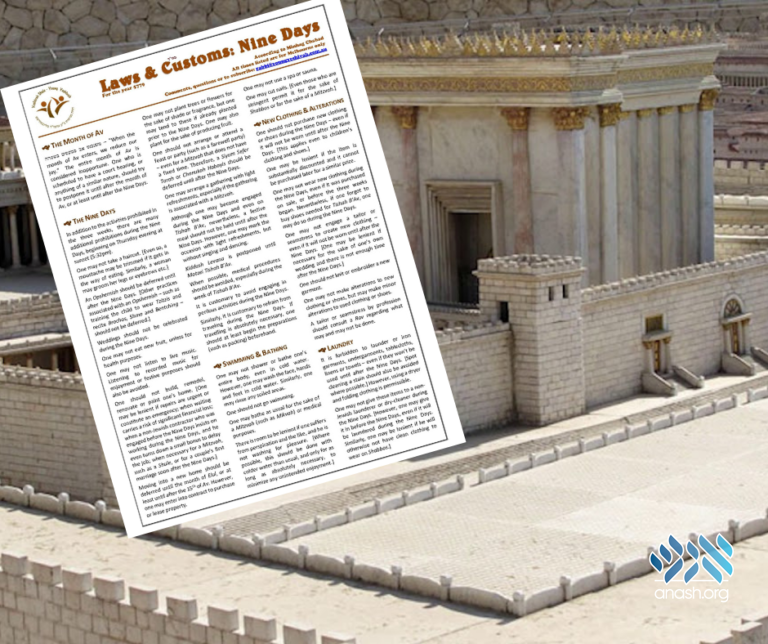 The following is a Halacha guidebook for the 9 Days, compiled by Rabbi Shmuel Lesches, Rov of Young Yeshivah Shul in Melbourne, Australia.

In addition to the activities prohibited in the three weeks, there are many additional prohibitions during the Nine Days, beginning on Thursday evening at sunset (5:32pm).

One may not take a haircut. [Even so, a moustache may be trimmed if it gets in the way of eating. Similarly, a woman may groom her legs or eyebrows etc.]

An Opshernish should be deferred until after the Nine Days. [Other practices associated with an Opshernish – such as training the child to wear Tzitzis and recite Brochos, Shma and Bentching – should not be deferred.]

Weddings should not be celebrated during the Nine Days.

One may not eat new fruit, unless for health purposes.

One may not listen to live music. Listening to recorded music for enjoyment or festive purposes should also be avoided.

One should not build, remodel, renovate or paint one’s home. [One may be lenient if repairs are urgent or constitute an emergency; when waiting carries a risk of significant financial loss; when a non-Jewish contractor who was engaged before the Nine Days insists on working during the Nine Days, and he even turns down a small bonus to delay the job; when necessary for a Mitzvah, such as a Shule, or for a couple’s first marriage soon after the Nine Days.]

Moving into a new home should be deferred until the month of Elul, or at least until after the 15th of Av. However, one may enter into contract to purchase or lease property.

One may not plant trees or flowers for the sake of shade or fragrance, but one may tend to these if already planted prior to the Nine Days. One may also plant for the sake of producing fruit.

One should not arrange or attend a feast or party (such as a farewell party) – even for a Mitzvah that does not have a fixed time. Therefore, a Siyum Sefer Torah or Chanukah Habayis should be deferred until after the Nine Days.

One may arrange a gathering with light refreshments, especially if the gathering is associated with a Mitzvah.

Although one may become engaged during the Nine Days and even on Tishah B’Av, nevertheless, a festive meal should not be held until after the Nine Days. However, one may mark the occasion with light refreshments, but without singing and dancing.

When possible, medical procedures should be avoided, especially during the week of Tishah B’Av.

It is customary to avoid engaging in perilous activities during the Nine Days.

Similarly, it is customary to refrain from traveling during the Nine Days. If travelling is absolutely necessary, one should at least begin the preparations (such as packing) beforehand.

One may not shower or bathe one’s entire body, even in cold water. However, one may wash the face, hands and feet in cold water. Similarly, one may rinse any soiled areas.

One should not go swimming.

One may bathe as usual for the sake of a Mitzvah (such as Mikvah) or medical purposes. There is room to be lenient if one suffers from perspiration and the like, and he is not washing for pleasure. [Where possible, this should be done with colder water than usual, and only for as long as absolutely necessary, to minimize any unintended enjoyment.]

One may not use a spa or sauna.

One should not purchase new clothing or shoes during the Nine Days – even if it will not be worn until after the Nine Days. [This applies even to children’s clothing and shoes.]

One may be lenient if the item is substantially discounted and it cannot be purchased later for a similar price.

One should not knit or embroider a new garment.

A tailor or seamstress by profession should consult a Rov regarding what may and may not be done.

It is forbidden to launder or iron garments, undergarments, tablecloths, linens or towels – even if they won’t be used until after the Nine Days. [Spot cleaning a stain should also be avoided where possible.] However, using a dryer and folding clothing is permissible.

One may launder the clothing of young children – who soil their clothing constantly – as necessary. Similarly, a married woman may launder and use Levanim as needed. [When washing by hand, it is best to launder only a few items at a time. However, when washing with a machine, it is best to reduce the number of loads by washing as many items together as possible. Even so, one may only include items which are permissible to wash.]

A launderer by profession should consult a Rov regarding what may and may not be done.

If one neglected to do so, there is room to be lenient and allow these items to be worn or used after leaving them on the ground for a while.

The above does not apply to undergarments and socks; the accepted practice is to change them as necessary, even if they are freshly laundered.

One may provide a guest with fresh linens and towels. However, it is fitting for the guest to leave them on the ground for a while before using them.

 MEAT & WINE Meat and wine are associated with joy. Additionally, the Avodah in the Beis Hamikdash – which was interrupted in the Nine Days – involved primarily meat and wine. Therefore, one may not eat poultry and meat, nor drink grape-juice and wine, unless for health purposes.

One should not even partake of a dish which is merely flavoured with meat or gravy, grape-juice or wine. [However, one may use wine vinegar.]

One may eat Parve food that was prepared in a clean Fleishig pot or utensil.

Other alcoholic beverages are permitted, but one should be mindful of the “spirit of the law”.

When performing a Mezuman, one should not use a Kos, even if he is ordinarily accustomed to doing so.

It is Chabad custom not to eat meat and wine even when celebrating a Siyum.

During these days, it is appropriate for both men and women to increase in one’s Torah studies, with special focus on the Halachos of the Nine Days, as well as learning about the Geulah and the Beis Hamikdash (e.g. chapters 40-48 of Yechezkel, tractates Middos and Tomid, and Hilchos Beis Habechira in the Rambam).

It is also appropriate to increase in Tzedakah and Ahavas Yisroel. These activities should especially be performed in association with Siyumim.

As we get closer to the days of Moshiach, we start to focus on the inner purpose of the destruction, which is to bring us to an even higher level – the third Beis Hamikdash. Therefore, we moderate the sadness with permissible expressions of joy. As such, one should participate in a Siyum every day of the Nine Days, including Shabbos, and if possible, until the 15th of Av.

The Siyum should preferably be done on a Masechta of Gemoro (as opposed to Mishnayos). The Siyum may even be made by a child.

One recites the normal Kaddish D’rabannan at the conclusion of the Siyum, and not the “Kaddish Hagadol” printed in the back of the Gemoro.

Ideally, the Siyum should be on a Masechta whose conclusion is easy for all the participants to understand. The one making the Siyum should present it in an easy and well-understood manner.

If possible, the Siyum should be associated with food (and even a Farbrengen), but not meat or wine.

If necessary, one may taste the Fleishig food when preparing it for Shabbos, provided that it is expelled without swallowing. Apart from that, one may not partake of any Fleishig Shabbos foods on Erev Shabbos, even if one is normally accustomed to doing so.

Shabbos clothing is worn as usual and care is taken not to display any signs of mourning. In fact, one should be even more joyous than usual.

One may – and should – eat meat and drink wine on Shabbos.

The Aliyah of Chazak is given to a prominent person. The congregation stands for the last Posuk. The person receiving the Aliyah also recites “Chazak Chazak vNischzek”.

It is customary for the Gabboim to arrange a Farbrengen with the purpose of increasing resolutions in learning Torah, keeping Mitzvos B’hidur, and rejoicing in the completion of the Torah.

Havdallah is recited on wine. In the first instance, the wine should be drunk by a child who understands the concept of Brochos (the younger, the better). If that is not an option, the wine is drunk by the one who recited Havdallah.

Shabbos clothing is worn on Motzei Shabbos, as usual.

This day is the yohrtzeit of the Arizal. One should mark the day by increasing one’s efforts in spreading the inner dimension of Torah.

Shabbos Chazon this year falls on the 9th of Av. See separate Halacha Guide for laws and customs of Shabbos Chazon and Tisha B’Av.