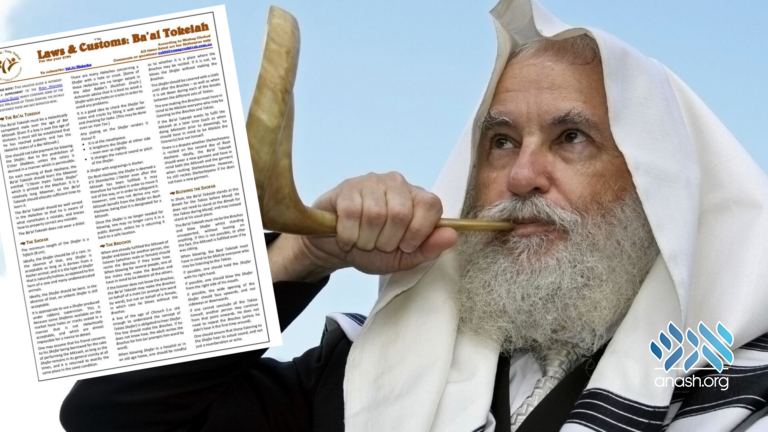 The following is a Halach guide for Tekiyas Shofar compiled by Rabbi Shmuel Lesches, Rov of Young Yeshivah Shul in Melbourne, Australia. Click here to download a PDF version.

One should not take payment for blowing the Shofar, due to the prohibition of S’char Shabbos, unless the salary is devised in a manner which is permissible.

The Ba’al Tokeiah should be well versed in the Halachos so that he is aware of what constitutes a mistake, and knows how to properly correct any mistake.

The Ba’al Tokeiah does not wear a Kittel.

The minimum length of the Shofar is a Tefach (8 cm).

Ideally, the Shofar should be of a ram. In the absence of that, any Shofar is acceptable as long as it derives from a Kosher animal, and it is the type of Shofar that is naturally hollow, as opposed to the horn of a cow and many undomesticated animals.

Ideally, the Shofar should be bent. In the absence of that, an unbent Shofar is still acceptable.

It is appropriate to use a Shofar produced under rabbinic supervision. This is because some Shofaros available on the market have holes or cracks sealed in a manner that is not Halachically acceptable, and which are almost impossible for a novice to detect.

One may assume that his friend consents to his Shofar being borrowed for the sake of performing the Mitzvah, as long as the Shofar remains in its general vicinity at all times, and it is returned to exactly the same place in the same condition.

There are many Halachos concerning a Shofar with a hole or crack. [Some of these Halachos are no longer extant in the Alter Rebbe’s Shulchan Oruch.] Achronim advise that it is best to avoid a Shofar with any holes or cracks in order to avoid any problems.

It is a good idea to check the Shofar for holes and cracks by filling it with water and checking for leaks. [This may be done even on Yom Tov.]

Any plating on the Shofar renders it Possul if:

• It is at the mouthpiece.

• It lengthens the Shofar at either side – even ever so slightly.

• It changes the natural sound or pitch of the Shofar.

A Shofar with engravings is Kosher.

On Rosh Hashana, the Shofar is deemed a K’li Shemlachto L’Hetter even after the Mitzvah has been fulfilled. It may therefore be handled in order to move it out of the way, or in order to safeguard it.

However, one may not derive any non-Mitzvah benefit from the Shofar on Rosh Hashana, being that it is designated for a Mitzvah. Once the Shofar is no longer needed for blowing, one may no longer carry it in a public domain, unless he is returning it back to a safe location.

When one already fulfilled the Mitzvah of Shofar and blows for another person, the listener (whether male or female) should recite the Brochos if they know how. When blowing for several people, one of the males may make the Brochos and have in mind to be Moitzie all the others.

A boy of the age of Chinuch (i.e. old enough to understand the concept of Tekias Shofar) is obligated to hear Shofar. The boy should make the Brochos. If he does not know how, the adult recites the Brochos for him (or prompts him word by word).

When blowing Shofar in a hospital or in an old age home, one should be mindful as to whether it is a place where the Brochos may be recited. If it is not, he blows the Shofar without making the Brochos.

The Shofar should be covered with a cloth until after the Brochos – as well as when it is set down during each of the breaks between the different sets of Tekios.

The one making the Brochos must have in mind to be Moitzie everyone who may be listening to the Brochos and Tekios.

If the Ba’al Tokeiah wants to fulfil the Mitzvah at a later time (such as when doing Mivtzoim prior to davening), he should have in mind to be Moitzie the listener(s) but not himself.

There is a dispute whether Shehecheyanu is recited on the second day of Rosh Hashana. Ideally, the Ba’al Tokeiah should wear a new garment and have in mind both the Mitzvah and the garment when reciting Shehecheyanu. However, he still recites Shehecheyanu if he does not have a new garment.

The Ba’al Tokeiah must recite the Brochos and blow Shofar whilst standing unsupported, without leaning on anything. If this is not possible, or after the fact, the Mitzvah is fulfilled even if he was sitting.

When blowing, the Baal Tokeiah must have in mind to be Moitzie everyone who may be listening to the Tekios.

If possible, the wide opening of the Shofar should face upwards, and not sideways or downwards.

If one cannot conclude all the Tekios himself, another person may continue from that point onwards. He does not need to repeat the Brochos (unless he didn’t hear it the first time around).

One should ensure that those listening to the Shofar hear its actual sound, and not just a reverberation or echo.

One should blow all of the Tekios after sunrise and before sunset.

In extenuating circumstances (as can occur on Mivtzoim), or after the fact, it is acceptable if blown after dawn with a Brocho, or before Tzeis without a Brocho.

Each of the Shofar sounds (i.e. each Tekiah, Shevarim and Teruah) must be blown in one breath.

In the Tekios before Musaf, there should be a slight pause between the Shevarim and Teruah, but no breath. The same applies for the Tekios after Musaf, as well as the Tekios blown for people who were not in Shule.

In the Tekios during Musaf, one should take a small breath between the Shevarim and Teruah, but not pause any longer than that.

If one did not pause at all between any two sounds (besides between the Shevarim-Teruah), it is invalid.

The length of each Shofar blast is measured in “Terumatin” which corresponds to the length of one short blast of the Teruah. The ideal length of the blasts are as follows:

Shevarim – Each of the three blasts should be exactly three terumatin.

Teruah – Nine terumatin or more. Our custom is to do many more this amount.

Shevarim – Each of the three blasts should be exactly three terumatin.

Teruah – Nine terumatin or more. Our custom is to do many more this amount.

 IF THE SOUNDS ARE TOO SHORT

If the Tekiah was shorter than eighteen terumatin, it is still valid as long as it was at least nine terumatin – but only if each of the three Shevarim sounds was less than nine terumatin each.

If any of the three Shevarim sounds was longer than eighteen terumatin, it is invalid.

If any of the three Shevarim sounds was between three and nine terumatin, it is acceptable.

If one of the Shevarim sounds was shorter than three terumatin and another sound of the same Shevarim was longer than nine terumatin, it is invalid.

If all of the Shevarim sounds were shorter than three terumatin, it is acceptable as long as each was discernibly longer than the Teruah sounds.

If the Tekiah was shorter than nine terumatin, it is still acceptable if it is at least six terumatin – but only if each of the three Shevarim sounds was less than six terumatin each.

If any of the three Shevarim sounds was longer than nine terumatin, it is invalid.

If any of the three Shevarim sounds was between six and nine terumatin, it is valid only if the Tekiah was nine terumatin or more.

If any of the three Shevarim sounds was between three and six terumatin, it is acceptable.

If one of the Shevarim sounds was shorter than three terumatin and another sound of the same Shevarim was longer than six terumatin, it is invalid.

If all of the Shevarim sounds were shorter than three terumatin, it is acceptable as long as each was discernibly longer than the Teruah sounds.

If the Tekiah or the Teruah was shorter than nine Terumatin, it is acceptable if it is at least three Terumatin.

 IF THE SOUNDS ARE INCORRECT

When one makes the following mistakes, he is required just to repeat the sound correctly, but does not have to return to the beginning of that Bava:

• If he attempted to blow a Tekiah but it was too short.

• In תשר״ת, if he blew only one or two Shevarim sounds before he began the Teruah, and he did not take a breath in between.

When one makes the following mistakes, he is required to return to the beginning of that Bava (i.e. the preceding Tekiah):

• If he blew even one Teruah before the Shevarim.

• If he blew additional Shevarim sounds after he finished a proper Shevarim and took a breath.

• If he blew additional Teruos after he finished a Teruah of at least three terumatin and took a breath.

• If he blew only one or two Shevarim, took a breath, and began the Teruah.

• If he blew additional Shevarim sounds after he finished a proper Shevarim and took a breath.

• If he blew even one Teruah sound at any point.

• If he blew additional Teruos after he finished a Teruah of at least three terumatin and took a breath.

• If he blew even one Shevarim sound at any point.

If the Ba’al Tokeiah did not realize that he made a mistake which requires him to return to the beginning of the Bava, he should redo that entire Bava at his earliest opportunity. Nevertheless, if he realized whilst in the midst of a subsequent Seder, he should complete that Seder before redoing the Bava.

Mistakes made in the thirty sounds customarily blown after Musaf technically do not need to be corrected. However, if there is even the slightest possibility that someone present is relying on these Tekios to fulfil his obligation, any mistake must be corrected as per above.

When blowing Shofar for a man who cannot or will not listen to all thirty blasts (a possibility on Mivtzoim), one adopts either of the following approaches, without reciting a Brocho:

• One should blow תשר״ת תשר״ת תשר״ת, making sure to breathe between the Shevarim and Teruah, and (both the blower and the listener) having in mind that any blasts not required Min-Hatorah are being blown for ulterior purposes, and not for the sake of the Mitzvah.

These techniques should be adopted only in exceptional circumstances, when there is absolutely no other choice. [Each of these techniques have certain advantages over the other. It is therefore hard to establish which is the better option. However, the second approach seems less practical, as it is unlikely that someone on Mivtzoim will grasp the nuances of the intentions he needs to have.]