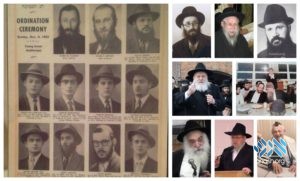 The following is a newspaper announcement in a local Jewish Montreal paper for the Chag HaSemicha of Yeshiva Tomchei Tmimim of Montreal, Canada, in 5715/1955. The other two pages are the journal handed out at the actual occasion.

Rabbi M. Chaikin – Rav Meir Chaim Chaikin was a rov in Russia until he was sent to Siberia. After the war, he was a rov in Stockholm, as well as in Montreal. There he was appointed Rosh Yeshiva of the Yeshiva Tomchei Tmimim. He passed away at the age of 58 on 15 Kislev 5726/1955.

Rabbi I. Hendel – Rav Yitzchok Hacohen Hendel was the prize talmid of the yeshiva in Otwock, Rav Hendel was one of the nine talmidim who left Kobe, Japan and arrived in Montreal in 5702/1941. A few years later he was appointed rov of the Lubavitcher kehillah by the Frierdiker Rebbe, a post he filled for 60+ years, until his passing on 12 Adar, 5767/2007.

Nissan Mangel – Rabbi Nissan Mangel was born in Czechoslovakia and miraculously survived the war as a young child. Today, he lives in Crown Heights and is a renowned author and lecturer, but most of all a teacher of thousands over the years.

Zalman Marasow – Rabbi Zalman Marozov was the grandson of Reb Chonye Marozov. He learned in Tomchei Tmimim’s underground yeshivos in Russia, as well as in Brunoy under Reb Nissan Nemanov. He later came to Montreal and worked as a shochet. Later, he was appointed mashpia in that kehillah. He passed away at the age of 71 in 5763/2003.

Beryl Mockin – Rabbi Berel Mochkin is the son of the mashpia Reb Peretz Mochkin. He has served as shliach and head of Tzach in Montreal for over sixty years.

Jacob Schwei – Rav Aharon Yakov Schwei is a younger brother of Rav Aizik Schwei. He was for many years a maggid shiur in the Lubavitcher Yeshiva on Ocean Parkway. He later was elected as one of the rabbonim of the Crown Heights Beis Din, where he serves until today.

Marcel Weisman – Attorney Marcel Weisman survived the Holocaust by hiding with non-Jews in Czechoslovakia. Later, he was a famous lawyer in New York, where he was active in many Jewish organizations. He passed away in Kislev 5779/2018.