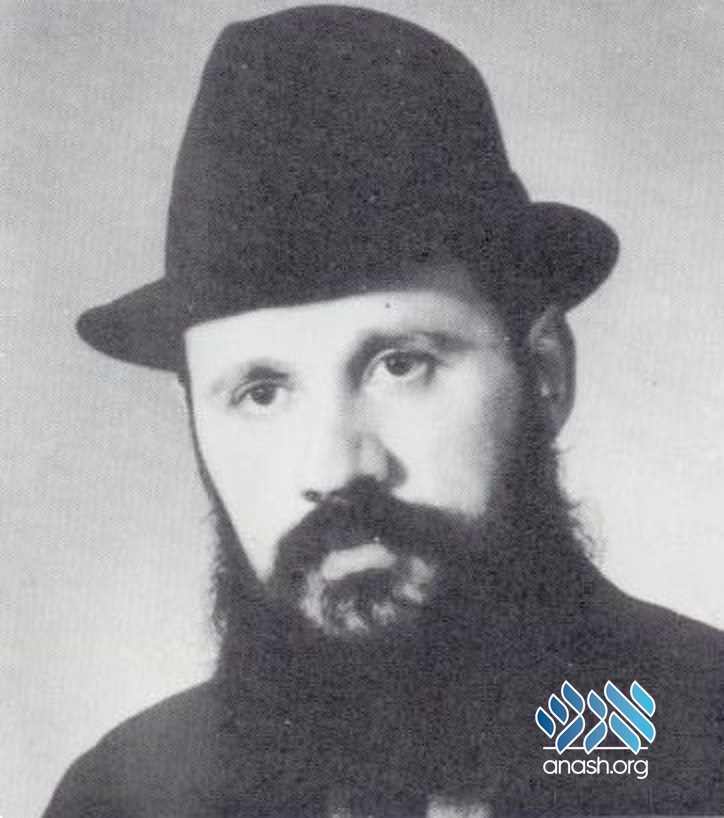 26 Iyar is the yahrtzeit of Rav Aizik Schwei, the rosh yeshiva of Tomchei Tmimim in Montreal.

Born on Simchas Torah 5693/1932 in a small town- Abu- in Finland to the tomim Reb Mordechai Eliyhau Schwei – Aizik was born on shlichus. Aizik’s father was sent to Abu by the Frierdiker Rebbe to work with the youth and in general spread yiddishkeit. His father had spent several years learning in Lubavitch and then traveled to Dvinsk where he spent his days al haTorah ve’al ho’Avodah. There he merited to learn in the house of the Rogatchover and be meshamesh him. His mother, the tzidkonis Bunia was from a home of Chassidim that went all the way back to the Alter Rebbe.

When Aizik was three years old his family moved to Narva, Estonia where his father was appointed rov and shochet until the Soviet invasion in 5700/1940. When the Soviets forced all able-bodied men to sign up for civil defense and dig trenches, Bunia went in place of her husband, so that if chas vesholom something should happen to her… her husband would be able to raise the boys al pi torah. In 5702/1942 the family escaped eastward, to Bukhara, where Reb Mordechai Schwei passed away. Bunia also buried her oldest daughter Hinda, r”l.

In Bukhara staying alive was hard enough. Food was scarce and her husband was not there to provide for the family, but for Bunia Schwei what worried her more was that her children receive a Torah education. When she heard that the gaon the Tchebiner Rov was in the city of Bukhara she took her two sons and begged him to learn with them. Not being able to pay schar limud she would bring water to his home and clean and maintain his home.

A while later she learned from Reb Lazer Mishulovin that the Yeshiva Tomchei Tmimim had been organized in Samarkand. With great self-sacrifice, despite being alone, one by one, she sent her boys away – not seeing them for over two years, until she could move to Samarkand to join them and be part of the community there. Young Aron Yakov – today a rov in Crown Heights – was only seven years old when his mother sent him off to yeshiva. Mrs. Schwei’s mesiras nefesh for Torah didn’t stop with the end of the war. After liberation, she continued to do everything so that her boys could learn Torah, no matter the type of work.

When Aizik got to yeshiva he had not been in a proper yeshiva setting for several years, but that didn’t keep him from catching up to his level, and soon to get to to the top his class. Very soon, everybody in yeshiva knew about Aizik and his accomplishments in learning Torah. In addition to his grasp of learning, his midos tovos and good nature only added to his prestige. When the family left Russia and arrived in Pocking, Germany, there too, he continued his diligence in learning and chassidishe behavior.

In 5711/1951, after a few years in the yeshiva in Brunoy, France the family left to Montreal, where Aizik spent the next six years learning b’hasmodoh. Then, in 5716/1955 – still unmarried – he was appointed mashgiach in the yeshiva. In a letter to the hanholoh of the yeshiva on 28 Cheshvan, the Rebbe asks to be notified that the appointment of the “young man Schwei” has brought about change – for the better – to the yeshiva. A while later he was appointed Rosh Yeshiva – a position he held until his passing 32 years and thousands of talmidim later. Besides for his vast knowledge in shas and poskim, he was also known as a great baal eitzoh, with many of the local baaleibatim coming to seek his advice on matters affecting their lives.

In 5718/1958 Reb Aizik married Golda Chanin, daughter of Reb Chaikel Chanin of Paris. The chuppah took place in front of 770 and the Rebbe was their mesader kiddushin. Together they built a home dedicated to Torah and shlichus. Rebbetzin Schwei was very active in Nshei Chabad. She and her husband founded Montreal’s Brides and Grooms,” an organization that’s active in teaching as well as spreading awareness about taharas hamishpochoh, and is active until today. Reb Aizik’s greatness in Torah didn’t keep him from being active in many activities with the youth of Montreal, including mesibos Shabbos, day camp, and more. He also was among the founders of Tzach in Montreal, as well as Beis Rivkah.

Upon the Rebbe’s instructions, Reb Aikzik joined the Montreal Vaad Ha’Ir and was among the most respected rabbonim there. All difficult halachic issues were brought to him. He used his position to make public the Rebbe’s opinion on important issues such as mihu Yehudi and the prohibition against giving land from Eretz Yisroel to the goyim, based on Shulchan Aruch Orach Chaim siman 329. He also was active in assisting his daughter and son-in-law in their shlichus in Colombia – especially in the realm of mikvaos.

Besides for his greatness in Torah and outstanding midos and understanding, Reb Aizik was also a great medakdek b’mitzvos –  without people noticing: “ohn blittos.“ And so it was in everything he did, in a simple and humble manner, without making much to do about himself.

Reb Aizik, unfortunately, got sick and suffered greatly, but he accepted his lot with love. He passed away on Erev Shabbos, 26 Iyar, 5748/1988 at the age of 55. His levaya took place that day, and he was interred at the Old Montefiore Cemetery, next to the ohel. Thus ended 55 years of shlichus on this earth. 26 Iyar is also the yahrtzeit of Reb Aizel Homler….

He was survived by his Rebbetzin, who passed away in 5776/2016, as well as by his daughter Mrs. Rivkah Rosenfeld, shlucha in Bogota, Colombia, and Mrs. Chana Sarah Spalter of Crown Heights. His older brother Reb Boruch Sholom raised a chassidishe family in Crown Heights and passed away in 5734/1974. Reb Aizik’s writings were compiled and edited by his brother, יבלחט”א Rav Ahron Yakov Schwei, and were posthumously published by Kehos as “כתבי ר’ אייזיק“.