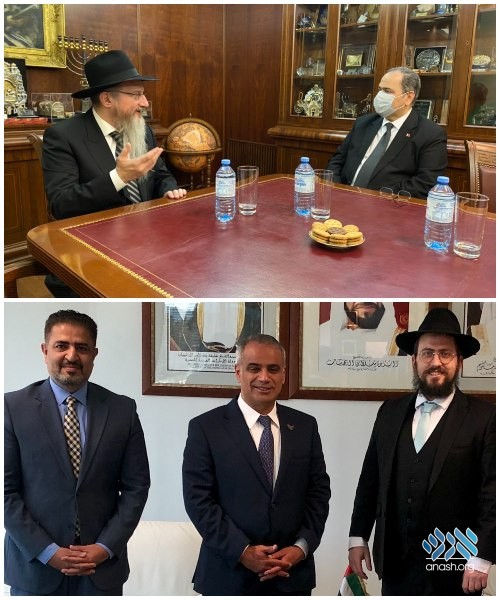 Hours after the historic peace agreement between Israel and the UEA was signing in Washington, DC, Rabbi Berel Lazar and Shmueli Feldman met with Bahrani and Emirati Ambassadors for a lengthy discussion on important issues.

Hours after the historic peace agreement between Israel and the United Arab Emirates was signing in Washington, DC, Chief Rabbi of Russia Rabbi Berel Lazar met with Ahmed Abdulrahman Al Saati Bahrain’s Ambassador to the Russian Federation for a lengthy discussion on important issues.

This meeting follows another recent meeting with a senior delegation from Bahrain met with Rabbi Berel Lazar, where they discussed the state of affairs of the Jewish community in Bahrain and about the prospects for the development a Jewish life in the Gulf kingdom.

Chairman of Chabad in Australia’s capital Canberra, Rabbi Shmueli Feldman, together with Rebbetzin Chasia Feldman, Principal of the Canberra Jewish School, also paid an official visit to the UAE Embassy in Australia following the historic accords.

Rabbi and Rebbetzin Feldman were greeted by UAE Ambassador to Australia, His Excellency Abdulla Al Subousi, together with senior diplomats at the embassy and shared a lengthy and friendly discussion followed by a presentation ceremony.

Rabbi and Rebbetzin Feldman presented the ambassador with a tray filled with small honey cakes prepared by the children of Canberra Jewish school. It is traditional to partake in sweet foods as part of the Rosh Hashana celebrations. The Jewish new year of 5781 starts with the Holiday of Rosh Hashana this weekend.

The group held discussions regarding the importance and ramifications of the historic day, including the announcement by the UAE that hotels in the Emirates will soon offer Kosher food to their guests.

During the presentation, the Rabbi sounded the Shofar and gave a blessing to the UAE diplomats, the people of the UAE, Bahrain, and Israel, and the leadership of the UAE, for making the bold move of formal peace with Israel and prayed that all mankind should benefit from this new beginning for generations to come.

Chabad ACT and the UAE Embassy in Australia have enjoyed a friendly relationship in recent years. In the last year, the UAE Embassy participated in the annual Chanukah event organized by Chabad ACT in the ACT Parliament, and Rabbi Feldman gave a keynote address at the International Tolerance Day event at the UAE Embassy.