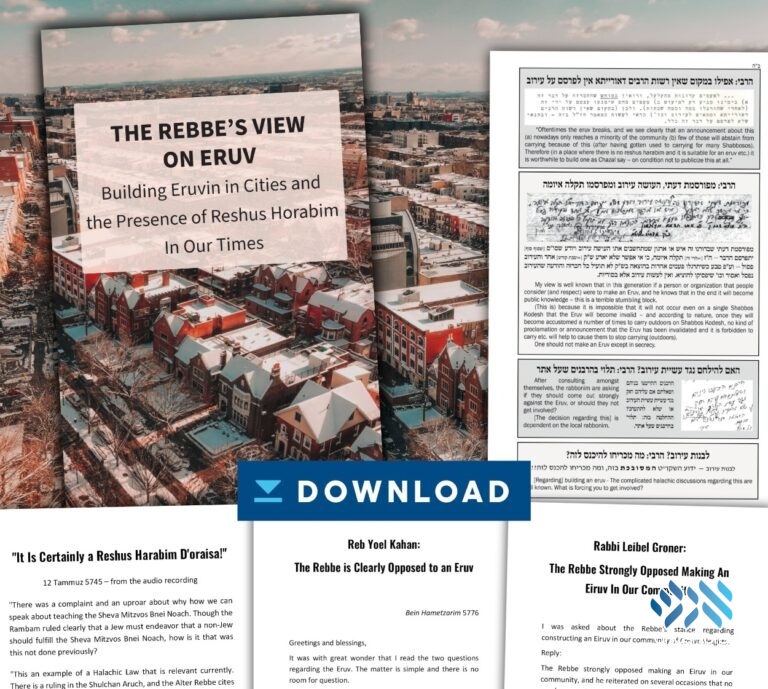 In a newly published English essay, Rabbi Shmuel Zajac explains in simple terms why the Rebbe was opposed to city eruvin in general and the impossibility of an eruv in a reshus horabim such as New York City.

For decades, the practice of anash in Crown Heights, which was upheld by the rabbonim there, was not to construct an eruv there, and anash around the world knew that the Rebbe was not supportive of eruvin in cities. This was verified by multiple firsthand accounts, as well as written responses.

Some weeks ago, Rabbi Shmuel Zajac, published a new booklet to clarify the matter and clear up some misconceptions. A well-known talmid chochom, Maggid Shiur in the Morristown yeshiva, author, and an expert on eruvin, particularly the Rebbeim’s opinions, Rabbi Zajac published five lengthy essays on the Rebbeim’s position on eruv.

However, unlike his earlier booklets which were geared toward talmidei chachomim, the most recent booklet was written in an easy-to-follow style and the Rebbe’s stance was clearly presented. For those unable to read the full essay, a summary of key points was printed at the beginning of the booklet. Now, that essay is being published in English.

A recently discovered letter has shed further light on the Rebbe’s stance on Shabbos eruvin in cities.

In this letter, the Rebbe expresses his view that:

As a result of this letter, the advocates for carrying with an eruv were at loss, as the Rebbe’s disapproval of eruvin is clear. To this end, a certain eruv proponent published an essay dismissing any contradiction to his pro-eruv view and claiming that, on the contrary, it is a “great mitzva” to construct city eruvin.

Lest there be any doubt, let us address the most outrageous of the claims:

Firstly, this eruv proponent repeatedly quotes from Shulchan Aruch that “it is a mitzva to pursue [the construction of] eruvin”.[2] To set the record clear, this quote from Shulchan Aruch is quoted out of context. The source is discussing a different sort of eruv; namely, courtyard and shared eruv chatzeiros. This source does not at all relate to putting up walls or polls — that is an entirely different topic.

Furthermore, the entire basis for the mitzva of eruv is not, as he claims, for the purpose of oneg Shabbos, but to prevent the transgression of carrying. Therefore, if there is any concern that the eruv could cause Shabbos transgression, there would not be any mitzva, and moreover, it should be avoided.

This is why, throughout the decades, the Rebbe neither pursued, nor encouraged of his own accord, the construction of eruvin (despite their claim that constructing eruvin is a ‘great mitzva’). In fact, across the Rebbe’s letters and responsa, there were no instances of the Rebbe pursuing the construction of an eruv. Despite countless opportunities to do so, there were never any directives from the Rebbe, or instances where the Rebbe instructed any of the numerous Chabad Chassidim, Shluchim, or Rabbonim to construct an eruv in their cities.

All the above doesn’t even mention the most salient aspect:

Throughout all those decades of leadership, an eruv was never constructed in the Rebbe’s own Shchuna — Crown Heights itself. Of course, if the Rebbe wished an eruv in Crown Heights, it would certainly have been built. Above all else, there are countless testimonies from numerous Chassidim, Rabbonim, and Shluchim that the Rebbe instructed them explicitly not to build an eruv in their cities!

Another claim put forth by eruv proponents is that due to the resilience of modern materials used in contemporary eruv construction, the eruv never becomes invalid. This is, however, factually incorrect. Experts, who check eruvin in US cities, have attested to me personally that even modern-day eruvin are often damaged and invalid. This fact is quite evident by the large budgets accrued for eruv inspection and maintenance.

The next claim is that even if the eruv is damaged, nonetheless, a weekly inspection and quick repair can fix it before Shabbos. But, what assurances are there that eruv damages will only occur ‘conveniently’ in the middle of the week, so that it can be caught and remedied in time? Realistically, an eruv can sustain damage shortly before Shabbos, such that any attempted repair would be impossible to complete. Indeed, any assertion that damage can “always be repaired in time,” only adds concern on the standard of repair.

Moreover, in the scenario that the eruv breaks on Shabbos itself (which is not at all unlikely), how will every single community member — all of whom are relying on the eruv to save them from a severe Shabbos transgression —be immediately notified?As the Rebbe indicated in a letter to the Jewish community of Melbourne, “It is impossible that there won’t be a Shabbos when the eruv won’t be invalid.”

This dual nature of eruvin — that it can both prevent and, ch”v, cause severe transgression — explains the Rebbe’s directive that “those Rabbonim who are familiar with local conditions should decide which factor should supersede.”

At the same time, in a place with an established eruv, the responsibility exists to ensure, as best one can, that the eruv remains kosher, to save those using it from chilul Shabbos. Nevertheless, a Chossid ought not to rely on the eruv due to the risk of transgression.

All the above is discussing a city with a population of less than 600,000, and it is not a reshus horabim, and it is therefore possible to construct an eruv there. In a city that does have 600,000, it is a de facto reshus horabim mid’oraisa, within which an eruv constructed with poles and strings (tzuras hapesach) is of no value at all. For carrying to be permitted, such a locale would have to be completely walled off with a gate that is closed nightly!

Those who do wish to rely on an eruv in densely populated areas argue that a reshus horabim requires a single street with 600,000 or more daily passers-by.

Such a definition, however, is instantly refuted by the Alter Rebbe’s rulings on eruvin: “a large city which contains 600,000 inhabitants,”[3] “to a city … within which 600,000 individuals pass.”[4] Furthermore, the Alter Rebbe qualifies that the Jews’ desert encampments were considered an absolute reshus horabim — i.e. they fulfilled all conditions to be considered as such according to Torah law — despite the fact that no single path in the encampment had 600,000 daily passers-by.[5]

Similarly, from the Rebbe’s phrasing (in the recently discovered letter) that an eruv can be constructed “in a locale absent of a reshus horabim mid’oraisa,” it is clear such a reshus horabim is a common, present-day reality. To suggest that the Rebbe was referring to Tokyo, Japan (as one eruv proponent suggested), far removed from where most Jewish communities reside, is absurd.

Furthermore, in a letter to Rabbi Eisenshtat regarding an eruv in Manhattan, the Rebbe clearly stipulates that if not for the barriers at the island’s tollbooths, Manhattan would have been considered a true reshus horabim — despite the lack of individual streets with 600,000 daily passers-by.

Of particular note, the Rebbe once addressed those claiming there is no present-day concern of reshus horabim and quote the Shulchan Aruch that “we do not have true reshus horabim in our time.” The Rebbe then dismissed this, pointing out the reality that times have changed and there are numerous areas nowadays with populations far exceeding 600,000 inhabitants, easily qualifying as true reshus horabim.[6]

Finally, to address the suggestion from some eruv proponents who quote the Tashbatz – that “one who’s heart is faint [regarding eruvin] … has been influenced by heresy” – as a means of casting aspersions on those sincere, G-d fearing Jews who have genuine concerns about the issues with city eruvin, is a blatant and appalling misrepresentation! The Tashbatz was referring to those who take issue with the enactment of an eruv as a halachic ruling, not about someone who holds that a particular eruv is halachically invalid.

From the Rebbe’s acknowledgment of contemporary reshus horabim, it is obvious that they are a common, present-day reality — and that it depends on the city’s total population count exceeding 600,000, rather than a specific street’s daily passersby count. Declaring that “according to the Alter Rebbe there is no reshus horabim” is a perversion of the truth.

It’s shocking that individuals who aren’t expert Poskim, and therefore unfit to rule on such weighty matters, permit themselves to be lax about severe Shabbos transgressions, especially after numerous proofs are presented to the contrary. It is appalling that even after their mistake was pointed out, they stubbornly cling to their claims, ignoring all evidence to the contrary, and making as if the issues with the eruv are contrived!

We hope and pray that those who are misguided in this matter should not be embarrassed to concede to the Rebbe’s view that full reshus horabim domains are a common reality, in which case the use of a string and pole eruv is invalid.

In the merit of strengthening our Shabbos observance, may we merit the true and complete Geulah.

[1] The exception being those eruvin constructed — discretely and without publicizing — as a last-resort failsafe against transgressing the prohibition of carrying on Shabbos.