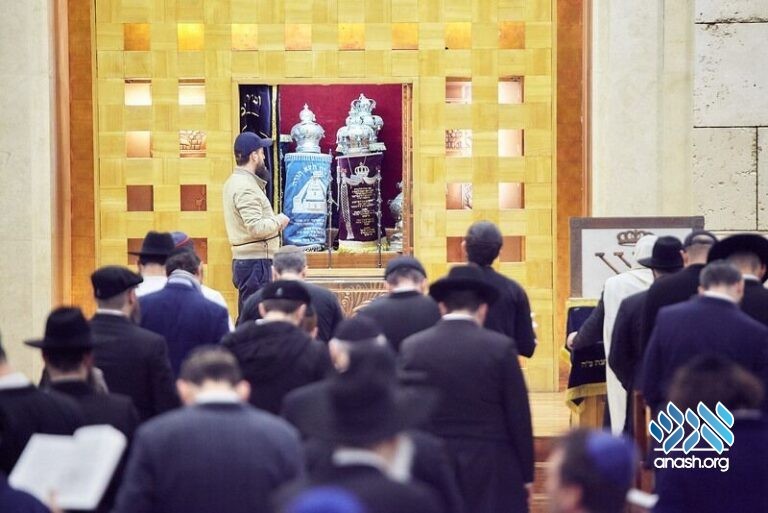 Are you familiar with all the laws and customs of the week of Selichos and Erev Rosh Hashana? Read this comprehensive guide by Rabbi Shmuel Lesches, Rov of Young Yeshivah Shul in Melbourne, Australia.

The following is a Halacha guide compiled by Rabbi Shmuel Lesches, Rov of Young Yeshivah Shul in Melbourne, Australia.

[Please be advised that all times listed here are only for Melbourne, Australia. Please see your local calendar for proper times in your location.]

The Tochecha is read more quietly and quickly than usual. Obviously, one must still hear every single word clearly. The Baal Koreh receives this Aliyah and recites the Brochos before and after. He is not formally called up to the Torah, but he may receive a Mi Sheberach after.

A Farbrengen is conducted on Shabbos afternoon, as well as prior to Selichos.

Shabbos clothing is worn to Selichos.

Selichos starts immediately after Chatzos (12:21am).

The Chazzan dons a Tallis without a Brocho.

From Monday onwards, Selichos is said before davening. We are not particular to recite it before dawn. However, it is appropriate to rise earlier for Selichos instead of postponing davening.

Brochos is said before Selichos, even before dawn (presuming that one slept at night).

One should prepare for Selichos by learning (at least one idea from) the Maamar printed at the front of Selichos. Tzedakah should also be given right before Selichos.

It is customary to stand for the entire Selichos. [An infirm person may sit. If possible, he should at least stand for each recitation of E-l Melech Yoishev and Hashem Hashem, as well as Ashamnu.]

Ideally, Ashrei should begin only after a Minyan has gathered. However, if Selichos began without ten people, and a Minyan eventually forms, Chatzi Kaddish may be recited at that time. [The Chazzan should recite several Pesukim beforehand.]

A person who davens without a Minyan should omit the Yud-Gimel Midos-Harachamim. Some maintain that Machei u’Masei and Moron D’vishmaya (end of Selichos) should also be omitted.

If a Chosson is present at Selichos, Ashamnu is omitted. The same applies if one of the Balei Habris are present, provided that it is after dawn.

If there is no longer a Minyan remaining at the end of Selichos, Kaddish Tiskabel is still recited, as long as six people still remain. [Obviously, it is forbidden to abandon a Minyan before the end.]

As on every Shabbos Mevorchim, the entire Tehillim is recited before davening.

We don’t bentch the new month before Musaf, and Av Harachamim is recited. The Baal Shem Tov explains that Hashem himself bentches the month of Tishrei, and with this power we bentch the other months of the year.

A Farbrengen is conducted after davening in honour of Shabbos Mevorchim.

Selichos is longer than usual and one should plan his morning accordingly.

During Selichos, Ashamnu is recited even after daybreak, unless a Chosson is present. After Selichos, Tachnun is not recited for the remainder of the day.

The Shofar is not sounded. [A Baal Tokeiah who still needs to practice for Rosh Hashana may do so in a secluded area. However, it is far more preferable to practice in the days prior, instead of on Erev Rosh Hashana.]

Hataras Nedarim is performed by all males over the age of Bar Mitzvah, in the presence of a full Minyan. [If this is not possible, one may recite Hataras Nedarim in front of three men or boys over the age of Bar Mitzvah. There is a debate as to whether Hataras Nedarim can be performed via a Shliach, letter, phone call or Zoom, and this may be relied upon when there is no other choice. Nevertheless, even according to the lenient opinion, this is valid only when the three men serving as Dayanim are physically present together.]

One should stand when reciting Hataras Nedarim, whereas everyone else sits.

The text of Hataras Nedarim in the Siddur is effective only for those vows or positive practices that one no longer remembers. Any vow or positive practice that one remembers must be presented (not necessarily on Erev Rosh Hashana) before a Beis Din of three, of whom at least one is well-versed in the laws of Nedarim.

A “positive practice” requires Hataras Nedarim if it was observed:

🙝 Pruzbul
5782 is a Shemittah year. Outstanding debts become void due to Shemittah unless the creditor performs a Pruzbul, thereby remitting all loans to a Beis Din.

One should perform a Pruzbul even if he does not specifically remember having provided any loans.

The Rebbe advised further that, for practical purposes, the Pruzbul should be performed immediately following one’s recitation of Hataras Nedarim, in the presence of the Beis Din before whom he annulled his vows.

One who forgot to perform the Pruzbul after Hataras Nedarim may recite it before three men any time before Rosh Hashana.

The Pruzbul is customarily performed by making the following verbal declaration in the presence of at least three men:

One should stand when reciting the Pruzbul, whereas the Beis Din sits.

A Pruzbul may also be performed by completing and signing a written document (see below). This is beneficial in a number of circumstances, such as:

Due to the preciousness of Pruzbul, the Rebbe suggested that it is worthy to lend some money before Shemittah, so that the Pruzbul will be of practical consequence. [There are many determinants influencing which debts are cancelled by Shemittah, and which are not. It would seem best to accomplish the Rebbe’s directive by lending a nominal amount before performing the Pruzbul. The creditor should not accept any collateral. The loan should be made due on a date before the beginning of Shemittah, so that it is outstanding by the time Shemittah begins, and collected after Shemittah ends.]

If one did not manage to perform the Pruzbul before Rosh Hashana, he may rely on the Pruzbul which will be performed at the end of the Shemittah year, i.e. next Erev Rosh Hashana.

[Even if one will forget to perform a Pruzbul altogether, he may rely on those opinions who allow loans to be collected after Shemittah, on the basis that there is an assumed understanding (akin to a properly formulated stipulation) that the loan will be repaid even after Shemittah.]

One writes and sends a Pan on behalf of himself and his family. Those within proximity visit the Ohel.

One should remember to prepare: Round Challos, sweet apples, honey, new fruits, pomegranates, Tzimmes, head of a ram or fish, meat, sweet foods and drinks.

On Rosh Hashana, it is customary not to eat any foods that are perceptibly bitter, sour, overly sharp, vinegary, or that contain nuts.

One should ensure that the pages of a newly purchased Machzor aren’t attached to each other (due to being uncut), as it is prohibited to separate them on Rosh Hashana.

One should take a haircut, bathe and cut one’s nails, as necessary.On Erev Rosh Hashana, one should not donate blood or undergo any procedures or tests involving blood loss. [This does not apply in cases of great need, and certainly not when it is Pikuach Nefesh.]

Prior to every Yom Tov, the Rebbe emphasized that the Yom Tov requirements of the needy be met. (Online donations for Melbourne can be made at http://mjcf.com.au.) Yom Tov is also an especially appropriate time to host guests. The Chazanim should familiarize themselves in advance with the meaning of all of the Piyuttim and Tefillos – even if they already did so the previous year. Similarly, one should train his children regarding the order of davening beforehand, so as to minimize any distractions during davening.

On Erev Rosh Hashana, one should reflect and take stock of the entire year, making all necessary corrections and utilizing the opportunity for Teshuvah.

It is a Mitzvah to immerse in a Mikvah on Erev Rosh Hashana after midday.

One should utilize all spare time on Erev Rosh Hashana to recite Tehillim, especially from one hour before Mincha and onwards.

It is customary adopt a new Hiddur Mitzvah. This should be done on Erev Rosh Hashana, or on Rosh Hashana. [One should state that his acceptance is Bli Neder.]

Just like on Erev Shabbos, it is preferable to refrain from eating a proper meal once the tenth Halachic hour of the day begins (3:10pm), in order to properly enjoy the Yom Tov meal at night. However, one may snack in small quantities.

Prior to candle-lighting, one should give Tzedakah for the two days of Yom Tov.

One should arrange a pre-existing flame with which to light the candles on the second night of Rosh Hashana.

If eating out, one should ensure that practical benefit is derived from the candles after Yom Tov begins.

Mincha is davened at greater length than usual, as it is the last Tefillah of the year.