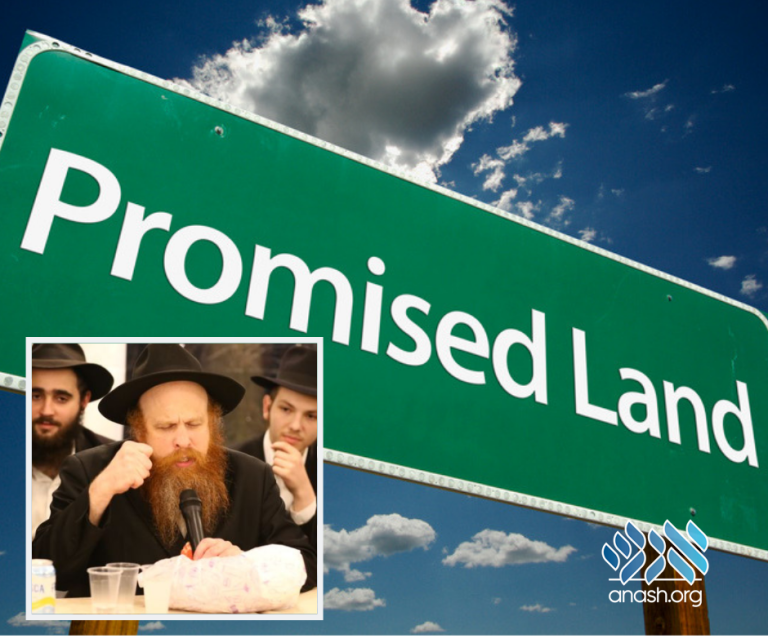 What was the mistake of the meraglim, and how can we avoid falling into the same trap? Rabbi Akiva Wagner shares an inspiring and practical message.

Rabbi Avrohom Aaron Price was an accomplished talmid chochom, a gaon and an author of numerous seforim, and a leading Rov in Toronto for many years. [In Igros kodesh chelek yud aleph there is a letter of the Rebbe to him, in which he also writes ha’oros on his seforim].

He was originally a Poylishe Chassid who emigrated to Toronto in 1937. Rabbi Price had a deep respect for the Rebbe which is illustrated in the following anecdote.

Once there was an issue with a man who refused to give his wife a get. Rabbi Price was one of the leading Rabbonim involved. One of the other Rabbonim suggested a certain way of disqualifying the kidushin and, thus, freeing the woman. Rabbi Price rejected that suggestion, and countered it with his own suggestion. “Write to the Lubavitcher Rebbe,” he said, “and ask him to free her with the (only) other means available. If R’ Akiva Eiger was able to do it, then we can be certain that the Lubavitcher Rebbe is able to as well.”

Once, the Rashag was in Toronto on a fundraising trip. The Rashag’s method of fundraising did not involve travelling around to people. Instead, he would stay in his hotel and make appointments for people to come there to see him. Any anash who were able would bring philanthropists and donors to see him as well.

During this particular stay, Rabbi Price came to the hotel to meet with him. During their conversation, Rabbi Price (who also had an acute business sense, and was a wealthy man in his own right) told the Rashag that it was not fitting for him to have to travel around from place to place to solicit funds. Instead, he suggested a way through which the Yeshiva could become self-sufficient. “The Yeshiva should purchase a chain of theatres,” he suggested, “and it will be able to support itself with the revenue”.

The Rashag retorted: “Eitzos hobben mir bei vemmen tzu freggen! Efsher kent ihr mir brengen a pohr balei batim?” [For advice, we have whom to consult with! What is needed from you is to set up meetings for me with some wealthy donors].

The Rebbe explains that certainly, at the time of their being sent, they had no evil schemes in mind. They did not dream, at that time, of the terrible betrayal that they would later carry out. What they were, however, guilty of, and the way in which they were already deviating ever so slightly from their mission, was in the fact that they were preparing to offer “eitzos”.

This is what Chazal mean by saying that they were going בעצה רעה; what was bad, what was wrong, was the mere fact that they saw their position as one of offering advice. For in fact (as the Rashag said to Rabbi Price) they were not needed for their ideas and strategies. For eitzos, we had who to turn to- Moshe Rabbenu, who conveyed the word of Hashem directly. Their mission was exclusively fact-finding. They were to bring back information, not to interpret or draw conclusions from it.

So, although this in itself was not sinful, it was enough cause for Moshe to daven that Yehoshua avoid even that subtle deviation. When you are called upon to produce facts, to give over the information as it is, then mixing your ideas and perspective is עצה רעה, it is not purely good. In fact, it was this very subtle deviation from the narrow definition of their mission that ultimately became the cause of their going astray in such a drastic and unexpected manner, with the subsequent tragic results.

We are all meraglim. We are here in the world as foreign agents, to conquer, subjugate and transform. We have very clear instructions and directives, regarding what exactly we are meant to achieve, what results we are seeking. But we are not needed for our analysis and strategic input regarding what will or won’t work. While we are supposed to use our intellect to figure out how to best fulfill our directives, we do not need to find new strategies for achieving the end results. In fact, engaging in offering “eitzos” will ultimately lead to “eitzoh ro’oh,” to negative and inappropriate conclusions.

A certain well known Jewish celebrity, a singer and musician, was once in yechidus. There, he complained to the Rebbe (about the halachic restrictions regarding the manner in which he conducts his concerts), saying “When I make a concert that is held according to the strict interpretation of halacha, with separate seating etc., I attract a very small crowd. But when I make the concert with a bit more flexibility, the attendance increases tenfold, and I am able to influence so many more Jews in Torah and Mitzvos.”

The Rebbe, however, rejected his position, and wouldn’t condone his behavior.

This particular celebrity did, in fact, have numerous baalei teshuva to his credit, many who were, in fact, influenced by his concerts. Rationally, his argument seems to make a lot of sense. After all, he was doing Hashem’s work, bringing Jews closer to Him. Doesn’t it make sense that he should be looking for the most effective way to do this? Shouldn’t the criteria be what will bring about the best results?

But, of course, he was wrong. Just as the meraglim were wrong. If it were up to him to strategize, to figure out the best way to achieve the final goal, that would be another thing. The reality is, we are mere soldiers. We have to use our intellect to figure how to best carry out our orders. It is up to our generals, our commander, to figure out how to win the war.

And, while in that case, it is easier to see where he went wrong, since he strayed away from halacha, the error can be in many forms that are often more subtle.

A bochur once wrote a letter to the Rebbe, in which he described his daily schedule. This bochur had discovered the tremendous benefit of learning Torah during the night-time hours, when there are no distractions and when it is easier to accomplish more in learning (as Chazal say לא איברי לילה אלא לגירסא). Thus – he wrote to the Rebbe – he began a schedule of learning many hours throughout the night, and making up for it by sleeping more hours during the day.

This schedule met with great success for him, and he managed to complete a number of mesechtos, and accomplish much in his learning. He concluded by writing to the Rebbe that he intends to continue in his successful learning arrangement, to go further in this “derech” that he had found for himself.

The response of the Rebbe was one word: Where the bochur wrote that he intends to continue following this derech, the Rebbe made an arrow to the side of the page, and wrote “לתהום”! [Implying that this path would lead him to great depths, to fall, rather than to great heights].

Once again, logically, the bochur seemed to have a good plan. This approach, particularly, seemed to be bringing him the intended results. Still, he was (as we can see from the Rebbs’s response) very wrong. It was not his job to strategize, to figure out how to finish numerous mesechtos, as much as it was his responsibility to know what he is meant to do, which is to be actively involved in learning Torah within a designated structure.

To be sure, it is often a fine line. We are supposed to use our own understanding to figure out the best way to carry out Hashem’s directives. We have to strategize, to figure how to overcome the challenges that come our way, and how to avoid unnecessary difficulties. [Especially now, as the summer begins, and many bochurim are leaving the structure and environment of Yeshiva to engage in various types of shlichus, it is crucial that everyone have a strategy and a game plan for how to avoid the various yetzer horas – that are especially prevalent in the summer months – in matters of sur meira, and how to maximize their usage of the time in continuing to grow in Torah and davening, in areas of aseh tov].

But there is a certain line we cross when we change from figuring out how to perform our shlichus, to carry out our instructions meticulously, to finding a better way to reach the final goal. This is the beginning of “eitzah ro’oh.”

There are countless examples of this. How many times do we hear bochurim (or young yungeleit) insisting that it can’t be that the limitation of four l’chayims applies to them because “I know myself, and I know that a mere 4 l’chayims will have no effect on me at all, and, therefore, will not achieve the goal”.

But wait! Who told you the goal is to have an “effect” on you, or what that effect should be? Who told you to find ways to reach the goal? There is a directive from the Rebbe to hold a chassidishe farbrengen and to say l’chayim, so you participate in a farbrengen and say l’chayim, strictly according to your instructions. It is not your job to seek eitzos, to find better ways to achieve the results. Your job is only to be meticulous in carrying out the directives themselves.

Of course, this is a challenge. Because the objective of a farbrengen seems to be to address our feelings, our inspiration and excitement, the point of saying l’chayim seems to be to somehow awaken us and jolt us. It seems logical that we should be focusing on how the farbrengen and the l’chayim would be most effective.

This was precisely the challenge of the meraglim as well. After all, the objective of meraglim, too, is to figure out, to use intellect to determine the best way to conquer the land. Yet, when they crossed the line from figuring out what their instructions were to applying their own ideas and eitzos, that was the beginning of their downfall.

It is Shabbos mevorchim Tammuz, and every single chosid is looking for what is appropriate to do to prepare for the יום הגדול והנורא of Gimmel Tammuz. While there are many beautiful ideas, we have to remember to focus on what the Rebbe tells us to do. The Rebbe is clear and unambiguous, and by following his precise instructions, we are sure to strengthen our hiskashrus, bring the Rebbe nachas, and move closer to his final goal.

Eitzos hobben mir, BH, bei vemmen tzu freggen (BH, we have whom to turn to for advice). We need to turn to the Rebbe and get his eitzos and guidance and instructions, and let them be our sole compass. In this way we will correct and reverse the error of the meraglim, and hasten our return to Eretz Yisroel together with Moshiach tzidkeinu NOW!

L’chaim! May we all apply ourselves to our shlichus in strict compliance with the Rebbe’s exact directives to us, and this Gimmel Tamuz should not be, ch”v, a 25th hilula or anything of the sort, but, rather, a shturem’dige chag hageula which we will celebrate together with the Rebbe in the most literal sense with the immediate hisgalus of Moshiach Tzidkeinu NOW!!!