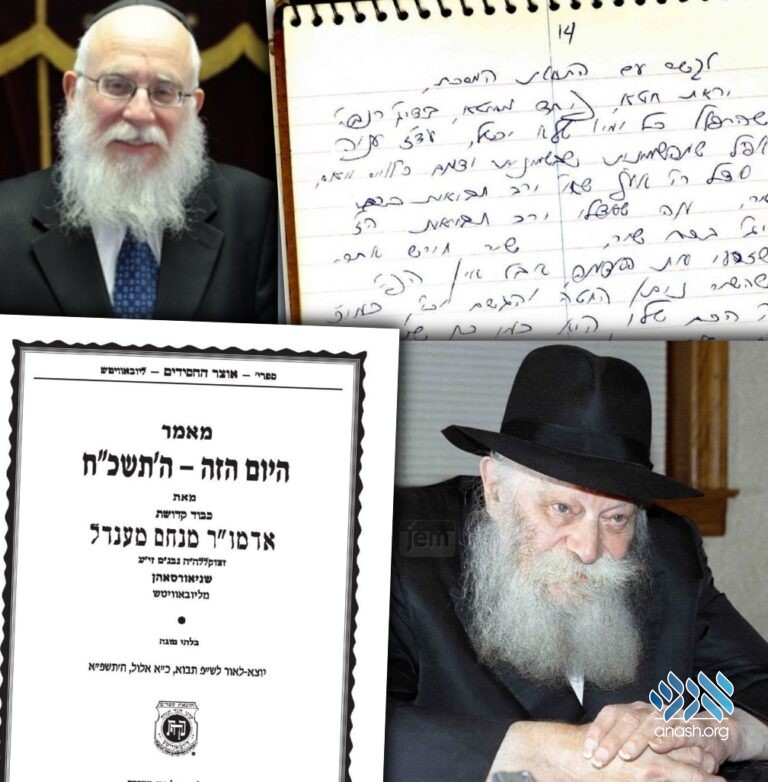 After hearing about a newly discovered ma’amar, Rabbi Aharon Goldstein of Ann Arbor, Michigan, was inspired to search in his attic. His efforts paid off, and the number of missing ma’amarim of the Rebbe was brought down to 37.

In honor of Chai Elul, Lahak released a newly discovered Maamar which lay hidden for 53 years, courtesy of an intense search in the home of Rabbi Aharon Goldstein.

Exactly one month ago, on the 18th of Av, Chabad Chassidim were saddened by the passing of Rabbi Shalom Jacobson, after a life of dedication to the Rebbe’s causes. During the Shiva, his family discovered several pages which piqued their interest, and they submitted them to Lahak Hanochos.

Upon inspection, those pages were discovered to be a hanacha — the only of its kind — of the Rebbe’s maamar “Hashomayim Kis’i” from the year 5728. The Chof years (1960s) are known as the “challenging years,” during which the transcription and publication of the Rebbe’s talks were not well documented and organized. With this discovery, Rabbi Jacobson — who had been a member of Otzar Hachassidim and a co-founder of Vaad L’hafotzas Sichos — merited to continue the publication and dissemination of the Rebbe’s Torah even after his passing.

Hearing about the discovery, Rabbi Aharon Goldstein of Chabad of Ann Arbor, Michigan, was inspired to, once again, search his home for lost Hanachos. Rabbi Goldstein was among the Bochurim at 770 who were accustomed to keep a written record of the Rebbe’s Sichos and Maamarim in a personal format. With exceptional diligence, he transcribed all the Farbrengens from 5727 until 5735! He has long submitted all of his transcripts to Lahak, serving as the basis of publication for many missing Farbrengens.

After much searching, in his attic he discovered several of his transcripts of the Rebbe’s Farbrengen on Shabbos Ki Savo 5728, including the Maamar. He sent it immediately to Lahak Hanochos, where they enthusiastically began to prepare it for publication, and managed to publish it just in time for Chai Elul this year.

Rabbi Chaim Shaul Brook, head of Lahak Hanachos, shared the following after the publication of the exciting news:

“During the years of the Rebbe’s leadership, he delivered an astounding 1,568 Maamarim! In the middle of the 1980s, when we began organizing and collecting the Rebbe’s Torah for publication in Toras Menachem, we discover that 478 Maamarim were missing (close to a third of the total number), whether because the Hanacha was never printed, never written, or recorded on a tape which was not easily available.

“With Hashem’s help, we managed to collect the vast majority of these missing transcripts. Through endless hours of work and huge sums of money, we published them. We also preserve and organize all the published Hanachos, so they can be easily and orderly accessed, something that had never been done previously.

“Over these years, we developed a list of all the individuals who were known to have a special koch in the Rebbe’s Sichos and who recorded or wrote down the Farbrengens, and worked diligently to contact each of them. Our staff traveled to continents far and wide to personally search attics and basements, and all sorts of nooks and crannies. Sometimes we found a reference or a lead about a farbrengen or Maamer there was no record of, in a small newspaper article in a non-Chabad newspaper that someone had filed or a in a letter that a guest at 770 sent to his friend, or that a Yeshiva student wrote to his parents, grandparents or a friend. Also, we found that, often, people didn’t appreciate the treasure they had hidden in their bookshelves and file boxes.

“There is no doubt in my mind that these two most recent discoveries, occurring within one month, are an expression of the Rebbe’s kindness to his Chassidim, so many years after Gimmel Tammuz. The main thing is that these Farbrengens and Mammorim should be studied again and again, giving the Rebbe true nachas,” he said.

However, the task is not complete, 37 Maamarim are still missing, as listed below. Lahak is calling on all members of Anash to do whatever is possible to ensure that every transcript and every recording be sent to Lahak so that the Rebbe’s Torah is preserved and can be studied by every Jew.

If  you have a diary or letters that were sent from 770 send them in . Please take time to go through your old files that may contain a transcript of the Rebbe’s Torah. Even if you are unsure of their value, send them to Lahak – [email protected]