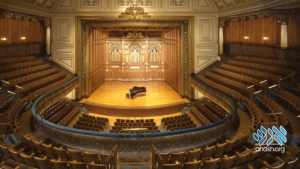 Following the recent message from Mordechai Ben David about the Rebbe’s unwavering view on concerts being kept separate, we bring you a response from the Rebbe regarding seating at shiurim and public events.

In an interview on Israeli website Kikar HaShabbat, MBD mentioned that some poskim – whose name he didn’t mention – hold that in a non-frum neighborhood it is allowed to have mixed seating at an event, though in a frum neighborhood, seating at concerts must be totally separate.

It is worth noting that on the subject of mechitzos at shiurim, the Rebbe held a higher standard than other respected authorities.

Rav Moshe Feinstein, in Igros Moshe Y”D vol. 2 siman 109, ruled that in a case of need it is permissible to hold shiurim for both men and women while they are seated mixed. The Rebbe – who as known refused to compromise for the sake of shlichus even on small details – insisted that there be a mechitza between the men and the women, and only in extenuating circumstances did the Rebbe allow for separate seating without a mechitza.

In a letter from 5739/1979, the Rebbe writes to Russian Mathematician Dr. Dovid Khazdan that generally speaking, Torah classes should be entirely separate, but in Communist Russia, they could allow separate seating without a mechitza.

The Rebbe emphasized that although the people attending the shiur would mingle on their own, this does not permit us to enable it. The only allowance for classes with separate seating without a mechitza, says the Rebbe, is to stem assimilation and intermarriage and only in countries where there is no other way to stop it. However, it should in no way serve as a heter to other places.

The following is the exact text of the Rebbe’s letter:

“There is a group of young women who would also like to learn Torah. Would it be permissible to admit them to men’s study classes, or should separate classes be formed for the women? In the latter case, would it be proper to have male instructors for them?

“In view of the extraordinary circumstances and difficulties in that country [Russia], I would be inclined to take a more lenient view to admit women into the men’s classes. However, in order to emphasize the exception due to extenuating circumstances, and also in order to be mindful of the din, two provisions should be made:

“One, to teach in a co-ed class such subjects that are incumbent also on women, such as the laws obligatory also for women (kashrus, laws of Shabbos and Yom Tov, etc.), and, of course, also the basics of our faith, love and fear of G-d, prayer, and the like—subjects that are dealt with in chassidus.

“Second, that separate seating should be arranged for men and women. This would preclude also other personal associations, such as mixed dancing, etc. Although we are speaking of persons who, by reason of background, are not otherwise averse to mixed dancing and socializing, it is obvious that this should not be permitted in these groups, and no heter should be given to such practices, explicit or implied.

“I must emphasize again that the heter mentioned above in regard to co-ed study is based on the special extenuating circumstances prevailing in that particular country, there being no other way to save them from assimilation and intermarriage. It should in no way serve as a precedent for other cases where those circumstances do not prevail, not continued even in that same case when the situation improves sufficiently not to have recourse to that heter.”