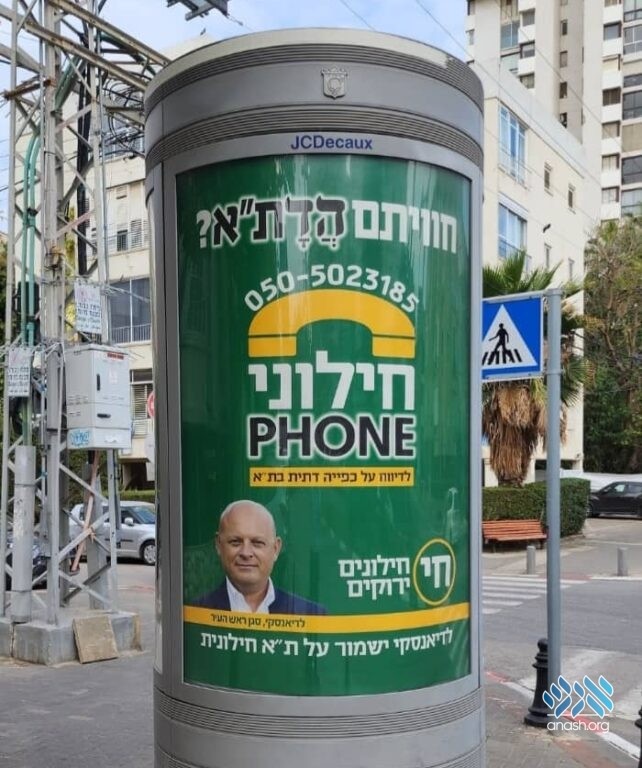 After complaining that Chabad’s public display of Yiddishkeit causes many to think that “Judaism = Chabad”, Tel Aviv’s Deputy Mayor Reuven Ladianski opened a new hotline to report on any “religionization.”

“Hello, I am calling to report an illegal menorah…”

Those are the types of calls that Tel Aviv’s Deputy Mayor Reuven Ladianski wants to receive on his new hotline, which he just set up for residents of his city to report on “hadata” – religionization.

The move came shortly after Chanukah, when Chabad set up nearly 100 public menorahs around Tel Aviv, bringing the light of Chanukah to tens of thousands, many of who would not have celebrated otherwise. The massive success of Mivtza Chanukah in the city, which is usually described as a bastion of secularism, did not sit well with certain crowds.

“How did Chabad take over Chanukah celebrations in Tel Aviv?” one headline asked, before complaining that “the Chabad movement has almost complete exclusivity over the lighting of menorahs in the public space of the city.”

Ladianski offered his two cents for that article as well, grumbling that thanks to the “menorahs on Chanukah, parades and concerts on Lag B’omer, events on Shavuos, tefillin stands throughout the year all around the city, and more, the impression is created that Judaism = Chabad.”

But instead of perhaps putting up his own menorahs, or setting up a tefillin stand of his own to counteract the one he disliked, the deputy mayor chose a different route. He created “Chiloni-Phone” (“secular phone”), a hotline to report on such shocking acts as the one enumerated above.

“Have you encountered hadata in education? Missionaries who coax your children at the entrance to their schools? Gender segregation in the public sphere? A ban on bringing chametz into a hospital [on Pesach]? Call us or send WhatsApp to ‘Chiloni-Phone’. Every request will be taken seriously,” said the announcement posted by the deputy mayor on his official website and on his Facebook page.

Previous such attempts, both in Tel Aviv and on a national level, only had a boomerang effect. In 2020, when Tel Aviv’s mayor Ron Huldai announced a ban on tefillin stands outside the city’s schools, thousands of men across Israel protested by laying tefillin, and some Tel Aviv students even opened their own tefillin stands in their schools. And when a rumor spread that a Knesset Member was advancing a bill that would criminalize bringing Jewish youth closer to Yiddishkeit, thousands showed up once again to protest by putting on tefillin with their local Chabad tefillin stand.

Now too, Chabad will once again pay no heed to yet another attempt, painful as it is, to stop the spread of Yiddishkeit in Eretz Yisroel. Their only response will be to double and re-double their activities, continuing to spread light in the face of darkness.