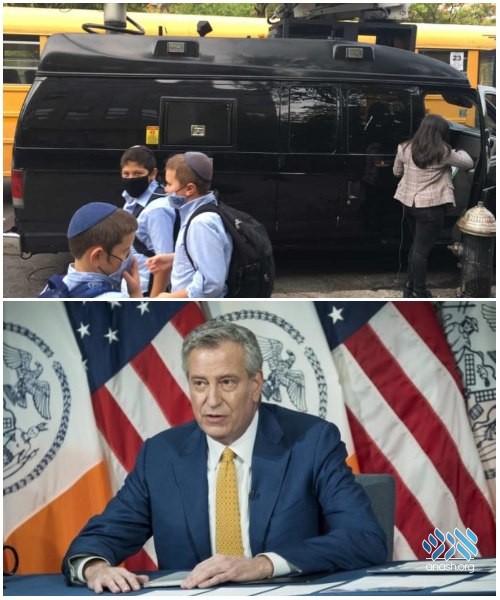 The Deblasio administration issued a notice to reporters that there will be regular inspections of all non-public schools in communities with clusters of cases. Crown Height is also being watched closely.

The DeBlasio administration issued a warning to the Jewish community Thursday afternoon, that if progress isn’t made in slowing the spread of infection by Monday evening, the city would be forced to take action.

In an email sent to reporters, Deblasio warned that beginning Friday, there will be regular inspections of all non-public schools in communities with a high percentage of cases and their adjacent zip codes. It is unclear whether the schools themselves also received this advanced warning.

True to form, media outlets showed up at several Brooklyn Yeshivas Friday morning including Lubavitch Yeshiva Ocean Parkway which is located in the COVID cluster area of Ocean Parkway.

New measures the city outlined include banning all gatherings of more than 10 people, issuing fines for not wearing a mask, closing all non-essential businesses, and ordering all yeshivas that do not meet the city’s arduous standards to close.

The Crown Heights community is being closely watched as well. A parent of a Yeshiva student in one of Crown Heights’ COVID designated dorms told Anash.org that he received a call from the New York Department of Health warning that the dorm where the students are quarantining has come under scrutiny and that they are aware of all comings and goings.

While the Crown Heights community isn’t yet considered a cluster, the Gedalia society has warned of several dozen new confirmed cases and many more suspected cases. It is important to keep in mind that it is up to us to make sure that our yeshivas and shuls don’t get closed a second time.