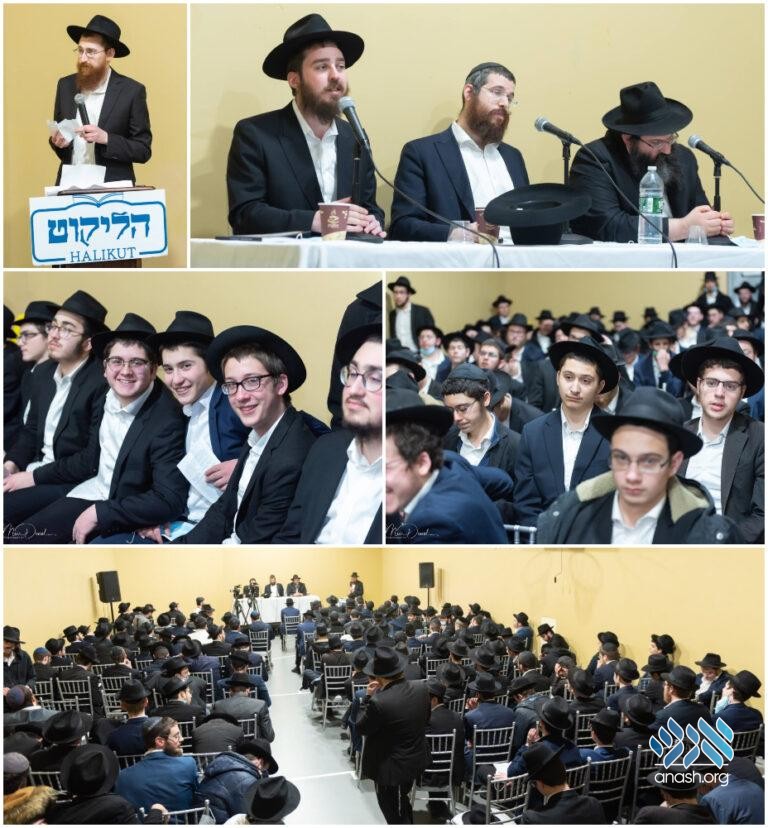 Bochurim attending the grand Halikut Siyum on Sunday were given the oppurtunity to ask mashpi’im anonymous questions on any topic of concern and interest to bochurim with no question off limits.

A first-of-its-kind crossfire panel at the grand Halikut Siyum on Sunday gave bochurim a chance to seek clarity by posing anonymous questions to a panel of mashpi’im.

The panelists for the crossfire were Rabbi Yossi Klyne of Baltimore, Rabbi Meir Chaim Posner of New Haven, and Rabbi Leima Wilhelm of Morristown and moderator was Rabbi Hertzel Pevzner. Bochurim were given an opportunity to submit questions anonymously, and organizers said that “no question was off-limits,”

“Seeking clarity is a basic human trait, and as such, everyone has questions they would love to be answered and concerns they wish to be cleared,” organizers said. “Often, however, the opportunity to ask does not present itself, or perhaps one is concerned about how they might be perceived by their peers.”

Halikut’s grand Siyum is a culmination of months of study by hundreds of bochurim across North America. After having completed Chelek Lamed in Likkutei Sichos, each bochur took three general tests. Those that passed were invited to the Siyum.

Earlier on Sunday, the 300 participants took the final test on the entire chelek of Likkutei Sichos. Following the test and the panel, the finalists will be tested on-stage to determine the winner for this year’s competition. The Siyum will then conclude with a banquet and the distribution of prizes.

Halikut is a program of Vaad Hatmimim under the direction of Rabbi Tzvi Hirsh Altein, and led by Tzvi Alperowitz, Boruch Ceitlin and Peretz Garelik. Thanks was given to Mendel Goldman for his help arranging the crossfire.

To support Halikut, and Vaad Hatimimim’s other programs, please go to TheBochurim.com – Please give, and give generously!