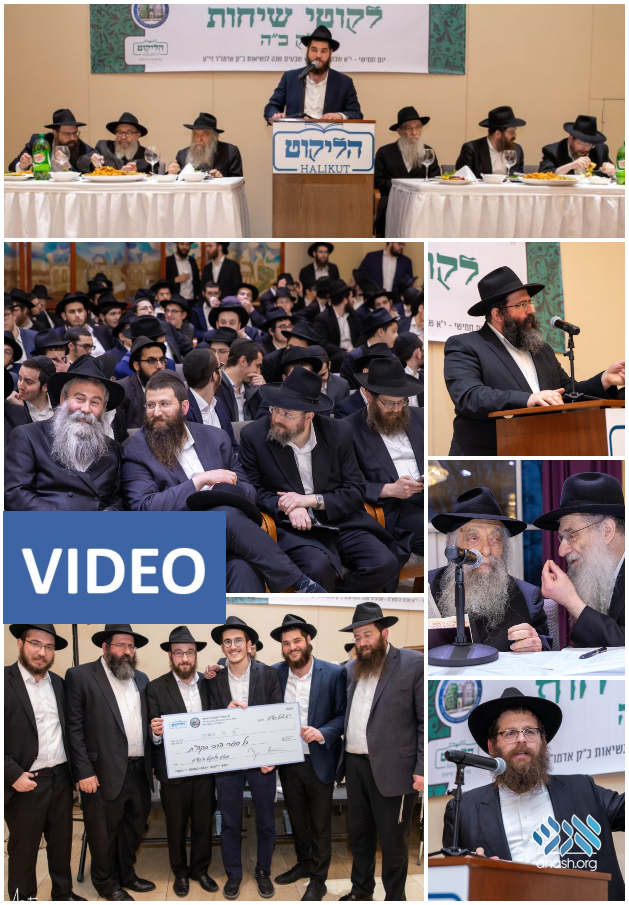 Halikut Siyum Gallery 3: A full day celebration concluded with a on-stage quiz for the finalists and a grand Siyum for all participants, with the grand winner receiving all the Rebbe’s seforim.

A full day of tests and programs ended off with a Chidon for those with the highest marks and a grand Siyum celebrating the achievements of all 230 bochurim who completed Likkutei Sichos Chelek Chof Hey.

The chidon was emceed by Rabbi Shmuli Avtzon and the questions were presented by the Rebbe’s chozrim – Rabbi Yoel Kahn, Rabbi Nachman Shapiro, and Rabbi Leibel Shapiro, while the crowd of hundreds watched spellbound.

The competition was won by Hatomim Levi Uminer of Baltimore Zal, who received the first place prize of all the Rebbe’s seforim in Kehos.

Following the chidon was the grand siyum, celebrating the months of learning by all participants. A fully-catered meal was served and the bochurim heard from Reb Yoel, Rabbi Leima Wilhelm of Morristown Yeshiva and Rabbi Eli Nosson Silverberg of Chicago Mesivta.

During the siyum the bochurim were shown a video that had been made especially for the event. Entitled ‘A Cherished Connection’ the video showed the great nachas ruach the Rebbe received from those who learned Likkutei Sichos.

The siyum was followed by spirited dancing after which each bochur was presented with a certificate and a gift card for hundreds of dollars at Kehos, in recognition of their hard work.

Thanks were given to Halikut’s generous donors, Moshe Klein, Hillel Dovid Krinsky, Sholom Laine, Yossi Katz, Keren Meromim, and an anonymous donor, and to Rabbi Moshe Kotlarsky for all his assistance.

Thanks were also given to the Vaad Hatmimim led with dedication by Rabbi Tzvi Hirsh Altein, together with Halikut’s organizers Tzvi Alperowitz, Boruch Ceitlin and Peretz Garelik.

A special thank you was expressed to Rabbi Yosef Geisinsky of Great Neck and the Chabad house team led by Rachel Sellem, for hosting the Siyum and to Mendel Goldman and Shneur Itzinger for their countless hours of extraordinary work.

Halikut program is a project of Vaad Talmidei Hatmimim, in collaboration with the hanhalos and shluchim of the participating yeshivos.

Video: ‘A Cherished Connection’ – The Rebbe’s nachas ruach from learning his Sichos.