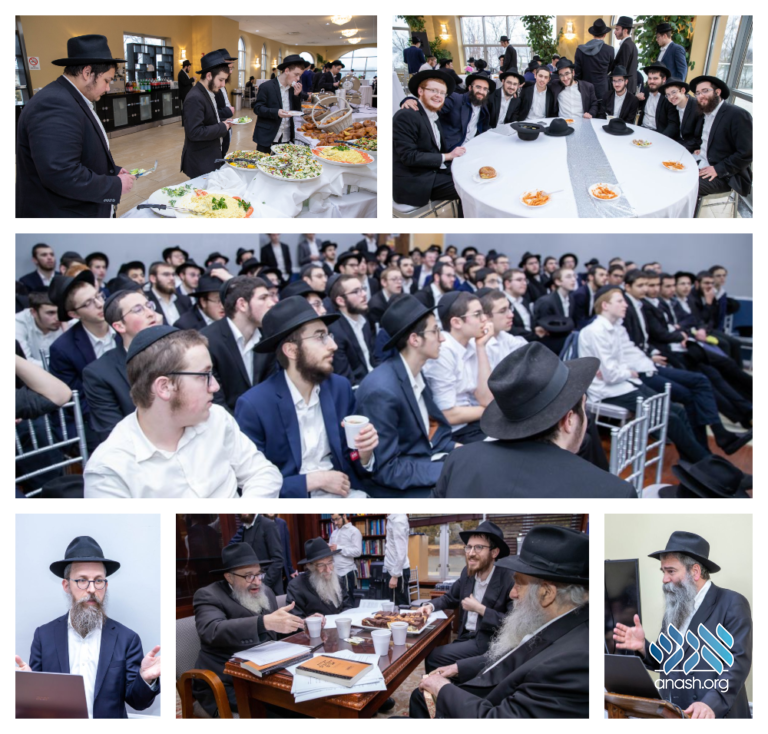 Halikut Siyum Gallery 2: After taking a test on a full volume of Likkutei Sichos, the 230 Halikut finalists spent the next few hours watching exclusive presentations by Lahak and JEM, davening and eating lunch.

The Halikut Siyum, a project of Vaad Talmidei Hatmimim was a full day celebration, honoring the months of learning by thousands of bochurim worldwide, and the perseverance of the hundreds of finalists.

Following the test on the entire volume 25 of Likkutei Sichos, the finalists were treated to exclusive presentations and lavish meals, while behind the scenes the tests were being graded to prepare for the grand chidon.

The day began with the test, a written quiz on the hundreds of pages of sichos they had learned over the past months. The test was followed by a sumptuous lunch, with a beautiful buffet spread. During the meal, groups of bochurim were seen in heated discussions, debating a point in a sichos or looking for a he’oro they may have missed.

After lunch was mincha, immediately followed by sessions. In one room was Rabbi Chaim Shaul Brook of Lahak, who gave the bochurim an in-depth view into the process of how the Rebbe edited sichos and the publication of the vast amounts of the Rebbe’s Torah.

In another room one could find Rabbi Elkanah Shmotkin of JEM giving the bochurim a behind-the-scenes look at all the work JEM does on so many different fronts – preserving the audio and video of the Rebbe, interviewing those who had encounters with the Rebbe, and leaving no stone unturned to find another detail of the Rebbe’s childhood and life.

All the while, preparations were being made for the grand finale and chidon, with the hundreds of tests being graded by teams from the Vaad Hatmimim, and the testers – the Rebbe’s chozrim – taking some time to discuss the finer nuances of some of the sichos.