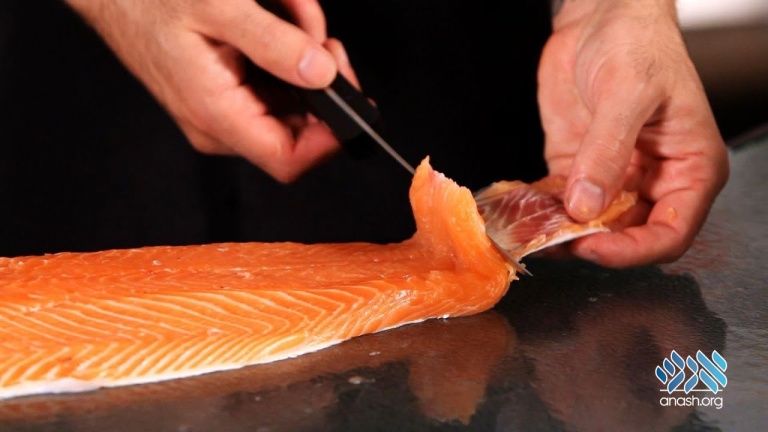 When buying a kosher fish, what should I be aware of?

A kosher fish is ascertained by its fins and scales, and an uncut fish would generally not bring to mind any kashrus concerns. Yet, often worms in the belly or other parts of the fish may propose a true kashrus problem. Halachically, worms that came into existence inside the flesh of the fish do not pose a problem, as they were never considered a sheretz hamayim (“a crawling marine creature”). There is, however, a kashrus problem with worms that developed in the water and were subsequently swallowed by the fish.

For example, salmon with skin and scales must be cleaned before use as many worms infest the scale area. Karp fish is also often infested with worms. In many instances, even fish that grew in a worm-free environment get infested while in transit.

Even if the worm is less than a sixtieth in relation to the fish, it doesn’t become batel as it is a complete creature (biryah). If the fish is ground, it is batel b’shishim, yet one may not grind a fish with this intention if one is certain that it contains worms.

Poskim write that even in circumstances that a worm is permitted (i.e. formed in the fish), if it is recognizable there is still a prohibition of bal t’shaktzu.

A major halachic debate erupted in recent years regarding the Anisakis worm. Although it is found on the fish’s flesh, it essentially originated from the outside as follows: The larvae are ingested by a host (e.g. krill), in which they mature. The host is then consumed by a predator fish, such as salmon, that digests the host but not the Anisakis. The Anisakis then proceeds to penetrate into the flesh of the salmon.

Some poskim are stringent, arguing that the fish swallowed a ready worm, while many other poskim, including HaRav Moshe Landau a”h, held it is permitted since the worm wasn’t yet developed when it was swallowed, and secondly, the age-old custom was to allow this worm.

In practice, reputable kashrus organizations do not give a hechsher on fish that contain this worm, except by herring (since it is unavoidable).