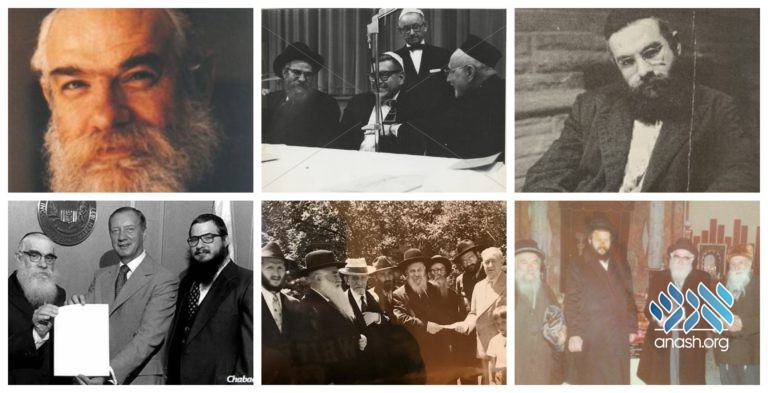 Anash in Chicago gathered last night at the home of Reb Efraim and Tzivia Moscowitz for a Melava Malka honoring the late shliach to Chicago Rav Shomo Zalman Hecht, who passed away on this day 40 years ago, in 5739/1979. Rabbi Hecht had been in Chicago since being sent there by the Frierdiker Rebbe in 5703/1943.

Many shared memories of their personal connections with Rabbi Hecht and his tremendous impact on so many in Chicago.

All shared memories and lessons we can learn from Rabbi Hecht.

Rabbi Hecht was the oldest of the six Hecht brothers. He was niskarev as a young bochur in Yeshiva Torah VoDaas through the efforts of Reb Yisroel Jacobson, who later took the young man for a son-in-law for his daughter. After the wedding in Elul of 5698/1938, the young couple went off to Otwock, Poland, where he could learn in Yeshivas Tomchei Tmimim there and be in the Frierdiker Rebbe’s daled amos. This had been agreed upon before the wedding.

A year later, the war came to Otwock and Poland and the Hechts were told by the American embassy to return to the US. In 1943 there was a need for a rov in Chicago and Reb Sholom Posner recommended young Reb Shlomo Zalman, then all of 26 years old. He soon found much favor in the eyes of mispallelim there and they decided to hire him as rov. Before leaving to Chicago Reb Shlomo Zalman went into yechidus to the Frierdiker Rebbe who told him “everything you do should do in a way of kiruv.” These were his guiding words for the rest of his life.

Over the next 36 years, Rabbi Hecht brought the light of Torah and Chassidus to countless thousands of Jews. The quintessential ah shliach iz a shtik meshaleach, Rabbi Hecht was a true example of what a shliach that is connected to the Rebbe can accomplish, notwithstanding the tide of American assimilation. He would spend much time visiting Baaleibatim in their places of business, organizing shiurim and encouraging them to increase their study of Torah and observance of Mitzvos, as well as giving their children a Jewish education.

Rabbi Hecht was a tremendously gifted orator; his radio show brought the warmth of Jewish living to thousands of Chicago-area Jews. In later years he’d speak about the Rebbe’s mivtzoyim, with a special emphasis on Mivtza Mezuzah. His Motzoei Shabbos winter farbrengens, with a special warmth, were where many young Jews were brought back to Yiddishkeit.

He passed away on Erev Shabbos, 24 Menachem Av. The Rebbe encouraged that the levaya take place that day, despite the difficulty involved in getting the niftar to New York. A tzetel from the Rebbe made reference to the Gemoro in Kesubos that says that someone who passes away on Erev Shabbos is a good omen, but Rashi mentions that the reason involves being laid to rest as well, because the niftar goes straight to the rest – Menucha – of Shabbos, which would mean that the kevurah needs to take place that day as well.

The Rebbe also asked that the mazkirus inform all local yeshivos to attend – albeit not in the Rebbe’s name. The same directive was to be made to the Chevra Kadisha that they announce that all anash also attend – that it be b’rov am.

They managed to get the body to New York that day, but to pass by 770 would be out of the question, due to the constraints of time – with Shabbos arriving. Tahara and levaya took place in Queens. The Rebbe informed mazkirus that if he can be back in 770 in time for Shabbos he’d go to the Beis Olam at Montefiore to attend the levaya. And so it was.

The Rebbe traveled to Montefiore Cemetery and arrived before the aron did. The Rebbe did not enter, presumably not wanting to be near the Frierdiker Rebbe’s ohel, as he had not planned and not prepared to be there that day. The Rebbe asked that the mazkirim go in and attend the burial, with Rabbi Hodakov remaining with the Rebbe. The Rebbe was back in 770 at 6:00 pm. This was one of the rare times that the Rebbe attended a levaya at Montefiore, especially since the events of Shemini Atzeres 5738/1977..