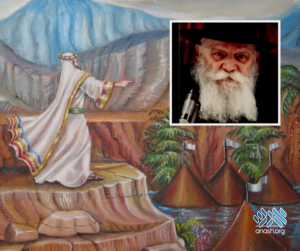 In the summer of 5751/1991, the Rebbe spoke of Moshe Rabeinu’s request to enter Eretz Yisroel, and explained how in fact, Moshe could have actually entered Eretz Yisroel without the Yidden. However, Moshe being a true Rebbe, choose to stay in the Midbar together with the Yidden.

You can also see the above video here.

Just days after this Sicha, Color War broke out in CGI Montreal, and this historic song was written.

This Sicha was later edited by the Rebbe and released as Mugeh. This past week, ‘Vaad Honochas Hatmimim’ in partnership with ‘Mafteiach’ released the complete 68 edits of the Sicha.