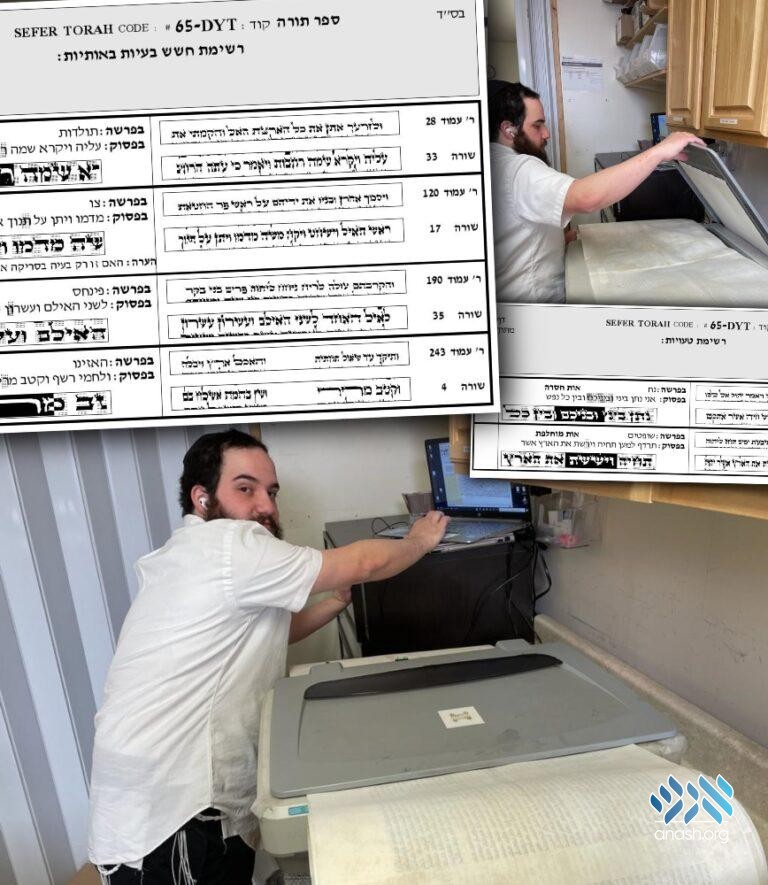 Finding an error in a Sefer Torah can be a real shock to the rov, baal korei, and especially the donor. An advanced computer system developed specially for sofrim averts such occurrences from the get go.

Rabbi Cohen* had been laining in the little Flatbush shul for quite a few years without incident. The Sefer Torah in the shtiebel had been bought not long before, after having been checked by both a computer and a reputable sofer. No mistakes had ever been spotted since the purchase, and the idea of finding one was the last thing on anyone’s mind.

So it came as a surprise to everyone when, that Shabbos, a misspelled word caught Rabbi Cohen’s attention. First thing the next morning, he reverently packed the Torah in his car and drove to Crown Heights. There, Rabbi Yitzchak Raskin of Machon Stam put it through a rigorous Mishmeres Stam computer check. To Rabbi Cohen’s dismay, the check revealed two additional errors, which had gone unnoticed by him and other Baalei Kriah for years.

The above story may sound like a rare occurrence. According to Rabbi Raskin, however, textual errors aren’t as uncommon as one might think.

“First of all, sofrim are human,” explains Rabbi Raskin. “Humans can make mistakes. When you’re talking about an entire Torah, it’s extremely rare for a sofer to write the whole thing perfectly the first time. Often, even very meticulous sofrim will make quite a few errors, which need to be corrected afterwards.”

After the writing, then, a thorough examination is an absolute must. Every Torah is looked over by trained examiners, called magiim. Still, the magiah, like the sofer himself, is susceptible to human error; for this reason, running a computer check- or even two- is considered essential. While blatant issues such as cracking ink or touching letters might catch his eye, he may not detect more subtle problems, especially when the issue doesn’t affect the way the pasuk reads. For instance, if Hashem’s name is meant to be spelled “י-ד-ו-ד” but has mistakenly been written as “אדנ-י,” the error is likely to slip past the magiah. A computer check, on the other hand, would register such a problem instantly.

While there are several specialized programs for checking Sta”m in this day and age, computer systems present their own set of challenges.

“Typically, most computer checking systems will just pick up on everything– we’re talking thousands of mistakes,” Rabbi Raskin explains. “Then the sofer’s got to go through them all, selecting the real problems and deleting the ones that the computer just misread. In my experience- especially with sofrim who aren’t specifically trained in spotting errors- serious mistakes can simply get lost in the crowd.”

To be fair, Sifrei Torah do have certain leniencies compared to other Sta”m, especially once they’ve been taken out for laining. A number of the  errors that disqualify Tefillin or Mezuzos do not require a Sefer Torah to be put back during kriah. Still, of course, a mistake of any kind is not ideal, and should be corrected at the first opportunity. But not all of the errors Rabbi Raskin has found in already-checked Torahs have been minor.

“I’ve seen textual errors,” he recalls. “Missing words, misspelled words… things that invalidate a Sefer Torah according to all opinions. Just recently a mistake was found in one of 770’s Sifrei Torah, which had been examined twice by a magiah and twice again by a computer. The owners of the Torah brought it over to Machon Stam, and they asked me how they could ever have confidence that such a thing wouldn’t happen again.”

They weren’t the first to have the same concern. Fortunately, their question was addressed a number of decades ago by an organization called Mishmeres Stam.

As the name suggests, Vaad L’Mishmeres Stam was a movement dedicated to the integrity of sofrim and their merchandise. It was established in the mid 70’s by Rabbi Yehuda Greenfeld, a student of Rav Shmuel Vosner, a leading posek in Eretz Yisrael.  During its heyday, the Vaad accredited sofrim, certified authentic Sta”m, and educated people. It received widespread support from community leaders and Rabbonim- including the Rebbe- during the early days of its fight against fraud in the Sta”m market.

Arguably the organization’s most lasting achievement, however, was a computer checking program that stood out from the rest in several important ways.

“Most systems pick up on everything,” Rabbi Raskin explains, “including thousands of issues that turn out to simply be computer errors. This overload could lead to the sofer missing a critical issue. Mishmeres Stam focuses specifically on serious mistakes to help provide a better chance at catching them all.”

In addition, the system’s error reports are combed through by a team of certified experts trained by Mishmeres Stam, rather than by the sofer himself. Having the report reviewed by someone who specializes in specifically this task drastically lowers the chances of any real problems going unnoticed.

In fact, when the owners of the 770 Torah, on Rabbi Raskin’s recommendation, put their Torah through a Mishmeres Stam check, they were astounded to find yet another serious issue, which had evaded the notice of every Ba’al Koreh and Magiah.

Like all good quality items, however, a Mishmeres Stam testing system comes with a price tag. Sofrim need to pay for every check on an individual basis, rather than just buying or leasing the system once. The added cost means a greater expense for the consumer, who- not knowing the difference- will opt for a cheaper alternative. For this reason, not all sofrim incorporate a Mishmeres Stam check in their standard package. In Rabbi Raskin’s opinion, the cost is worth it.

“I’m not saying other checking programs are flawed,” he clarifies. “And I’m not saying Mishmeres Stam is foolproof. Many magiim prefer to use other programs for their initial check. But when a consumer buys a Sefer Torah, he wants to be sure that the chances of it being kosher are as high as they can possibly be. Even if it means investing a few extra dollars, that kind of assurance only comes with a Mishmeres Stam check.”