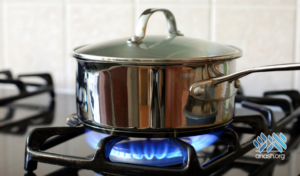 Adjusting the Flame May I lower the burner when cooking on Yom Tov?

Food-related melachos, such as cooking, are permitted on yom tov. This includes lighting a fire—from a preexisting flame—in order to cook, or raising a preexisting flame on a gas stove (as long as no sparks are initiated by the stove igniter). An electric burner may not be adjusted as this initiates a new circuit.

Chazal received a tradition that any melacha defined as food-related is also permitted for any yom tov need—even not food related—but only for forms of bodily benefit that are relevant to the common Jewish populace. For example, one may transfer a flame to use its light to do matters that are needed on yom tov. However, one may not burn incense on yom tov, since this is only a need for a specific class of people.

Extinguishing or weakening a fire (mechabeh) isn’t categorized as a food-related melacha and is thus generally prohibited on yom tov. Therefore, one may not turn off a light that is disturbing one’s sleep, or extinguish a fire that is causing major monetary damage, unless it poses pikuach nefesh (which is almost always the case by major fires in modern housing). One may, however, extinguish a fire if it’s explicitly for the purpose of food, such as if the fire will burn up the food for the yom tov meal and there is no other way to save it, or if it will cause one not to have any place to eat the meal.6 Additionally, one may roast meat directly on coals even though it initially extinguishes the coals a bit.

If a gas stove burner is set high and one needs a lower flame to cook with, some poskim argue that lighting another burner from an existing flame is preferable to lowering the original burner, for the former option is more closely related to the food preparation than the latter (which is merely removing an impediment to the cooking). From the Alter Rebbe, however, it is clear that extinguishing a flame for cooking purposes is bona fide ochel nefesh, and one may turn down the existing fire on a gas burner for this purpose.

Some suggest a creative method of extinguishing the burner—by putting a full pot of water (that will be used on Yom Tov) on the stove until it boils over and puts out the fire. This is an indirect manner of extinguishing (gram kibuy) which according to some is permitted on yom tov. Some write that this heter should only be relied upon in case of need. The Alter Rebbe, however, holds that gram kibuy is prohibited on yom tov just like Shabbos, and it may only be done in cases of great need or loss, which is usually not the case with a burner.