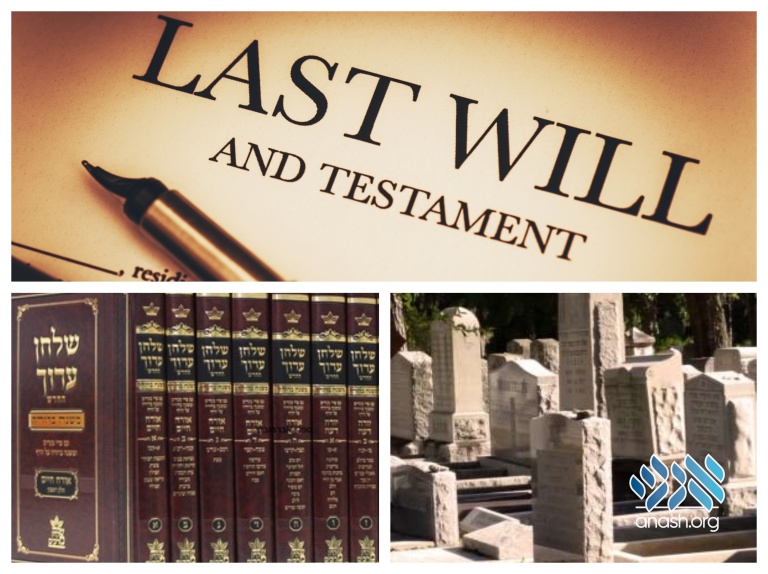 The estate of one who has no children or siblings is inherited by his paternal grandfather, paternal uncles or their progeny (i.e., his cousins). A husband inherits a wife but a wife doesn’t inherit a husband. (As a widow, though, she is to be supported by the estate indefinitely and has certain other rights based on her Ketubah.) [See Choshen Mishpat Siman 276 and 277 for more details about this matter.]

By Torah law, a will which changes the terms of the inheritance from that of the Torah’s rules (as explained above) may be invalid depending on various factors [see ibid, Siman 281].

One who wishes to distribute his estate in a manner that differs from the above Torah arrangement, and makes a will enforceable by the law of the land, may be causing his heirs to violate the Torah’s laws.

Presumably the beneficiaries will receive the share bequeathed to them as per the local state laws. If according to the Torah’s laws, this money is not due to them, they are in effect stealing it from those to whom it does belong.

In many cases the Torah assigned heirs who are receiving less due to the legal will, are happy to fulfill the wishes of their parent. As such it can be considered that they gifting to others what is due to them. But there may be cases where the heirs are not happy to part with the amount the Torah allocates to them, despite their parents’ wishes. In addition, minors are halachically unable to give gifts. As such, in the case of Torah heirs who are minors, following the legal will instead of the Torah’s guidelines might be considered stealing.

Arguments for the Efficacy of a Legal Will

There are several opinions that say that a secular will can be halachically binding. Their arguments are presented briefly below. However, as will be explained, there is reason to dismiss every one of these arguments. As such, it behooves a person who writes a legal will to find a way to ensure that the disbursement of his assets does not contradict halacha.

It is a Mitzvah to Follow the Wishes of the Deceased

According to our sages, it is a Mitzvah to fulfill the will of a deceased person [Y.D. 252:2]. As such, when one reveals his wishes by writing a secular will, it would seem that the heirs are obligated to follow those wishes.
The Halacha states, however [ibid], that the above applies only if, at the time of expressing his wishes, one gives his property to a third party and entrusts that person to fulfill his wishes. Since this is not usually the case, this concept would rarely apply.

In addition, some say that the Mitzvah to follow the wishes of the deceased is not incumbent upon minor heirs who have not yet reached the age of obligation of mitzvot [Ran on Gittin 13a and Erech Lechem on ibid]. According to this opinion a secular will is invalid by Torah law in a case where some (or all) of the halachic heirs are minors.

Most authorities, however, are of the opinion that the above rule applies only to one who distributes his estate while on his sickbed. It was only in this case where the sages established that we follow his instructions lest he become upset about the matter and become even sicker [Tur and Bait Yosef, Chosen Mishpat, end of Siman 250]. As such, if a healthy person makes a will that changes the amounts that each party inherits, it is not halachically binding.

The Law of the Land Is the Law (Dina DeMalchusa Dina)

In some areas of monetary halacha, the Torah recognizes that one must follow the law of the land [see Encyclopedia Talmudit, entry Dina DeMalchuta]. As such, it can be argued that a will recognized by state law should automatically be effective by Torah law.

The method that seems halachically acceptable is to write up the following document when making a secular will: The method by which the document works is that it states that the testator (the one making the will) assumes a debt upon himself or herself which will be payable from the estate and is only due a moment before his death.

This debt should be more than the amount that he is giving to the non-Torah heirs (or the amount he is giving to a Torah heir that is beyond what the Torah would grant him). If, for example, he is giving $200,000 to people other than his Torah heirs, he should accept a debt upon himself that is greater than that sum. The debt is assigned to be payable to a particular Torah-observant Jew whom one trusts. (Practically, this debt will never be collected.)

He then stipulates that if his heirs follow the dictates of his secular will, he frees them from the obligation to pay the debt he assumed. In order to avoid paying this debt, the heirs will definitely choose, of their own accord, to follow the dictates of the secular will. (The amount due to the debt is greater than the amount they are giving to the other heirs, so they will obviously choose to give the money to the heirs.) Since the heirs will do this willingly, the money that is given to others will not be considered “stolen money.”

The purpose of this article is not to condone the writing of such wills. Rather, the purpose is that if, for whatever reason, one has (or plans to have) a will which differs from the Torah’s inheritance, he should, at the very least, write the document below in order that the heirs not be stealing property which is not halachically theirs. In practice, one should discuss the details of how to distribute one’s estate with a Halachic authority.

Here are some situations in which it is permissible (at least according to some opinions) to change the order of inheritance given by the Torah. [In addition, the correct method of kinyan (transfer) must be done so that the changes are recognized by the Torah as explained above.]

Giving to the Daughter

It is permissible to give some of one’s inheritance to one’s daughter so that she will find a good shidduch [Ketubot ibid and Responsa of Maharam Mintz 47]. Some say that this holds true even after the daughter is married [see Tosfot D.H. Hashta on Ketubot ibid]. The logic is that if people know that a woman will eventually inherit from her parents, they will be more likely to marry her. (But see Chatam Sofer, Even Ha’Ezer 147 that one should not treat one’s sons and daughters as equal heirs since the Torah does not do so.)

Leaving a Significant Amount for the Torah Heirs

Some say that one may give part of one’s  inheritance to people who do not inherit by Torah law as long as one leaves a significant amount to each of the heirs who should inherit according to the Torah [Tashbetz quoted by Ketzot HaChoshen 182:2]. Others disagree [see Pit’chei Teshuvah 182:2].

It is not only permissible but praiseworthy to leave significant amounts of money in one’s will for Tzedakah [Rama Y.D. 249:1 and Ketubot 67b]. Some say that one should not give more than a third of one’s estate at this time [see Hagahot Rabbi Akiva Eiger on ibid in the name of the Tashbetz] while others permit giving up to half [Aruch HaShulchan Y.D. 249:1]. Their reasoning is that by giving half, one is dividing his estate equally, one portion – the tzedakah – for one’s soul, and the other portion for his heirs.

Text of the Document

Here is the text of the document one can make in order to have his secular will be accepted by Halacha. The footnotes explain the necessity of some of the language of this document. Below are instructions as to how to execute this document and render it Halachically effective.

How to Make the Document Effective

After filling out the details in the above document, one needs to make a formal kinyan (ritual act of acquisition) in order for the debt to be effective. The kinyan should be a kinyan suddar (a kinyan effected by the acceptance of a scarf or some other object as a symbol of the transaction).

This kinyan is done in the following manner: The testator (the one making the will) declares to the obligee (the person towards whom he is assuming the debt) his intention to execute a kinyan suddar in order to establish an indebtedness upon himself.

The obligee should then give the testator an object (a pen, a hat or the like) with the intent of entitling himself thereby to the indebtedness in symbolic exchange for the object. The testator should then raise the object twelve inches (three tefachim). He has thus acquired the object and established the debt upon himself. The testator can then return the object to the original owner (the oblige).

If the obligee will not be present at the transaction he can appoint a fellow Jew as his agent (“shaliach”) to execute the transaction on his behalf. The agent’s pen or hat should be used for the kinyan.

The testator should then sign the note and deposit it, along with a copy of the will, with a trustworthy individual. One may also keep a copy for oneself.

A Will By One’s Wife

One whose wife is writing a separate will should make a similar document in which he obligates himself to pay a large sum of money should he not follow the instructions in her will. This is because, according to Halacha, it is the husband who inherits his wife’s estate. The details of this document can be found in the book mentioned in the beginning of this article.

There are several other details that one should bear in mind regarding this document but, for the sake of brevity, I am leaving these out.
For more information, see Kuntres MiDor LaDor by Rabbi Shraga Feivel Cohen (New York 2008).

May we merit to Live Long and Healthy Lives and to See Moshiach Speedily in Our Days When Death will be Swallowed Forever!

[1]  The purpose of this line is simply so that there not be a blank space in the document. This would be problematic as it would allow people to add other things to the document that are not part of the agreement.]

[2] See above that this amount should be larger than the amount one is leaving to non-Torah heirs.

[3] The name of a trusted member of the Jewish faith should be inserted here, this person should not be one of the Torah heirs.

[4] Without this clause the Torah heir could claim that he already paid the debt and could therefor revert to receiving the full amount dictated by the Torah.