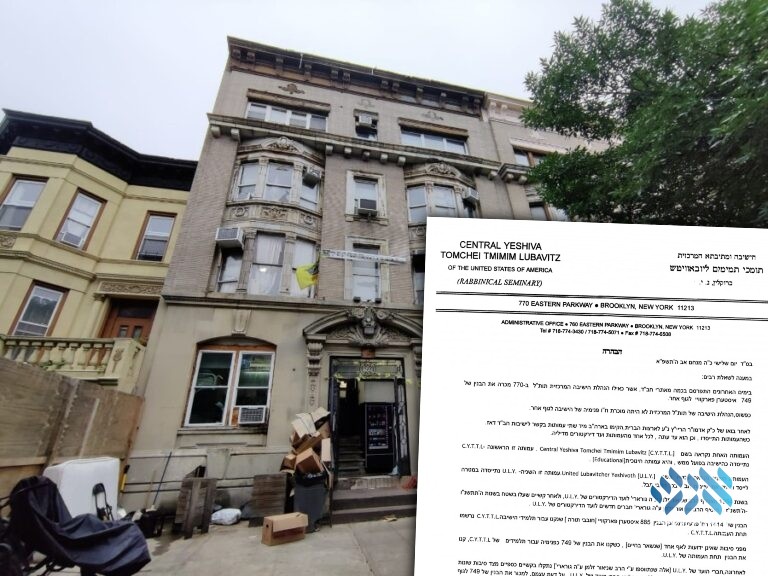 After news broke that the iconic 749 dormitory building has been sold to the Igud Talmidei Hakvutzah organization, Rabbi Moshe Meir Gluckowsky of Tomchei Temimim 770 is clarifying the Yeshiva’s involvement in the sale.

After news broke that the iconic 749 dormitory building has been sold to the Igud Talmidei Hakvutzah organization, Rabbi Moshe Meir Gluckowsky of Tomchei Temimim 770 is clarifying the Yeshiva’s involvement in the sale.

As first reported here on Anash.org, the administration of United Lubavitcher Yeshivoth sold the iconic 749 dormitory building to the Igud Talmidei Hakvutzah organization, which provides an alternative ‘Kevutza’ framework, following decades of legal and financial issues.

Since the late 1960s, the four-story building at 749 Eastern Parkway has served as a dormitory for bochurim learning at the Central Yeshiva Tomchei Temimim located at 770 Eastern Parkway, right across the street. The Rebbe visited the building on a number of occasions to see how the bochurim conducted the seder of the night of Pesach.

Unlike the dormitory at 1414 President Street, which is under the direct management of the yeshiva administration, the dormitory at 749 Eastern Parkway, known simply as “749”, was left without any official management by the administration. The rooms in the building were not assigned by any official body, but instead were passed from bochur to bochur.

In recent years, differences of understanding between various bodies in the administration of the 770 Yeshiva have led the building situation to deteriorate, and financial and legal issues began piling up, resulting in extreme difficulties to individuals legally responsible for the building. Seeing no other resource, the United Lubavitcher Yeshivoth administration realized that they would no longer be able to hold onto the building.

After lengthy negotiations, they agreed to sell the dormitory to Igud Talmidei Hakvutzah Inc. The Igud organization was founded recently to assist the students who traveled from Eretz Yisroel to spend a year studying in ‘kvutzah’ as well as to facilitate the arrival of larger groups of students who did not wish to join the traditional framework of the 770 Yeshiva.

In recent months, the ULY board and the Igud organization have been working on the legal details of the sale, giving full control and ownership of the building to the Igud.

After news of the sale broke, Rabbis Moshe Meir Gluckowsky and Benji Stock of 770 Yeshiva’s hanhala gashmis released a letter clarifying their involvement in the sale.

“In recent days a number of Chabad news websites have published a story portraying as if the hanhala of Tomchei Temimim 770 sold the building at 749 Eastern Parkway to another entity,” they wrote.

The two explained that there existed two separate entities, both founded after the arrival of the Frierdiker Rebbe in U.S.A. One was an educational corporation, under the name of ‘Central Yeshiva Tomchei Tmimim Lubavitz’, which the actual 770 Yeshiva operates under. A second, which is currently called ‘United Lubavitcher Yeshivoth’, was founded to strengthen Chabad yeshivos across the globe.

“Recently, U.L.Y.’s board of directors have fallen into financial difficulties for various reasons, and as a result, members of the U.L.Y. committee decided, on their own initiative, to sell the 749 building to another entity,” they concluded.