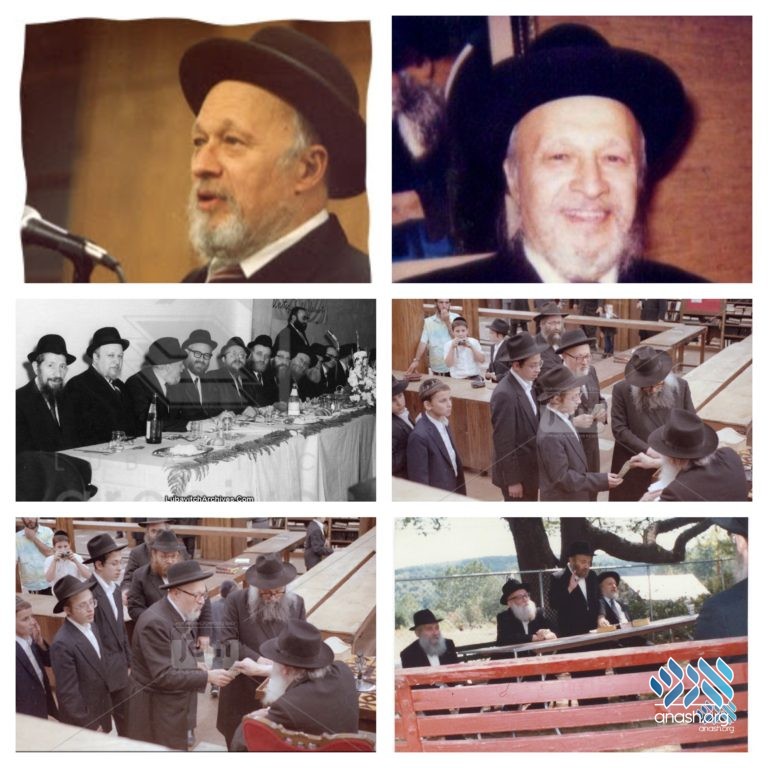 Harav Meir Greenberg was one of the first American temimim, and was one of the six bochurim who traveled to the Frierdiker Rebbe in Otwock on the eve of the Nazi invasion. He later served as a Rosh Yeshiva, Rov, and Shliach.

Rav Meir Greenberg was born in Brownsville, Brooklyn on 14 Cheshvan 5677/1916. His parents had come to this country from Russia. As a child, young Meir, and his father Reb Yehoshua Falk, davened in the Anshei Bobruisk shul. In 57686/1926, a new rov was appointed. His name was Reb Yisroel Jacobson, who had just arrived from the “Old Country.”

That winter he entered the Cheder of Torah VoDa’as. He was a bit behind where a child his age was supposed to be, so Rabbi Jacobson would spend much time every day learning with him. By the next year Elul he had caught up to his level and could learn with bochurim his age.

Rabbi Jacobson also introduced young Meir to the world of Chabad and to Chassidus. Once a week he’d have a shiur Tanya in his home where he’d farbreng with the bochurim. Soon, Achei Tmimim was founded, and Meir was the representative in Torah VoDaas.

All this time Meir was growing in Torah. Soon he was the prize talmid of the gaon Reb Shlomo Heiman, who was the Rosh Yeshiva in Torah VoDaas who was brought over from Lithuania at the request of the menahel Reb Shraga Feivel Mendelovitch of the gaon Reb Chaim Ozer of Vilna. For many years Rav Greenberg would say a shiur on Rav Heiman’s yahrtzeit – the 17th of Kislev – in Tomchei Tmimim in Morristown, and he’d also be invited to give a shiur in Torah VoDaas on a rotating basis with several other great talmidim.

By 5699/1939, after having studied with Rabbi Jacobson for years, Reb Meir was ready to travel to the Yeshiva Tomchei Tmimim in Otwock. He was one of the six bochurim that arrived there in Elul of 5699/1939, just days before the Nazi invasion. On the way to Europe the bochurim met the Rebbe, who asked them to deliver medication to the Frierdiker Rebbe. Two week later they were fleeing from the Nazis. Before leaving to Riga – where they spent Chodesh Tishrei – they had yechidus with the Frierdiker Rebbe, who bentched them that Hashem should help “az m’zol zich zehn gezunterheit.”

Upon returning to the United States Reb Meir was one of the founding group of temimim that started Tomchei Tmimim in America on Shushan Purim, 5700/1940.

Several months after starting in Tomchei Tmimim, Meir was sent to Chicago for six months by the Frierdiker Rebbe. While there, he visited nearby Milwaukee and Detroit. His job was to spread Chassidus among the yidden there, especially those that were from a Chabad background. The Frierdiker Rebbe sent letters to those communities, to Reb Sholom Posner and to Reb Moshe Leib Rodshtein, speaking of the virtues of his young talmid and asking them to help him in his mission.

All this time young Meir didn’t stop learning b’hasmodoh. Upon returning to 770 he received semicha from the roshei yeshiva there, as well as from the gaon Rav Moshe Feinstein and from Yeshiva Torah VoDaas. The semicha from Reb Moshe was especially difficult to attain, with a prospective candidate needing to spend weeks with Reb Moshe, answering all kinds of questions, covering all parts of the Shulchan Aruch. Upon receiving semicha he was appointed a maggid shiur in the yeshiva in 770, until he fell ill and the doctors forbade him from teaching, at which time he became a mashgiach there.

On 14 Kislev 5704/1943, Reb Meir married Baila Malka Grossman, who passed away in 5769/2008. (Her brother was Rabbi Rafael Grossman, a long-time rov in Memphis, Tennessee.) In honor of his wedding he received a letter from the Frierdiker Rebbe, where the Rebbe writes about a wedding in general, and how it’s beginning of a person’s life in the world- as opposed to a bochur’s life in yeshiva. For close to a decade he served as Chief Rabbi of Worcester, Massachusetts. In 5714/1954, he was appointed rov in Paterson, New Jersey, in those days a town full of Jewish life, a position he held for the next 45 years.

Paterson was then a large manufacturing town with some 40,000 Jews. Seven large frum shuls dotted the landscape there. In Paterson his speaking ability became apparent. On Yom Kippur he would speak in all seven shuls, in each shul he’d give a speech. When once asked why he bothers to prepare that many speeches when nobody in any shul what he said in the previous shul, he responded: so that my bagleiter (he who accompanies me) shouldn’t get bored.

See the Rebbe through Reb Meir

Reb Meir usually would not go into yechidus very often, not wanting to take up the Rebbe’s time. On one occasion in 718/1958, he accompanied a Jew from Paterson to yechidus. The man was sick and burst out in tears, saying: “I’m very sick, the doctors don’t give me much time, I’m going to die!” The Rebbe responded: “Chas vesholom, ir kont noch leben tzvantzig yohr.“ (you can still live another 20 years). The man passed away in 5738/1978, twenty years later. At that time, the Rebbe asked that yid if he ever saw the Frierdiker Rebbe, the man responded that he hadn’t. The Rebbe responded: “look into the eyes of Rabbi Greenberg, he saw my father-in-law, if you look into this eyes you’ll see the Frierdiker Rebbe as well.”

In 5719/1959 Reb Meir was appointed Rosh Yeshiva of the Yeshiva in Newark (later in Morristown). His old mentor, Rabbi Jacobson, was the one that pushed him to accept the position. A decade or so later, the yeshiva moved to its current location, Morristown. Reb Meir’s shiurim in yeshiva were known for their depth; you had to halt kup, but it if you did you could follow along, so “clear” and well-presented were his shiurim. (Listen to one shiur after the article). Many of these shiurim were later compiled by Reb Yisroel Friedman, then the mashgiach in Newark, into his seforim: Shiurei Gittin and Shiurei Mesechtos.

As rosh yeshivah, his staff was always impressed by how a man of that stature and so much the senior to his co-workers, treated them as his equal.

Shlichus in the “Igud”

Rav Greenberg maintained a strong relationship with many gedolei yisroel, some of whom were his yeshiva mates in Torah VoDaas. He also was in contact with rabbonim like Rav Moshe Feinstein and others. A story is told how when Rav Yitzchok Hutner once came to Torah VoDaas to give a shiur, and during the shiur he asked a question which he was sure nobody would have the answer to. So sure was he that nobody would have the answer that he said “I’ll eat my hat if anybody has the answer.” Meir Greenberg answered the kashe immediately. Rav Shlomo Heiman, the rosh yeshiva, is to have told Rav Hutner, ihr muzt itzter essen dem hittel” (you now need to eat you hat). Other great rabbonim he was close to included Rav Yoshe Ber Soloveitchik of Boston and YU.

In later years there was Litvishe yeshiva in Paterson, the Yeshiva Gedolah of Paterson. The bochurim there knew that he was a great lamdan and would often come to Rav Greenberg’s home to speak in learning with him.

Rav Greenberg also was part of many other organizations, both for strengthening Torah and the study thereof, and the support of those that study. He was also head of organizations such as Bikur Cholim and help for soldiers returning from war.

It is interesting to note that Reb Meir Greenberg passed away on 3 Elul (5768/2008), sixty years to the day from when his menahel, Reb Shraga Feivel Mendelovitch, founder of Mesivta Torah VoDaas, passed away.