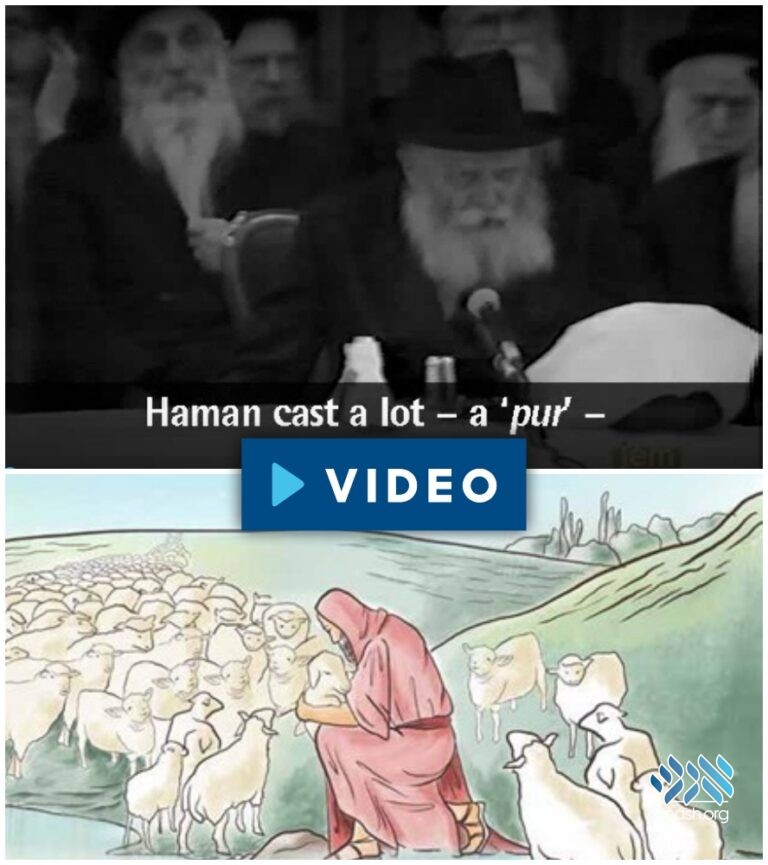 Zayin Adar marks the day of the birth, and exactly 120 years later, the passing of Moshe Rabbeinu. Read a lesson from his life, and watch a clip from the Rebbe’s farbrengen on this day in 5745.

When it came time for the Yidden to enter Eretz Yisroel, Moshe begged Hashem to let him enter with them. The Midrash tells us that Hashem responded that this could not be done, for it would be akin to a shepherd whose sheep had been captured: If the shepherd returns to the palace without the sheep, people would say that he had stolen them. So too, Hashem told Moshe, you brought 600,000 out of Mitzrayim, “You must stay at their side and come [to Eretz Yisroel] with them,” when Moshiach comes.

This doesn’t seem right, the Rebbe says. Why should Moshe have to stay at the side of the generation of the midbar? He was nothing like them! The generation of the midbar remained in the midbar as a punishment for the fact that they didn’t want to go into Eretz Yisroel, with the story of the meraglim, whereas Moshe Rabbeinu’s greatest wish was to enter Eretz Yisroel. Why should Moshe stay in the midbar to remain with them, when he could not be more different than them?!

The answer to this lies in the parable of a shepherd: At his very essence, Moshe Rabbeinu was a shepherd of the Yidden, a ro’eh Yisrael. And as a true shepherd—he cannot abandon his flock, no matter what!

And he gives up everything for them; he told Hashem, “if you don’t save them, erase me from your Torah!” Why? Because he is their shepherd! And a shepherd does not abandon his flock, no matter how low they have fallen! This is also why he remained in the midbar: he would not leave his flock, no matter what.

The Rebbe spoke about this theme many times, but in one sicha he added a poignant point: “This is also expressed in the fact that Moshe Rabbeinu lived for exactly 120 years, unlike his brother Aharon who lived for 123: His connection to his generation was so essential and powerful that when the generation of the midbar passed away, he couldn’t leave his flock—and he couldn’t continue living without them! As soon as the last people of his generation passed away, he could no longer live!”

On another occasion, in a sicha punctuated with tears, the Rebbe explained that this was followed by the nesi’im throughout the generations: “This is true regarding every leader and nossi in their own generations: Notwithstanding his own level, the nossi puts everything on the side, and looks at his flock. If his flock remains in galus, blaibt er liggen, he remains… in galus, so that he can continue serving as a channel, a memutza hamichaber so that every Yid can connect the essence of their neshamah… with atzmus umehus of Ein Sof.”

For more high-quality, inspiring and fascinating content pick up your own copy of the Derher magazine for only $6.95!

VIDEO: Clip from the Rebbe’s farbrengen of Zayin Adar, 5745