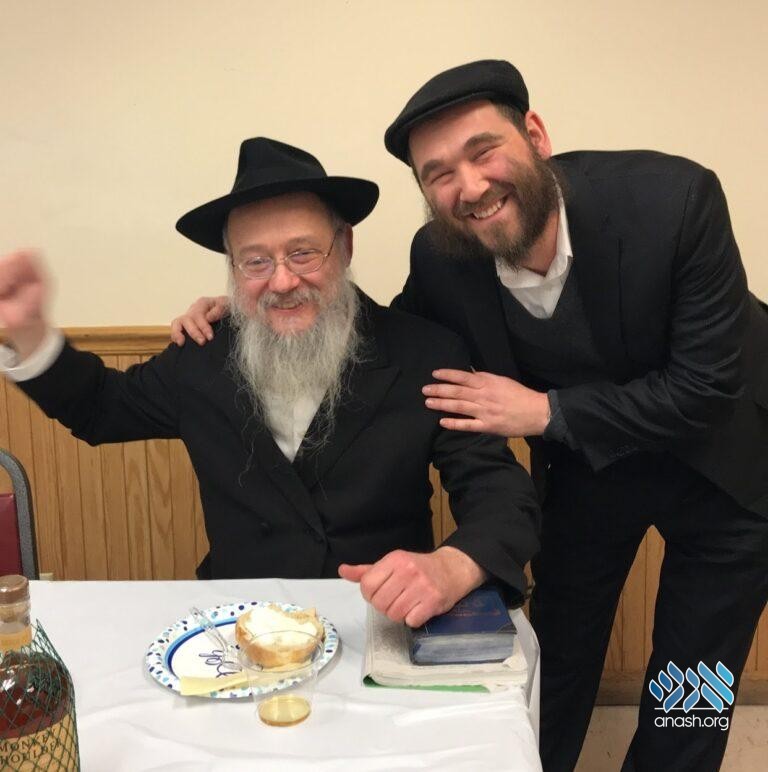 R’ Aaron Leib Dukes, writes what we can learn from his son Yudi’s short but influential life. His mission statement and legacy was to make connections between people, to serve a higher purpose.

Through and since the Shiva for my son Chaim Schneur Zalman Yehuda a”h, I’ve been trying to sort out what to learn from his short but very influential life. On Tu B’Shvat, the New Year for Trees, we stood at his gravesite on what seemed like the coldest and windiest day of the year so far and said Tehillim and Kaddish facing the headstone that had just been erected the day after the Shiva. This was exactly a week after what will become Yudi’s yahrtzeit, and exactly a week before the Rebbetzin’s 33rd yahrtzeit, which we commemorate today.

Interestingly, Rebbetzin Chaya Mushka was born on the 25th Adar. Our Sages debate whether the Creation which culminated with Adam and Chava happened on the first of Nissan or the first of Tishrei. We understand that the Natural Order begins with Tishrei and the Miraculous Order begins with Nissan. Within the Miraculous Order, the first day of the creation would be the 25th of Adar, which is the Rebbetzin’s birthday.

Yudi was born on Shabbos morning, the 23rd of Kislev. We celebrate Chanuka based on the miracle of a one-night’s worth of oil remaining lit in the Menora for 8 nights. This miracle however followed an amazing military victory which we generally do not celebrate. The Sefer Dvar Yom b’Yomo says that when the 23rd of Kislev falls out on Shabbos, this commemorates the military victory of the Chashmonaim over the Greek oppressors.

When I was called at 12:30 AM to come into the hospital, I took with me two sefarim, Igros Kodesh Vol 18, and Basi L’Gani including the Rebbe’s Maamorim. Each year the Rebbe would deliver a maamar based on the corresponding section of the Previous Rebbe’s Sequence of Maamarim which he prepared for 5710. This year’s section is Section 11. Holding Yudi’s hand, while the others present were singing beautiful niggunim, I learned about half of the first of the Rebbe’s Maamarim of 5721. The focus of the Previous Rebbe’s Section 11 is War and the attribute of Nitzachon and its relationship to the Divine Name Tzva(k)os. The Rebbe discusses how this name relates to the Jewish people being called Tzivos Hashem as they left Egypt, and in his B’Shalach sichos of 5721 and 5741 there is a strong emphasis on what it means to be a soldier and waging war against Amalek.

I think Yudi was a dedicated soldier who waged spiritual war against today’s Amalek – the cool indifference and opposition to Torah-true Judaism. Before I describe his weapons, I want to preface with a story I just read (Living Jewish #775) regarding the Rebbetzin:

On a visit to Crown Heights, Reb Zalman Jaffe and his wife were invited to tea by the Rebbetzin one Friday afternoon. At the said farbrengen in Manchester in 1988, Reb Zalman described the scene.

“The Rebbetzin was very busy, speaking on the telephone. I politely asked her how many people she spoke to on a Friday afternoon. She replied that it was about 150 people and she explained that it was a fixed list of people to whom she wished a good Shabbos every erev Shabbos.

“At the same time she took requests and information to pass on to the Rebbe, and would relay any answers on the following Friday. As we were talking, a maid informed the Rebbetzin that her international call was on the line. In those days international calls had to be booked via an operator in advance.

“She then spoke to her aged aunt, Rebbetzin Tzila, the widow of her late uncle, Rabbi Ben Zion Schneerson, her mother’s brother. Rabbi Ben Zion had passed away in the early ‘60’s childless, and his widow never remarried. She left America for Jerusalem, eventually going to live at an old age home there. The Rebbetzin then spoke these immortal words:

“‘I phoned to wish you a good Shabbos and to see how you are; but more important, to let you know we care about you and think of you all the time.’”

No doubt we could all do well to emulate the Rebbetzin’s care and thoughtfulness, and make sure that all of our own acquaintances know that someone, somewhere cares about them.

I don’t remember exactly when this started, but perhaps two or three years ago, I started getting calls on Fridays from Yudi wishing me a good Shabbos. These calls frequently came when Yudi was driving his kids to school on his way into Crown Heights. Sometimes they came at quieter times of the day. But it was consistent. And I’m sure I’ll hear that I wasn’t the only one he called…

This past Shabbos morning I opened the Igros Kodesh Volume I took into the hospital with me. It opened to pages 384-385, to a letter the Rebbe wrote in 5719 (1959) to all the members of Nshei uBnos Chabad regarding that year’s Chabad Women’s Convention. In the letter, the Rebbe focuses on the Torah portion for that date, the first portion of BaMidbar, which begins with a description of a census:

What can we learn from this and apply to our work of spreaking Judaism permeated with Chassidic light and warmth?

One of the biggest obstacles to being committed to and warming up your fellow is the perspective “How is this any of my business? So what if he has fallen so low, what can I possibly do about it anyway?”

But if you think into what we mentioned about counting, that on your own, you count as no more that one, and if you want to acquire the power and importance of more than one, you need to join yourself up with others.

Realizing that numerically he is just as equally one as you are, it now becomes very possible that with the appropriate assistance from you, he can come to equal you in all achievements…

We can therefore see the incorrectness of the abovementioned obstacle, and we can see the incredible accomplishments, both for yourself and for him, which can be realized when you throw yourself into this work with renewed vitality and energy!

A few weeks ago, I spent a couple of Shabbosim on the upper East Side, visiting Yudi Friday and Shabbos afternoons. Sometimes he was lucid, other times less so. He could move his lips but no sound would come out. I tried to understand what he was trying to communicate, and asked questions which could be answered with a Yes or No. Occasionally I succeeded in understanding, more frequently not. Sometimes we used a sheet with the letters of the alphabet written on it and I would ask him to spell out what he wanted to say. Usually, he didn’t have the energy, when he did, it was more often than not gibberish (to me). One such time, after exhausting the possibilities of how I could help him, he did spell out something coherent which made no sense to me at the time in the context of how I could help him in his immediate situation.

When I read the above letter from the Rebbe this past Shabbos, it finally clicked in my head what Yudi was telling me. His mission statement, legacy and message to us to emulate is: “I JOIN”.

As a bochur who left our home in Morristown to learn away from home in Brunoy, Buenos Aires, Montreal, Crown Heights, Budapest, and Manalapan, with breaks running camps, traveling throughout Europe and making Pesach Seders in far-flung places in Russia, his motto was “JOIN LUBAVITCH AND SEE THE WORLD”.

As a Chazzan and Baal Koreh he annually inspired many different communities to JOIN up with their Father in Heaven during the Days of Awe.

While driving his children home from Cheder, he would make detours to JOIN up with people on the way, helping them JOIN themselves up with G-d through the mitzva of Tefillin.

He looked at his 9½ months in the hospital not as a confinement, but rather as an opportunity to JOIN doctors, nurses and fellow patients to the mitzvos of their Jewish heritage.

And his primary mission as Direcor of JNet was as a CONNECTOR, arranging learning partners to JOIN with each other for scheduled learning sessions.

He even had a side-gig, finding available Torah readers and JOINING them up with synagogues who needed them for the Shabbos Torah Readings.

But Yudi’s primary focus and contribution was something a bit different. He joined people with each other, making horizontal connections between them to serve a higher purpose.

Let’s all learn from Yudi to JOIN. Let’s connect with each other so that we become a united Jewish people joining the One G-d with a common consent, helping bring Moshiach Now!