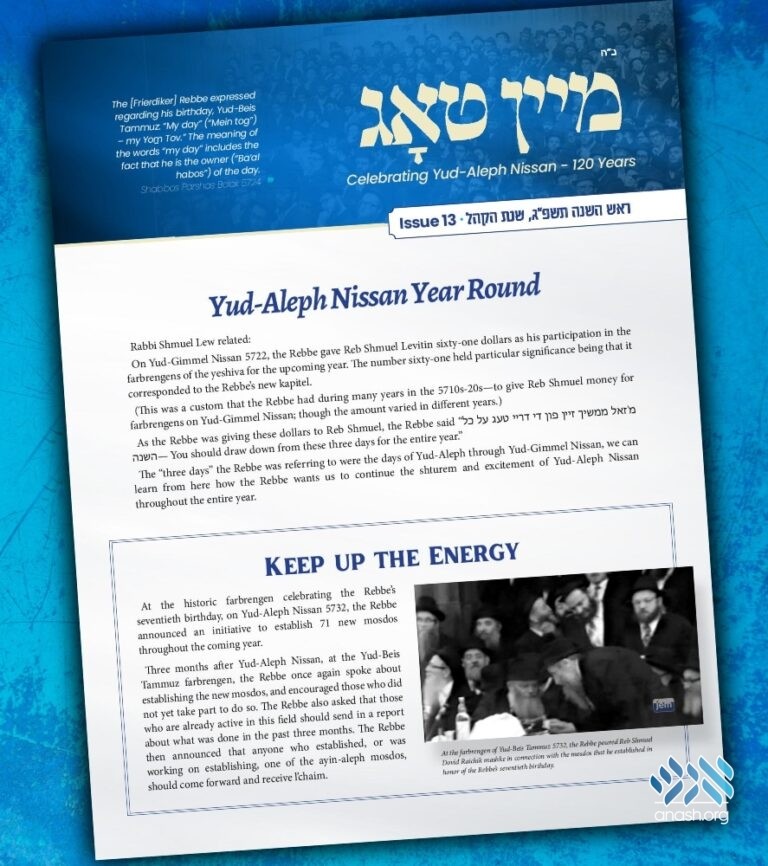 At the request of many Yeshivos and Talmidim Hashluchim, the acclaimed ‘Mein Tog’ weekly English publication published in the weeks leading up to Yud-Alef Nissan – 120 years, is returning for the month of Tishrei.

At the request of many Yeshivos and Talmidim Hashluchim, the acclaimed ‘Mein Tog’ weekly English publication published by the Vaad Talmidei Hatmimim Haolami in the weeks leading up to Yud-Alef Nissan – 120 years and distributed amongst the Yeshivos, is returning for the month of Tishrei.

As the Rebbe would often encourage Chassidim to keep up the excitement and continue their Hachlatos from Yud-Alef Nissan throughout the year, the publication will continue to share interesting content on Yud-Alef Nissan and its relevance now. Additionally, as we enter the year of Hakhel, it will feature a new section with Sichos, Mainos, and stories regarding Hakhel by the Rebbe and our part in this important initiative.

From this week’s issue:

Rabbi Shmuel Lew related: On Yud-Gimmel Nissan 5722, the Rebbe gave Reb Shmuel Levitin sixty-one dollars as his participation in the farbrengens of the yeshiva for the upcoming year. The number sixty-one held particular significance being that it corresponded to the Rebbe’s new kapitel. (This was a custom that the Rebbe had during many years in the 5710s-20s—to give Reb Shmuel money for farbrengens on Yud-Gimmel Nissan; though the amount varied in different years.)